By now, you’ve probably worked out your personal go-to strategy for those times when you discover — a little bit too late — that you’ve eaten too much. Maybe you’re the proactive type, arriving at the table in sweatpants. Otherwise, maybe a quick postprandial nap or a loosened belt is your thing. A new paper published in the journal Nature Communications describes the unique way that starlet sea anemones deal with extra food: They simply grow a pair of new tentacles, as if to make room. 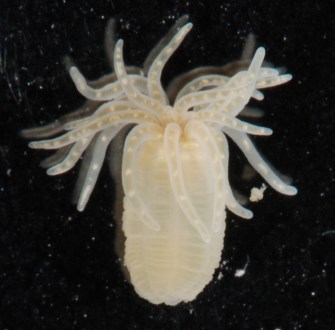 The starlet sea anemone, or Nematostella vectensis, lives burrowed into the mud and silt of coastal salt marshes. Research suggests it’s originally native to the east coast of North America, although it can also be found along the continent’s west coast, around Nova Scotia, and in U.K. coastal marshes.

Being stationary creatures, starlet sea anemones have to reach out and grab nutrition floating by. Their natural diet is mainly copepods and midge larvae, though they’re also perfectly happy eating brine shrimp in a laboratory setting. The anemones grab food with their tentacles whose cilia then wiggle the meal down to their mouths.

In the larval stage, the anemones have a quartet of tentacles, though they may develop up to 24 of them. A more typical amount is 16.

While the starlet sea anemone may grow larger in a lab setting, in the wild its clear, worm-like body typically extends from 10 to 19 millimeters (about three quarters of an inch) in length. Tentacles may add another 8 mm.

Members of the phylum to which the starlet sea anemone belongs, the Cnidaria phylum, have the unique ability to grow new body parts throughout their lives in response to environmental influences. Among these influences are fluctuations in the amount of available food. Nonetheless, no other animal has yet been seen growing new appendages when they get extra sustenance.

Observations of starlet sea anemones in his lab prompted lead author of the paper, Aissam Ikmi of the European Molecular Biology Lab Heidelberg, to undertake the new research. He’d noticed what seemed to be an association between the amount of brine shrimp being consumed and the sprouting of new tentacles.

Ikmi and his team raised over 1,100 starlet sea anemone polyps to which they fed brine shrimp. Some of them began with 4 tentacles while the rest already had 16.

For over six months, the researchers varied the animals’ food supply at cyclical intervals, feeding the anemones for a few days and then stopping for a few days.

The scientists tracked tentacle growth throughout the experiment, creating a spatio-temporal map that identified periods of tentacle growth in relation to feeding cycles.

They found that the anemones grew new tentacle pairs during feeding periods, and new tentacle production did indeed stop when their food supply was temporarily cut off. Tentacle-pair budding occurred at the same time as an anemone also doubled its body size.

“When food was available, however, primary polyps grew and sequentially initiated new tentacles in a nutrient-dependent manner, arresting at specific tentacle stages in response to food depletion.” — Ikmi, et al.

In this illustration from the paper, development from 4 to 12 tentacles is characterized by trans budding. Cis budding is present beginning with 16 tentacles.Credit: Ikmi, et al./Nature Briefing

The team identified two budding modalities, they named “cis” and “trans.” In both modes, pairs of tentacles were produced, budding either simultaneously or consecutively. In:

The experiments also suggest that the starlet sea anemone appears to have ability to make good use of available energy dependent on its situation. Being prevented from spawning, for example, prompted the anemones to grow more tentacles, as if they were rechanneling the energy they’d have otherwise directed to reproduction.
Tags
anemonesbiologybiomechanicsfoodmarine biologynatureocean
In this article
anemonesbiologybiomechanicsfoodmarine biologynatureocean
Related
Neuropsych

These animals to grow scalpel-sharp and precisely shaped tools that are resistant to breaking.
Up Next
Thinking

Thought expriments are great tools, but do they always do what we want them to?