Natural selection takes time. According to the fossil record, sharks, for example, have been essentially the same for hundreds of millions of years. But something’s up lately, and by “lately” we mean the last nine million years. Sharks off of Australia have learned to walk. Not Great Whites, fortunately. Small sharks that feed on coral reefs. Cute sharks, actually.

Scientists have known for some time that five such shark species exist, but new research nearly doubles that number to nine. The new information comes from a 12-year study from an an international team of scientists from University of Queensland (UQ), Conservation International, CSIRO, the Florida Museum of Natural History, and the Indonesian Institute of Sciences and Indonesian Ministry of Marine Affairs and Fisheries published in Marine and Freshwater Research. 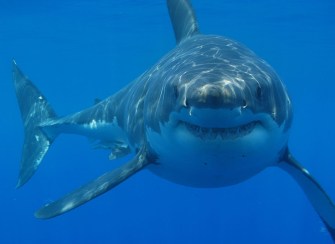 Over the last 400 million years, only about 1,200 shark species have emerged. “We see animals from 180 million years ago with exactly the same teeth,” Gavin Naylor of the Florida Program for Shark Research at the University of Florida tells National Geographic. While it’s true they’re not the most prolific reproducers, and have a long life span, that’s still plenty of time for useful mutations to arise. On the other hand, if it ain’t broke, don’t fix it — Earth and the oceans may change, but as predators, sharks do just fine as they are. Even if, as Naylor says of sixgill sharks, they “seem stuck back in time.”

The walking sharks, or “epaulette sharks,” live in coastal waters off northern Australia and the island of New Guinea. They prowl coral reefs when the tide goes out, walking through shallow water on their pectoral fins in the front and pelvic fins in the back, on the hunt for crabs, shrimp, small fish. They’re adept at wriggling their way into tight nooks to find food, too. “At less than a meter long on average,” says Christine Dudgeon of UQ, “walking sharks present no threat to people, but their ability to withstand low oxygen environments and walk on their fins gives them a remarkable edge over their prey of small crustaceans and mollusks.” Says Dudgeon, “During low tides, they became the top predator on the reef.”

The abilities of the small sharks — they’re less than three feet in length — definitely put them in a class of their own, says Dudgeon: “These unique features are not shared with their closest relatives the bamboo sharks or more distant relatives in the carpet shark order including wobbegongs and whale sharks.”

Though the five epaulette species don’t look much alike, varying in markings and color, their DNA identified them as family. Says Dudgeon, “We estimated the connection between the species based on comparisons between their mitochondrial DNA which is passed down through the maternal lineage. This DNA codes for the mitochondria which are the parts of cells that transform oxygen and nutrients from food into energy for cells.”

The researchers theorize that a few factors may have accelerated the epaulets’ evolution. First off, they keep to themselves in their own separate region, with extensive inbreeding perhaps speeding up the rate of mutation. “Data suggests the new species evolved after the sharks moved away from their original population, became genetically isolated in new areas and developed into new species,” explains Dudgeon. “They may have moved by swimming or walking on their fins, but it’s also possible they ‘hitched’ a ride on reefs moving westward across the top of New Guinea, about two million years ago.”

Another possible factor are the ever-changing reefs themselves. They’re continually in flux as oceans change and as corals live and die, with rising and falling sea levels, as well as changing currents and temperatures. The epaulettes’ success depends on adapting quickly to a very dynamic environment, about which Naylor says, “It’s the shark equivalent of the Galápagos, where you can see shark evolution in action.”

Beachgoers needn’t fear for their tootsies just yet, but just wait another few million years, and who knows?

More than 90% of human faces are home to mites that live in our skin pores. These friendly guests might be merging with us.
Up Next
High Culture

We each have a way of moving to music that is so unique a computer can use it to identify us.