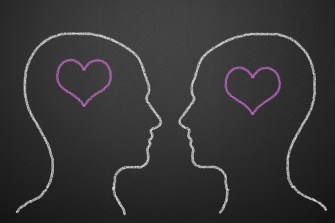 The hormonal surges you feel when you’re in love are particularly impactful the very first time.

Image by Mr.Exen on Shutterstock

Romantic love is an addiction, research says – and your first love is your first dose

A 2005 study by biological anthropologist Helen Fisher concluded that romantic love is primarily a motivation system, rather than an emotion (or set of emotions). This was proven using fMRI (functional magnetic resonance imaging) to study the brains of people who are in love.

What happens in your brain when you fall in love (according to 2017 Harvard Medical School research):

The results of the Harvard study (combined with Fisher’s fMRI study on a brain in love) very strongly suggest that because love provides a kind of chemical feedback in our brains, recreating this chemical response may eventually become our human drive or motivation to stay in love. 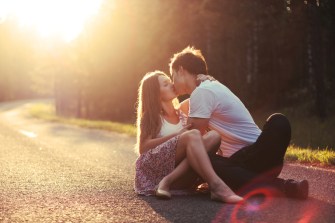 The first time you experience the addiction-like effects of love can leave an imprint on the sensory areas of your brain, research says.

Photo by solominviktor on Shutterstock

With this evidence in mind, we can recall what it felt like to be in love for the first time and to experience all of these hormone surges only to have that taken away when the relationship ends.

Heartbreak is a complex and emotional thing—but there is no heartbreak that hits you quite like the first time.

According to a 2017 study from the Journal of Positive Psychology, 71 percent of people are able to heal from a breakup within a span of 3 months after the relationship has ended. In this context, “healing” meant the participants in the study reported feeling “rediscovery of self” and “more positive emotions.”

Of course, some feelings of sadness, anger, resentment, and pain may linger on for a while longer, but typically you’re able to see past your heartache and into what else life has to offer within 3 months of a relationship ending.

Why is it, then, that our first love seems to hold on for longer?

While research on this specific topic is quite thin, we can speculate the real reason by looking at what we know about what our brains experience when we fall in love. The first time you fell in love, your brain experienced all the things mentioned above (increases in positive hormones, decreases in negative hormones).

Multiple studies have confirmed our brains experience something very much like an addiction when we’re in love—and the first time may be the most important because it’s the foundation. Most likely, you experienced this foundation of love during a time (adolescence) when your brain was still developing.

While we may be triggered to think of our first love in an emotional way when we hear a certain song or see a photo of them on social media, it’s the hormonal imprints that cause the life-long effects we all experience. The hormonal interactions are imprinted in the sensory areas of the brain at a time when the neurological developments we are experiencing are forming who we are as individuals.

Jefferson Singer, a psychologist who focuses on autobiographical memory, says that most people experience a “memory bump” between the ages of 15 and 26. This memory bump happens at a time when we are experiencing all kinds of firsts (driving a car, having sex, falling in love, etc.). Later in life, these memories tend to be more impactful because they occurred when our memory was at its peak.

“We have the opportunity to rehearse it and replay it, rethink it, reimagine it, re-experience it,” says Singer.

This idea is corroborated by cognitive scientists at MIT, who explain that the overall brain processing power and detail memory peak for our brains happens around 18 years old.

First love also affects us psychologically. According to Dr. Niloo Dardashti, a couples therapist based in New York, the feelings we experience with our first love become a blueprint for how we approach future relationships. In a very real way, just as our perception of platonic and familial love is forged in childhood by our parents or caregivers, our idea of romantic love is impacted by how we experience it for the first time.

There is still be much research to be done on the true effects of love on the human brain, but from what we understand so far, love doesn’t just affect us while we experience it. Its impact on our biology can be felt for the rest of our lives.

“How on earth are you going to explain in terms of chemistry and physics so important a biological phenomenon as first love?” – Albert Einstein

Pins and needles, anyone?
Videos

Reality is more distorted than we think.
▸
with
Big Think
Life

These animals to grow scalpel-sharp and precisely shaped tools that are resistant to breaking.
Neuropsych

When you unintentionally step on a dog’s tail, does it know that it was an accident?
Neuropsych

In a way, the human brain is like three brains in one.
Up Next
The Present

Come to grips with the fundamentals of graphic design and master the field’s top tools.