Of course you’re invested in predicting the fate of your own relationship. Psychology researchers are interested as well. Are there recognizable signs that can foretell where a relationship is headed? Typically researchers have tried to puzzle out this question by measuring some aspect of a relationship at one moment in time and then seeing how that measurement coincides with relationship outcomes months or years later. For example, one group found that greater boredom now predicts less relationship satisfaction nine years later.

These types of one-shot measurements are useful, but how you feel about any facet of your relationship fluctuates over time. Some researchers, including Ximena Arriaga at Purdue University, have suggested that the typical method of measuring a single moment in time may not fully capture the relationship experience; it might be more revealing to look at patterns of change as the relationship develops.

To know your relationship’s fate, the ups and downs may matter more than its quality at one specific moment. A 2015 study examined this question by tracking how relationships progressed over time via people’s own changing senses of where things were headed.

Charting the course of love, true or otherwise

If you could chart the story of your relationship, what would it look like? Maybe a straight, ascending line showing steady progress? Or maybe a curvy line showing that you’ve hit some bumps along the way? It’s this trajectory that may influence how your story will end.

In the recent study, researcher Brian Ogolsky and colleagues hypothesized that how individuals’ commitment to wed fluctuated over time would predict future relationship outcomes. To test the idea, interviewers had 376 dating couples in their mid-20’s chart out graphs of how their sense of marriage likelihood (the vertical axis ranged from 0% to 100%) changed over time (time in months appeared on the horizontal axis).

The interviewer plotted key dates, noting where the likelihood of marriage changed, for better or worse. For example, spending too much time with friends, fighting or just being too different could nudge commitment to wed down. Conversely, meeting the partner’s family, spending a lot of time together, having a lot in common and receiving positive feedback from friends or family could make commitment to wed rise.

Participants updated their graphs via short interviews for each of the next seven months, concluding with a final interview nine months after the start of the study. Participants also provided information about changes in relationship status – such as transitioning from dating to broken up, from casual to serious dating, from serious dating to engaged, and so on.

Researchers analyzed the graphs for the number of turning points or changes in commitment to wed, particularly noting any downturns or times when chances of marriage decreased. They also examined the slope or degree of change during turning points to see if things were escalating quickly, slowly eroding or following any of the other trajectories a relationship can take. 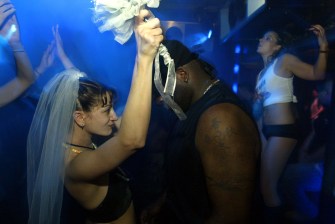 There are always highs and lows, but what’s the trajectory?

Much like boiling your entire personality down into a color or series of letters, fitting your relationship into one of four tidy categories has intuitive appeal. Yet classification is simplification. Our relationships and psychological experiences are complex in a way that defies basic categories or groups; every relationship cannot fit neatly within these four categories. However, they provide one framework for understanding how relationships progress.

So is my relationship doomed?

Importantly, knowing how commitment to wed changed over time was a better predictor of relationship outcomes than the basic measure of relationship quality at the first interview.

Taken together, these results suggest it is good to be partner-focused, but not dramatic. In other words, those who frequently experience substantial fluctuations in their commitment should have concerns about the relationship’s long-term sustainability. The dramatic group may be particularly susceptible to breakup because they maintain so much contact with their social network. Some of these pals may serve as “backburner” relationships in which the person maintains contact for the possibility of starting a later relationship.

Relationships move at difference paces and in different patterns. Whether your relationship is moving quickly or slowly, smoothly or has been a bit rocky, this research demonstrates how your relationship’s past trajectory can offer a glimpse into its future.

Electrochemical methods such as this could someday dramatically reduce greenhouse gas emissions around the planet.