That human behavior is guided by seemingly counter-intuitive actions is well-founded. The person that always talks about being trusting is often the least trustworthy; the one pronouncing unrequited love demands the most sacrifices; those who discuss spirituality at every turn are likely to be morally dubious. How do we know what we really want? Usually, by investigating the opposite of what we claim.

Psychology and biology are not separate domains; they each influence the other, all the time. So it shouldn’t surprise us that substances we are most averse to are also the ones we crave most. At least that’s the finding of a new study published in the Nature journal, Scientific Reports: Coffee drinkers with the highest sensitivity to the bitter taste of caffeine consume the most coffee.

Of the five major flavor profiles, bitter is supposed to be avoided. Bitterness is a signal of toxicity. Of course, hormesis: low doses of a toxic agent produce beneficial effects. Cruciferous vegetables, such as cauliflower and Brussels sprouts, are healthy even though they are slightly toxic; by affecting liver enzymes, they decrease the bioavailability of certain drugs and, when consuming high amounts, may increase allergic reactions.

Yet cruciferous vegetables are also healthy. They also happen to be delicious—though, at it turns out, given my love for coffee, I might have a genetic variant that causes me to crave bitter. My wife scoffs at the 100 percent chocolate bar I eat on a regular basis, though it gives me much greater pleasure than a 70 percent bar that appeals to the flavor profile of sweet. (I also drink my coffee black.)

Here, perhaps, is where biology meets psychology, as Marilyn Cornelis, an assistant professor of preventive medicine at Northwestern University Feinberg School of Medicine who was involved in the study, says:

You’d expect that people who are particularly sensitive to the bitter taste of caffeine would drink less coffee. The opposite results of our study suggest coffee consumers acquire a taste or an ability to detect caffeine due to the learned positive reinforcement (i.e. stimulation) elicited by caffeine.

Interestingly, the study also covers other bitter tastes in tea and alcohol. Cornelis notes that coffee drinkers consume less tea, though it is likely because they’re drinking more coffee, a logic I can anecdotally confirm. 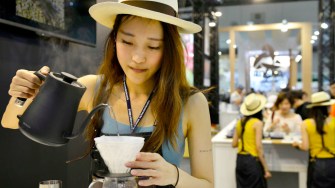 A barista makes a cup of coffee at a display at the Taiwan International Tea, Coffee and Wine Expo in Taipei on November 19, 2018.

The study covered over 400,000 men and women in the UK, focusing on bitter compounds such as propylthiouracil (PROP), quinine, and caffeine. The results were not clear-cut across the board, it should be noted:

So it appears that caffeine is the true culprit. Or perhaps not so much, given the relationship it has to our emotional well-being, not to mention its addictive qualities. The researchers write that it is likely the result of “learned positive reinforcement” that lend coffee true power. Bitterness has a Pavlovian effect in this sense.

Or maybe we’re just a confusing animal with contradictory impulses. Many Americans, for example, don’t vote with their best interests in mind. At least with coffee we do get some reward, fleeting as it is. In the moment, however, nothing could be… sweeter?

You open an app and start scrolling, then suddenly it’s an hour later. Sound familiar?
The Future

Uploading your mind is not a pathway to immortality. Instead, it will create a possibly hostile digital doppelgänger.

A neuroscientist explains how to master your focus.
▸
7 min
—
with
Amishi Jha
Neuropsych

The dark side of neuroplasticity

Long thought incapable of regenerating, we now know that brain cells can grow and reorganize. That, it turns out, is a mixed blessing.
Up Next
Health

A new study confirms that e-cigs damage your heart

The damage might not be “as bad” as traditional cigarettes, but it’s still pretty bad.