The notion that e-cigarettes are “healthier” than regular cigarettes quickly created another billion-dollar industry. The public imagination in the Information Age allowed for such quick transmission of data, even if these data were bogus. It was bad enough that adults were hooked—good enough for non-smokers, who no longer had to deal with toxic fumes trailing smokers. Then kids started getting hooked; the song changed.

By this fall, nearly 20 percent of middle and high school students have partaken in vaping. The e-cig industry was relying on a lack of credible research, not a surplus of honest studies. A “smaller concentration of toxic substances” does not negate harmful effects; it might reduce them, at best. Forget the addiction question, people simply transferred their cravings to another device, or, worse, an entirely new category of smokers were indoctrinated by flavors like Mango Mangue, Gummi Bear, and Blue Raz Cotton Candy.

Under public pressure, Juul, which controls 70 percent of the e-cig market in the United States, announced it would stop selling most flavored pods in retail outlets, pre-empting FDA plans to tighten regulations on teen smoking. Juul Labs is dedicating $30 million to independent research to battle this trend (transparency about the studies and researchers are hopefully forthcoming; corporations sponsoring research rarely works out well for the public). Their move is equivalent to Nestle launching an anti-sugar crusade to combat youth obesity.

Dangers of e-cigarettes, vaping and JUULs: How to talk to kids

The reality is Juul would have had to have done this anyway, if it hoped to save face. Given how long and hard the cigarette industry has fought regulations and attempted to assert its will into the fabric of society through questionable marketing, it’s hard to imagine this as a purely benevolent move. Vaping might be “healthier” than smoking, but the idea that it’s not dangerous is laughable.

For example, in August a study at the University of Birmingham discovered that vaping liquid produces inflammatory cytokines, which over the course of decades could contribute to heart problems. Now a new study that was recently presented at the American Heart Association’s Scientific Sessions confirms that, like traditional cigarettes, e-cigs cause endothelial cells to produce less nitric oxide, leading to heart damage.

Nitric oxide (NO) is a byproduct shared by almost all forms of organic life. The inner lining of blood vessels (endothelium) use nitric oxide in vasodilation, widening blood vessels, to increase blood flow. Producing less NO results in constricted blood flow, one of the main reasons regular smokers suffer from cardiovascular damage. 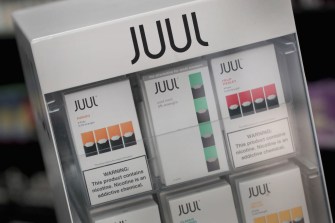 The FDA has ordered e-cigarette product makers to devise a plan to keep their devices away from minors, declaring use by teens has reached an ‘epidemic proportion’.

Dr. Leila Mohammadi, the lead researcher on this latest study and a postdoctoral fellow at the Cardiovascular Research Institute at the University of California, San Francisco, notes that in this regard, vaping is not much safer than cigarettes.

We showed that blood serum from electronic cigarette users has harmful effects that are similar to that of (tobacco) cigarettes on endothelial cell functions. This harmful effect is likely to adversely affect arteries and cardiovascular health.

University of Louisville professor of medicine, Aruni Bhatnagar, notes that the tobacco industry has a vested interest in promoting the idea that e-cigs are safer. Big players in tobacco, such as R.J. Reynolds, British American Tobacco, and Altria (formerly Phillip Morris) all have vaping divisions that are driving more and more revenue into their coffers. The device changes while the addiction remains the same.

The latest study’s principal investigator, Matthew Springer, sums up the whole cigarette vs. vaping debate in the simplest terms possible. It’s an argument that anyone employed in the tobacco industry will continue to fight against, regardless of how basic this knowledge is.

Anything you inhale other than clean air seems to be causing vascular problems. Rather than try to find the things to inhale that aren’t as bad as cigarettes, we might have to realize (we need) to just breathe clean air.

The human brain makes a striking deviation from the normal building plan.
The Future

Some of the most popular “anti-aging” diets show promise in rodent studies. But are they effective for humans?
Up Next
Life

Science, power, and wisdom: Does anyone make it?