As one human body gives birth to another, so many things have to, and usually do, go right. It’s known that substances a mother ingests can influence the success of fetal development. Modern mothers are careful regarding the consumption of alcohol, associated with a wide array of problems during fetal development and later in life.

Researchers have also investigated the impact of coffee consumption during pregnancy. It’s known that caffeine easily traverses the placenta and that a fetus lacks the enzymes necessary to break down this known neuroregulatory compound. Studies have found that the coffee’s caffeine can result in lower birth weights when too much of the beverage is consumed.

Now a substantive study from researchers at the Del Monte Institute for Neuroscience at the University of Rochester states definitively that coffee during pregnancy can change important fetal brain pathways that may lead to behavioral issues later in life.

What’s too much coffee? First author Zachary Christensen says, “Current clinical guidelines already suggest limiting caffeine intake during pregnancy—no more than two normal cups of coffee a day. In the long term, we hope to develop better guidance for mothers, but in the meantime, they should ask their doctor as concerns arise.”

This guidance may change as a result of this study, notes principal investigator John Foxe, who says, “I suppose the outcome of this study will be a recommendation that any caffeine during pregnancy is probably not such a good idea.”

The study is published in the journal Neuropharmacology. 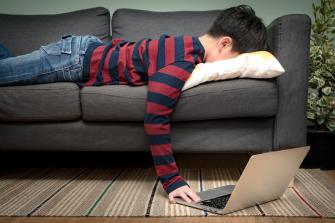 For the study, researchers analyzed brain scans of 9,000 nine and ten-year-olds. Based on their mothers’ recollections of their coffee consumption during pregnancy, the researchers found that children of coffee drinkers had clear changes in the manner in which white brain matter tracks were organized. These are the pathways that interconnect brain regions.

According to Foxe, “These are sort of small effects, and it’s not causing horrendous psychiatric conditions, but it is causing minimal but noticeable behavioral issues that should make us consider long-term effects of caffeine intake during pregnancy.”

Christensen says that what makes this finding noteworthy is that “we have a biological pathway that looks different when you consume caffeine through pregnancy.”

Of children with such pathway differences, Christensen says, “Previous studies have shown that children perform differently on IQ tests, or they have different psychopathology, but that could also be related to demographics, so it’s hard to parse that out until you have something like a biomarker. This gives us a place to start future research to try to learn exactly when the change is occurring in the brain.”

The study doesn’t claim to have determined exactly when during development these changes occur, or if caffeine has more of an effect during one trimester or another.

Foxe cautions, “It is important to point out this is a retrospective study. We are relying on mothers to remember how much caffeine they took in while they were pregnant.”

So as if being pregnant wasn’t difficult enough, it sounds like the most conservative and safe course of action for expectant mothers is to forgo those revitalizing cups of Joe and switch to decaf or some other un-caffeinated form of liquid comfort. We apologize on behalf of science.

Caffeine does something, but it’s not clear exactly what.
Up Next
Starts With A Bang

And Dr. Jill Tarter never once lost her composure.One of the most fascinating questions in all of science is: “are we alone?” Since our distant ancestors first gazed at the […]