In 1922, an Iowa man named Charles Osborne was preparing to butcher a hog. As he was lifting the 350-pound carcass, he fell. He didn’t report any pain to his doctor. But he did walk away with a strange medical condition that earned him a spot in the Guinness Book of World Records: the longest bout of hiccups.

Osborne hiccuped for 68 consecutive years. In total, he hiccuped an estimated 430 million times, at a rate of up to 40 hiccups per minute. He tried numerous home remedies. None worked. Then, one year before his death in 1991, his hiccups mysteriously stopped.

That’s an extreme example of a hiccup attack. But even for much shorter episodes, called transient hiccups when they resolve within 48 hours, it can be hard to find a home remedy that works reliably, if you find one at all.

A new remedy recently had its hiccup-quashing abilities put to the test. The “forced inspiratory suction and swallow tool,” marketed as the HiccAway, is basically a drinking device with a specialized straw that requires forceful suction to draw liquid.

The idea is to stimulate the same body parts that execute the involuntary hiccup response, so much so that they stop triggering hiccups. (The official medical term is singultus, from the Latin word “singult,” which means gasping while sobbing.)

What happens during hiccups?

When you hiccup, your diaphragm — a large, dome-shaped muscle beneath the lungs — involuntarily contracts. This spasm causes the sudden closure of your epiglottis, a flap of cartilage at the root of the tongue that closes when you swallow so that food and liquids don’t enter the lungs. The shutting of your epiglottis is what makes the “hic” sound during hiccups. 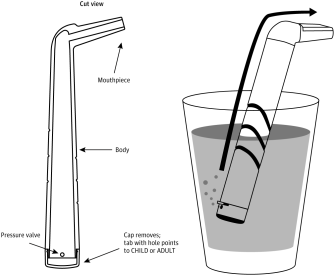 The tool has a mouthpiece on the top, a body in the middle, and an adjustable cap with a pressure valve on the lower end.Alvarez et al.

“HiccAway can instantly stop hiccups by generating enough pressure while sipping from the device to lower the diaphragm while simultaneously activating the leaf-shaped flap in the throat, known as the epiglottis,” the company writes on its website. “Doing this stimulates two key nerves, the phrenic and the vagus nerves, which are responsible for the hiccups. This allows the brain to reset and stop hiccups.”

To test the efficacy of the tool, researchers with the University of Texas Health Science Center at San Antonio sent the HiccAway to more than 600 people who reported having hiccups at least once a month. The results showed that the tool stopped hiccups 92 percent of the time for the 249 participants whose responses were validated in the study. More than 90 percent of participants said it was more effective than home remedies.

“Many home remedies consist of physical maneuvers designed to stimulate contraction of the diaphragm and/or closure of the epiglottis,” stated a study published in JAMA Network Open. “These maneuvers lack clear, standardized instructions and can be cumbersome to perform, and there are few, if any, scientific studies of their effectiveness.”

Still, it’s worth noting that the results were based on self-reported data, and the study didn’t feature a control group. Future research could compare the efficacy of HiccAway with a device that looks similar but doesn’t function.

It’s also worth pointing out that you don’t need a $14 device to stimulate the vagus and phrenic nerves. You may just need a glass of water and a straw. A 2006 article published in the British Medical Journal noted that “plugging both ears tightly, pushing both right and left tragus, and drinking the entire glass of water through the straw without pause, without releasing the pressure over the ears” is a “nearly infallible” method to stop hiccups.

What if nothing stops your hiccups? Consider consulting a doctor: Persistent hiccups can signal underlying medical conditions, including pancreatitis, pregnancy, and liver cancer, among others.

Tags
diseasehealthhuman bodyLife Hacksmedical researchmedicinescience
In this article
diseasehealthhuman bodyLife Hacksmedical researchmedicinescience
Related
Thinking
Why you should laugh at yourself, according to Seneca and Nietzsche
“It is more human to laugh at life than to lament it.”
Starts With A Bang
This one-page calendar will change how you view the year
It’s simpler, more compact, and reusable from year-to-year in a way that no other calendar is. Here’s both how it works and how to use it.
Health
COVID, RSV and the flu: A case of viral interference?
Viruses, it turns out, can block one another and take turns to dominate.
Health
Chantix, Trulicity, Xeljanz, and most drugs advertised on TV are of “low therapeutic value”
Close to 70% of drugs advertised on TV offer little to no benefit over other cheaper drugs.
Neuropsych
Shopping with your nose: How body odors influence your buying behavior
Sniffing out a deal.
Up Next
Starts With A Bang
Exploring The Universe That Wasn’t
How slight differences could have forever changed our cosmic history.13.8 billion years ago, what we know today as our Universe began with the hot Big Bang. Filled with matter, antimatter and […]