The study shows hearing loss and cognitive decline are linked, and maintaining healthy hearing can keep you sharper for longer. Photo credit: Keith Bedford / The Boston Globe via Getty Images

Cognitive decline is something that happens to all of us as we age, to varying degrees. But new research is showing that taking care of your eyes and ears as you age could help keep your brain sharp for longer than previously thought.

The participants’ cognition was measured using a range of tests, for example a word recall task of 10 words. One measure was taken directly after the words were read aloud, and another measure was taken after the participants were made to perform other small tasks (in order to distract them from the word-memorization). In people with hearing aids, the rate of decline was 75 percent slower than those without hearing aids. 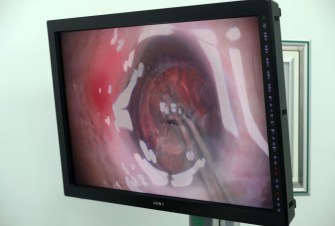 A 3D display screen of three-dimensional display system for cataract extraction surgery is seen at the Second Affiliated Hospital of Zhejiang University School of Medicine on July 17, 2018 in Hangzhou, Zhejiang Province of China.

Likewise, cataract surgery can slow cognitive decline by 50 percent, according to a separate study performed by the same team as the hearing study. The study consisted of about 5,000 people in their sixties, with 2,068 of them receiving cataract surgery and 3,636 of them having no cataracts. In those who had cataract surgery, cognitive decline slowed down over the course of 13 years of follow-up testing. Their mental function became more equal to the control group, who had no cataracts. While decline is still expected as people age, this is promising in the fight against dementia.

At the conclusion of the study, the researchers highlighted that further research is needed to find out exactly what the link is between cataract surgery and potentially decreasing the risk of dementia:

“A positive impact of cataract surgery on cognitive decline would support the presence of a direct or indirect causal impact of visual impairment on cognitive aging. Further research may test the potential for treatment and/or prevention of vision impairment to lower the risk of dementia.”

Take care of your eyes and ears as you age

The reason cognitive decline is affected by vision and hearing may be due to the nerve stimulation provided to the brain by those sensory inputs, which disappear as you age. These studies hint that stimulation can be returned through interventions like hearing aids and eye surgery. There may also be something psychological at play, as audiologist Dina Rollins notes to NPR:

“Social isolation is a huge part of hearing loss, and people will notice their loved ones withdrawing from conversation, or not going to family or social functions like they used to.”

That social isolation can kick-start a hastening spiral of loneliness that fuels further cognitive decline. In fact, loneliness is a more accurate predictor of early death than obesity, so watch out for reclusive signs in your loved ones and yourself. There’s also plenty of evidence to show that feeling old and resigning yourself to aging is what actually ages you prematurely.

The big takeaway from these companion studies? Get hearing aids as soon as you need them, and take care of your vision with regular checkups.

A boy in Germany seems to be the first person to be cured of a rare and painful skin condition commonly called “butterfly disease.”
Neuropsych

Geometric or tabular icebergs are a thing, and they’re kinda beautiful.