Health care should be a public right today, especially in wealthy nations such as America, though for most of history such support systems were impossible. Social health initiatives are relatively new. Bureaucratic European states instituted such programs, but it was not until Germany introduced the “medical police” in the late 17th century that widespread programs started to take root. Johan Peter Frank helped construct the ideological underpinnings of this movement in a nine-volume series of books that took 48 years to write.

Frank was a champion of inoculation, the burgeoning practice of introducing small amounts of a disease — in this case, smallpox — into a person, which allowed their immune system build up defenses against a full-fledged ravaging virus. Inoculation itself dates back at least to ancient China; Frank was merely giving bureaucratic form to the formula.

By the middle of the 18th century, such inoculations were widespread, though an ignorance of proper dosage still lead to many deaths. While royalty and the wealthy were first in line, a physician named Edward Jenner brought it mainstream by injecting cowpox into a young boy who became immune to this ailment. Jenner called it a “vaccination,” after the Latin word for “cow.”

Decades later, the British Public Health Movement enforced compulsory vaccination. This led to an intense scrutiny of the major causes of disease, such as poverty, child labor, water supply, and prostitution. A linkage between our social environment and disease was forged. Public health reforms in Britain and America were instituted, with the World Health Organization being formed in 1948 to study and fight disease on a global scale.

Such efforts made a huge impact. Malaria was cut down in many countries. Perhaps the biggest victory was smallpox, whose last known case occurred in 1977. In May, 1980 the agency announced its extinction. Other chronic diseases have been greatly restricted: polio, measles, and tetanus are confined, while influenza, HPV, and chicken pox have been verified as ailments that vaccines minimize.

Then, in 1998, a now-discredited British doctor, Andrew Wakefield, was paid to falsify evidence linking the MMR vaccine and autism. The paper was eventually retracted. Yet it was published during a time when conspiracy theories were growing thanks to a new communications device called the internet. Rightfully-confused and upset parents were seeking a cause to the growing number of autistic children. Wakefield offered an answer, of sorts.

Problem is, that answer didn’t address the question of making us healthier. Not only do vaccines not cause autism, the anti-vax movement that has grown from his deceptive paper is making us sicker. Last year in Minnesota the worst measles outbreak in generations occurred in a Somali population that received false information from an anti-vaxxer group. It’s not only America: in 2016 in Europe there were 5,273 cases of measles. Due to anti-vaxxer fever, just one year later 21,315 people fell ill to a disease that has been successfully fought since 1960.

And now, this disturbing news was recently published regarding American children:

The percentage of children under 2 years old who haven’t received any vaccinations has quadrupled in the last 17 years, according to federal health data released Thursday. 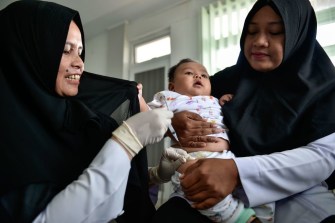 A medical worker injects a baby with a measles-rubella (MR) vaccine at a health station in Banda Aceh in Aceh province on September 19, 2018. Photo by CHAIDEER MAHYUDDIN / AFP

The CDC notes that coverage was lowest among the uninsured and children covered under Medicaid. A free, federally-funded Vaccines For Children program exists, causing The Washington Post to speculate that at least part of this issue might be education.

Yet really, this entire debacle is indicative of a lack of education. Vaccine researcher Peter Hotez, whose daughter suffers from autism, has published a book detailing the issue, in which which he explains:

From my experience, a majority of vaccine-hesitant parents are not deeply dug in. They’ve gotten misinformation from anti-vaccine websites and social media, or they’ve heard something unsavory about vaccines from friends and relatives… Then there’s another group, maybe 10 to 20 percent who are deeply dug in and believe all of the fake conspiracy theories. Those individuals are really difficult to reach.

For most of history, disease was ambiguous, random, metaphysical even — there is no dearth in literature relating sickness with gods and demons. It was long thought karma was the reason you fell ill or died. We know better today, yet too many people refuse to recognize this basic fact, placing their faith in biological mysticism. This is child abuse, yet sadly this is akin to smartphone addiction: we’re simply not ready to label it as such on a societal scale.

Vaccine science is not perfect. Each year, the efficacy of the influenza vaccine is an educated guess. However, just because researchers haven’t nailed every facet of disease does not mean we should write off the science. Millions of lives have been saved due to vaccines. Now, if current trends continues, millions more will be put at risk.

The majority of American children are vaccinated. I’ve heard complaints by a number of friends whose children are put on a rigorous schedule from birth; their skepticism of the validity of this approach is warranted. We should debate courses. We should not, however, debate basic science, such as vaccinating children for measles or polio. Parents putting their children at risk due to their own lack of common sense is not only unfair, it’s dangerous.

The first human that isn’t an Earthling could be in our lifetime.
▸
5 min
—
with
Robert Curbeam
Up Next
Starts With A Bang

If You Traveled Far Enough Through Space, Would You Return To Your Starting Point?

Could the Universe loop around on itself? And, if so, might an intergalactic journey bring you back to your home planet?Back when people thought the Earth was flat, it was almost […]