Andrew Wakefield’s infamous 1998 study connecting autism with the measles, mumps, and rubella (MMR) vaccine raised skeptical eyebrows shortly after its publication. It took the journal 12 years to retract the paper, however, and by then its contents had been broadly disseminated. In 2006, investigative journalist Brian Deer revealed in the Sunday Times of London that Wakefield had been paid over £400,000 to fabricate his findings.

By then, the denounced “scandal” had been released to the masses. A small but extremely loud faction took Wakefield’s bait, however. They’re still chewing on the debunked carcass, but interestingly, as a new study points out, the underlying reasons for this movement diverged. It’s no longer all about autism.

The study, led by University of Pittsburgh professor Brian A. Primack, focuses on parents reluctant to vaccinate their children. This paper comes in the wake of Facebook’s announcement that it will “tackle vaccine misinformation” by removing “vaccine hoaxes” on its platform. Instagram and Amazon are also following along.

The study was inspired after researchers noticed a flood of comments on an informational video about the HPV vaccine from more than 800 people. The team chose a random sample of 197 comments, studying the profiles of each respondent in depth. While also observing political affiliations (56 percent Trump supporters), gender (89 percent female), and geographical location (California and Texas being the most common), the team discovered four main drivers fueling anti-vaxxers.

In the 21 years since Wakefield’s discredited study, the reasoning has morphed while the underlying fear remains the same. Uncertainty about the efficacy of vaccines is not new; when Edward Jenner introduced the term “vaccination” into medical nomenclature in the 18th century, skeptics abounded.

Check the timeline: soon after the adoption of vaccines (along with other medical advancements, including the discovery of germ theory), world population hit one billion people for the first time after more than 200,000 years since the genus homo split from apes. Two hundred years later since they came into the picture and today now seven billion human beings walk around. While not an argument in favor of such proliferation, which is proving unsustainable, vaccines effectively cured many issues related to mortality.

An unhealthy modern skepticism, powered by the easy spread of misinformation on social media, is reversing those trends, though. And, because of this, there is an ethical argument to be made for combating this rhetoric online. As Alex Berezow and Ethan Siegel note,

“When we choose to live in a society, there are certain obligations — both moral and legal — to which we are bound. You cannot inflict harm or infringe on the rights and liberties of those around you.”

Whether financially incentivized or prone to conspiracy, a growing cadre of anti-vaxxers is moving us backward. Below are the four main reasons why this is the case. 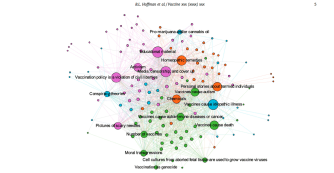 Mistrust of Science and Government Agencies

Given our current political climate it makes sense that many citizens don’t trust the government. This sentiment isn’t limited to the current administration; long-standing issues of deception and misinformation have created an incredulous public. This has inspired numerous factions that lead with “personal liberty” on every issue, vaccines included.

As Berezow and Seigel write in Scientific American, “freedom” does not entail putting others at risk. That’s not liberty; it’s stupidity. There are credible reasons why certain children cannot be vaccinated — putting them at risk because of a Facebook meme should not be one of them. It is irresponsible. What follows are situations such as this anti-vaxx mother asking how to protect her three-year-old in the wake of a measles outbreak.

The answer: vaccinate your child.

We should not weigh deception by politicians against the good work being done by the many scientists and researchers tasked with finding cures to diseases. Public health is an ongoing and at times contentious occupation. The field changes as diseases mutate and confound. This is the nature of science: to evolve with the evidence, which at times requires honesty about previous misgivings. Writing off the many well-intentioned researchers because you’ve confused their work with the rantings of incentivized congressmen and senators leads to reckless decisions.

The origins of the anti-vaccine movement

The origins of the anti-vaccine movement

The basis of this reason is also understandable. I’ve heard horrible tales of aggressive vaccine scheduling. Research should be conducted. Using Facebook as your go-to source is not the best idea, though. As the researchers write:

“A common feeling in the commentary is the belief that parents are more well-informed than physicians about the dangers of vaccines.”

Perhaps a dialogue with your doctor instead? An anecdotal example: I’ve covered literature debating the dangers of dietary cholesterol. When my doctor wanted to immediately put me on a statin after an uptick in my levels, I debated the decision. While I suffer genetic high cholesterol, I’m not certain a lifetime of statins is the best decision.

Instead of just refusing, however, we engaged in a long conversation, going point by point based on collective research. Granted, not all doctors are willing to engage so openly, which is its own problem. We’ve decided to monitor my levels over the next half-year and mutually agree how to proceed.

Unfortunately, children cannot debate. This means parents have to better educate themselves on what vaccines are necessary and, if they so choose, which to skip. That burden falls not just onto parents, but physicians as well. As the researchers note, only 5–15 percent of online respondents identify as medical professionals. More doctors need to take advantage of social media to better inform their patients and the public at large.

While the first two themes require nuance, the second pair does not. Yet these reasons must be taken seriously. If anything, they are more dangerous, as the above can lead to valuable discussions and dialogues. Engaging with conspiracy theorists is predominantly a lesson in futility. But we cannot ignore them.

As previous research has shown, believing in one conspiracy theory makes it likely that you’ll fall for others — it’s a style of thinking. The second most common topic in the Pittsburgh study was “media, censorship, and ‘cover up.'” Distrusting the government on one topic can make you susceptible to any number of insane theories (such as the notion that vaccines cause autism). Then again, two decades is nothing in the larger scope of time: the legacy of the John Birch Society fluoridation scare remains popular today. Cautious skepticism is healthy; contrarianism for the sake of it is not.

Let’s stop calling it “alternative” medicine. A 2017 review speculates that the “complementary and alternative” market will generate $196 billion by 2025. That is a gargantuan industry, not a group of alchemists brewing Peruvian elixirs in a cave. A wide range of systems fall within this category, some worth pursing, many not, as there is simply medicine that works and medicine that does not. The alternative to working is inefficacy. Besides, the reason many treatments work is due to placebo.

Your homeopathic concoction is not going to accomplish what a vaccine does, even if they share similar philosophical roots. The fact that the authors note that some anti-vaxxers “also expressed vegan activism” clues you into the mindset: the pursuit of inner purity and natural remedies trumps the weird stuff invented in a laboratory. Problem is that weird stuff has saved millions of lives.

Nature isn’t always here for our benefit. In many cases, humans evolved despite nature, not because it was helping out.

It took us 200,000 years to make widely available vaccinations. Perhaps it shouldn’t be surprising that armed with a little knowledge and a contrarian attitude, laptop warriors are battling common sense with such vehemence. Not surprising, but tragic all the same, especially for children suffering the results of such foolishness.

Humanity’s most advanced tech still hasn’t unraveled the mysteries of the human mind. Can brain scans show us how we store memories?
▸
with
Lisa Genova
Up Next
The Present

What is the Japanese blood type theory of personality?

In some Asian countries, what’s in your blood determines who you are.