Andrew Wakefield’s 1998 study linking vaccines with autism was riddled with holes. All 12 children involved were handpicked, which is antithetical to clinical research. The now-deregistered physician falsified results. Wakefield used microscopic-level stains to make his case; a more reliable molecular method found no evidence of a link between vaccines and autism.

Add to this the fact that parents of study subjects, some with their own agendas (such as litigation), kept changing the timeline of their child’s conditions. During all this time when Wakefield was raging against the vaccine, he filed for two patents on single measles shots. It was a money play from day one.

Twenty-three years later, the vaccine-autism myth remains in circulation despite decades of contrary evidence. Six years after the study was published, 10 of the 13 authors of their paper retracted their findings. It took The Lancet a few more years; in 2010 the publication finally retracted the paper. Journalist Brian Deer documented Wakefield’s scam for years. Still, the lie persists.

Science’s replication crisis is well-known. But the research community is suffering from another serious problem, one ill-fated for the social media age: the retraction crisis.

Will America’s disregard for science be the end of its reign? | Big Thinkwww.youtube.com

As science journalist (and former marine biologist) Fanni Daniella Szakal recently pointed out, retracted papers are still being cited and used as gospel even when—sometimes it seems especially when—data are intentionally fabricated. Currently, roughly four retractions occur per 10,000 publications, with the highest percentages being in medicine, life sciences, and chemistry journals.

That overall number might not seem high yet those retracted studies have an outsized influence. Wakefield claiming the MMR vaccine causes autism as a ruse to patent his own vaccine is the most infamous example, but there are others. 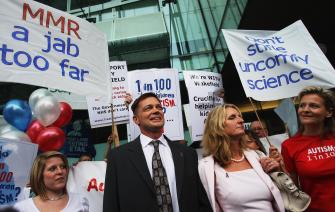 As Szakal notes, a solid grasp of science matters considering research drives policy and healthcare decisions. We can’t possibly expect every paper to get it right, but unfortunately, we also have to factor in biased researchers pushing forward their agendas. While the publication of such research is troublesome, Szakal takes particular issue with the authors and publications that continue to cite them after they’ve been retracted.

More than just a critique, however, Szakal suggests a path forward.

“In each and every publication, author guidelines should include that the author is needed to check all citations for possible retractions. Today numerous citation software are available to do this with ease; such as Zotero, scite.ai, and RedacTek alert users for any retracted papers in the reference list. As well as more care from authors, preventing post-retraction citations is a responsibility of publishers too. Along with double-checking the reference list of papers to be published, they should also make sure that retraction notices appear on all platforms where the study is available.”

The past year has proven how dangerous scientific misinformation (and, even more disturbingly, disinformation) is to public health measures. The frantic urgency of social media platforms and the speed with which we consume headlines without reading articles makes teaching good science even more daunting. At the very least, we need the gatekeepers to take more responsibility for their publication process. Being the first to break bad science is way more socially damaging than being the tenth to publish science worth repeating.

Tags
biologychemistryCurrent Eventsmedical researchpublic healthsciencesociety
In this article
biologychemistryCurrent Eventsmedical researchpublic healthsciencesociety
Related
The Present
Climate change is altering the chemistry of wine
Smoke taint from wildfires is gross, even to wine amateurs.
The Past
How the death of alchemy gave birth to modern science
Far from practicing witchcraft, the experimentation of medieval alchemists helped bring about the Scientific Revolution.
Strange Maps
Europe’s stunning digital divide, in one map
Some Europeans really don’t want to use the internet.
Health
Chantix, Trulicity, Xeljanz, and most drugs advertised on TV are of “low therapeutic value”
Close to 70% of drugs advertised on TV offer little to no benefit over other cheaper drugs.
The 10 biggest world threats of 2023, ranked
Rogue Putin is the biggest risk of 2023. Here are the other nine, explained by global political expert Ian Bremmer.
▸
17 min
—
with
Ian Bremmer
Up Next
Career Development
5 ways COVID has impacted women in the workplace
Since 2015, the Women in the Workplace report has evaluated the successes of women in corporate America alongside the challenges they face. Sponsored by McKinsey & Co. and Lean In, […]