In 2000, the United States declared that measles had been eliminated. This public health victory was part of a two-century long battle against disease kicked off by Edward Jenner’s discovery of vaccines. The concept of vaccination, though, is much older; Jenner was the great popularizer. His cowpox vaccination began a line of research that continues to this day as researchers around the planet seek a vaccine for COVID-19.

In 2019, measles cases surged in America, with the highest number of citizens infected since 1992. An ironic year, perhaps, given that Andrew Wakefield claimed to link vaccinations and Crohn’s disease in 1993. That notion was roundly disproven, but peer-reviewed research did not stop the British physician. Wakefield’s next target became finding a connection between the measles, mumps, and rubella vaccination and autism—again, ironic, as he filed a patent for his own single-jab measles vaccine while denouncing the one in circulation. Later, with the anti-vax movement in full-swing, Wakefield even invented a disease called autistic enterocolitis, for which, of course, he sold a cure.

Wakefield was ultimately discredited; his medical license was taken away. The movement he started continues to grow in size and influence. Why? A team of researchers at Texas Tech University offer a clue: vaccination skeptics tend to overestimate dangers associated with everything.

Tyler Davis, an associate professor of experimental psychology at TTU, and Mark LaCour, a doctoral student in psychological sciences, recently published their findings in the journal Vaccine. The main drivers of vaccine hesitancy include a predilection for believing in conspiracy theories, distrust of the medical system (and governing bodies in general), media exposure, and a preference for alternative medicine. They also note distal causes, such as fear of needles and excessive emotional reactivity toward world events.

Davis and LaCour sought a foundational belief system underlying the numerous causes for vaccine skepticism. They surveyed 158 participants to discover that thread: those hesitant toward vaccines are more often than not skeptical of any potential threat.

Potential is an important word. Vaccines are one of the most sound and effective medical practices we’ve discovered. Yet our brains are wired to perceive danger and will often look for outliers if everything is humming along smoothly. For every million people that don’t get measles, if there is one who has an adverse reaction and dies (which does happen), skeptics exploit that case in order to market their beliefs.

This is a perception that relief charities, for example, exploited long ago: show a singular starving child instead of a statistic displaying a million starving children. Then, we’re more likely to donate. In the case of charities it was an important realization. With vaccination skepticism, the opposite is true.

Davis expresses surprise that vaccine hesitancy so consistently lines up with other forms of mortality-related events. He notes,

“Here we saw an overestimation of rare events for things that don’t have anything to do with vaccination. This suggests that there are basic cognitive or affective variables that influence vaccine skepticism.”

Participants were asked to rate the frequency of death associated with 40 separate instances, including cancers, fireworks, and car accidents. Those who overestimated the rate of vaccine deaths also overshot when it came to other causes of mortality.

As a control, each volunteer was asked to rate the frequency of neutral or positive events, such as how many Willie Nelson concerts or papal visits occur. Vaccine skeptics did not overestimate these percentages nearly as often. 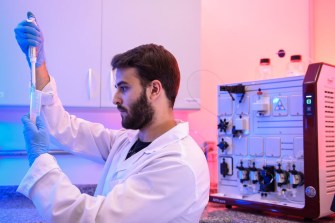 Bruno Cassaro de Andrade, a chemical engineering student, works with a test during the method of separating specific proteins to be applied in the production of vaccines on March 24, 2020 in Belo Horizonte, Brazil. The Ministry of Health convened The Technological Vaccine Center of the Federal University of Minas Gerais laboratory to conduct research on the coronavirus (COVID-19) in order to diagnose, test and develop a vaccine.

LaCour notes that skeptics appear to exhibit poor judgment in regards to probability. “They might be more easily swayed by anecdotal horror stories,” he says.

“For example, your child can have a seizure from getting vaccinated. It’s extremely rare, but it is within the realm of possibility. If you were so inclined, you could follow Facebook groups that publicize extremely rare events. These cognitive distortions of anecdotes into trends are probably exacerbated by decisions to subscribe to statistically non-representative information sources.”

The authors rightfully express excitement over these findings. They believe it could provide insight into reaching anti-vaxxers in the future, perhaps by exposing them to “pro-attitudinal information.” A bit optimistic, given that prior studies show that anti-vaxxers dig their heels in deeper when shown pro-vaccination literature. Still, if there’s ever a time that we need to understand the efficacy of vaccinations, it is now.

As often happens during crises, the coronavirus pandemic has stirred up an inordinate amount of fear and confusion. Anti-vaxxers are having a moment, just the wrong one (as if there’s ever a right one). The anti-Bill Gates sentiment is overwhelming even as his foundation has pledged billions of dollars to help develop a vaccine. Misinformation is rampant.

Davis and LaCour’s study focuses on mindset, though in the beginning they differentiate cognitive influences from cultural and affective influences. I’m also not sure it’s possible to differentiate between affect and cognition. Feelings give rise to cognition; consciousness, at least the perceptive component, is culture-dependent. You simply cannot intellectualize someone’s gut feeling away.

Considering the culture of fear that America harbors, it’s difficult to imagine how we move beyond science skepticism, even when the science is in our own best interest. What you’re looking for determines what you see. At some point a COVID-19 vaccine is going to arrive. That anyone will die after that date due to hesitancy will only add another tragic chapter in this ongoing saga.

In an animal study, it blocked the drug from crossing into the brain.
Up Next
Starts With A Bang

It’s not the only one of its kind, but it’s definitely makes no sense without dark matter.Throughout the Universe, galaxies and star clusters come in all different sizes and masses.This NASA/ESA […]