Vaccine hesitancy is top of mind for global public health officials, and the reasons for this resistance are manifold. A group of American researchers recently focused on social identity as a motivating factor. Their study, published in the journal Politics, Groups, and Identities, found that group identification was an important factor for just over one-fifth of citizens.

Anti-vaxx social identification (AVSID) includes 22 percent of Americans — 14 percent of whom identify as “sometimes” resistant, while eight percent claim to “always” refuse vaccines. While on its face this appears to be a medical decision, the research team, led by Oklahoma State University political scientist Matt Motta, sought to discover the relevance of group acceptance.

Previous research has found that anti-vaxxers conform to in-group norms by expressing skepticism against anyone that questions their autonomy and rejecting broader public health recommendations by out-group experts. Such resistance, they write, may result from identity protective cognition, that is, the avoidance of anything that challenges deeply held beliefs.

For this study, the team relied on the following two psychological theories:

SIT argues that categorization can lead to identification depending on how personally each individual takes the content matter. In this case, when vaccine resistance provides self-esteem and personal meaning, then heightened group identification will merge with their identity. SCT steps in to cement the individual relationship to the content (vaccine resistance) and provides context for the group to flourish.

“Upon socially identifying with a group, people come to understand group membership in comparison to those not in the group, or to those in opposing groups. People then tend to favor members of the in-group and imbue positive characteristics onto them, whereas members of the out-group are viewed with suspicion and oftentimes are seen negatively.”

Rally goers protest vaccines and the current administration during the “World Wide Rally for Freedom”, an anti-mask and anti-vaccine rally, at the State House in Concord, New Hampshire, May 15, 2021. 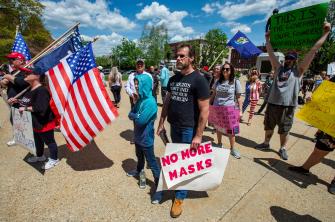 Rally goers protest vaccines and the current administration during the “World Wide Rally for Freedom”, an anti-mask and anti-vaccine rally, at the State House in Concord, New Hampshire, May 15, 2021. Photo by Joseph Prezioso / AFP via Getty Images

Following the herd, but not the immune kind

This mindset has profound social implications. While the U.S. has a goal to vaccinate 70 percent of American adults by July 4, public health officials are still concerned that another wave of COVID-19 will hit this summer due to millions of Americans refusing the jab.

While social psychology theories cannot explain all 22 percent of vaccine-hesitant individuals, the researchers are confident that they provide meaning for at least part of that population. People in this group often refuse to have their children vaccinated and also are more likely to express interest in “intuitive” thinking around health and medicine rather than accept empirical data offered by professionals.

“People who embrace folk theories about medicine — i.e., inter-generationally transmitted beliefs about medicine that are widely held, but factually inaccurate — have been shown to be more likely to think about the world in conspiratorial ways, and less knowledgeable about basic scientific facts.”

The power of tribalism

The team notes that this is more than a barrier to herd immunity. Individuals that score high on the AVSID scale are more likely to share misinformation about vaccines and disrupt important public health communications. The challenge of combating such trends, they note, is especially difficult when anti-vaxx identity is bound to the group.

Reaching the 14 percent of vaccine-hesitant individuals will prove easier than trying to convince the 8 percent of anti-vaxxers. As long as their identity is tied with the group, changing their minds will be nearly impossible.

Tags
COVID-19COVID-19 vaccinesCurrent Eventspsychologypublic healthPublic Health & Epidemiologysociologyvaccination
In this article
COVID-19COVID-19 vaccinesCurrent Eventspsychologypublic healthPublic Health & Epidemiologysociologyvaccination
Related
Health
What happens when regular porn watchers abstain for a week?
Researchers watched for signs of withdrawal — but didn’t find any.
Thinking
Why you should laugh at yourself, according to Seneca and Nietzsche
“It is more human to laugh at life than to lament it.”
Sponsored
4 misleading personal finance tips
Personal finance advice is often over-simplified and fails to consider economic research or people’s unique circumstances.
Strange Maps
Europe’s stunning digital divide, in one map
Some Europeans really don’t want to use the internet.
Thinking
Bonhoeffer’s “theory of stupidity”: We have more to fear from stupid people than evil ones
Evil is easy to identify and fight against; not so with stupidity.
Up Next
Neuropsych
How a rubber hand could treat OCD
A well-known psychology trick called the “rubber hand illusion” could be useful for treating patients with obsessive-compulsive disorder.