While vaccinations are administered to individuals, the benefit they provide extends beyond the recipient to the entire community in which they reside. They strengthen community immunity, or “herd immunity,” by making it harder for contagious diseases to spread through a group of people. When such illnesses encounter potential victims who’ve been vaccinated against them, they don’t get anywhere, and their progression is blocked.

If enough people remain unvaccinated, rapid contagion through the community is more likely to occur. According to the National Center for Biotechnology Information (NCBI), “vaccination rates of 96 to 99 percent are necessary to preserve herd immunity and prevent future outbreaks.”

We’re currently experiencing the worst outbreak of measles — a dangerous disease — since 1996 due to a decline in vaccination rates. A new online simulator from University of South Florida (USF) College of Public Health, in partnership with the Public Health Dynamics Laboratory at the University of Pittsburgh, shows how easily this can happen. 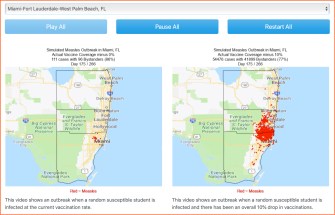 How the USF simulator works

The online simulator is called “FRED” for “Framework for Reconstructing Epidemiological Dynamics.” It utilizes actual Florida census data to create a visualization that models both actual current cases — each appears as a red dot — and the likely outcome if vaccination rates were to fall by 10 percent. While Florida-specific, these results could apply to any state, aside from local behavioral differences. It’s pretty stunning. 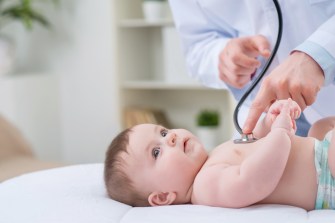 The CDC recommends children under 24 months in age be vaccinated against polio, measles, mumps, rubella, hepatitis B, and varicella (chicken pox). The most recently published information from the CDC finds that U.S. vaccination rates for these diseases was low enough in 2017 to be a problem for herd immunity:

There are a few factors leading to the break down of what’s been a highly effective worldwide vaccination effort that’s wiped out childhood smallpox and nearly eliminated malaria and polio.

The anti-vax movement, which has become increasingly widespread due largely to endorsements by misinformed celebrities, has grown around solidly disproven links between the MMR vaccine and autism. It’s behind the measles outbreak that’s emanating outward from anti-vax communities such as the ultra-Orthodox Jewish communities of Brooklyn and Rockland County, New York. As of this writing, there have been 839 nationwide cases confirmed by the CDC. Sixty-six of these were in Brooklyn and 41 in Rockland.

The CDC has also found that many parents are skipping vaccines for their children due to the medicine’s cost. Among lower-income groups, vaccinations have dropped precipitously for vaccines other than Hep B:

There’s also a geographic component. Children living outside metropolitan statistical areas (MSAs) are 2.6 to 6.9 percent less likely to be vaccinated.

Why Vaccines Don’t Cause Autism

Why vaccines don’t cause autism

Perhaps the most challenging issue is the anti-vaxxers, since they seem amazingly resistant to better, more accurate information about the safety of vaccines and the damage done to their communities by opting out of herd-immunity efforts.

The remaining factors are largely an issue of access to vaccinations, both in terms of local availability — such as public school-based programs implemented in the past — and cost. Vaccinations are an important area in which the current U.S. healthcare system is clearly falling short.

A group of prominent scientists shares how research has changed them.

Negative feedback ignites the primal (“fight or flight”) and emotional (“do they hate me?”) parts of our brain first.
Up Next
The Present

Congratulations to our Audience’s Choice and Judges’ Choice Award Winners!