Hannah Gadsby couldn’t understand why people kept telling her she might have autism. She believed the developmental disorder mostly applied to young boys. Then the Australian comedian was diagnosed with autism and ADHD four years ago, fitting a lot of pieces into the puzzle of her life, including her response to constant noise and motion while on stage and the feeling of being sober in a room full of drunk people (or vice-versa) all of the time.

The diagnosis came shortly after her comedy special, “Nanette,” was receiving critical praise around the planet. Growing up lesbian in a conservative Tasmanian community, “Nanette” is a powerful social commentary merging with raw storytelling. Her emotional roller coaster makes it difficult to distinguish tears from laughter or despair. That’s the point.

After considering quitting comedy, Gadsby returned with “Douglas.” As with “Nanette,” it’s difficult to label it comedy. Pure and simple, Gadsby is a masterful storyteller. While she touches upon a number of issues in her latest special—the pouch of Douglas, patriarchy, Renaissance art—grappling with autism and, specifically, anti-vaxxers, is the highlight.

Anti-vax rhetoric is thriving during this pandemic; its trajectory had already been rising. A Gallup poll from January found the number of American adults that believe vaccinating their children is “extremely or very important” dropped 10 percentage points from 2001. This is still a far cry from a suspect survey by an osteopathic group claiming 45 percent of adults are vaccine-hesitant. Still, the number is moving in the wrong direction.

How Hannah Gadsby’s High-Functioning Autism Works | Netflix Is A Jokewww.youtube.com

In a scathing yet hilarious indictment of the anti-vax movement, Gadsby says activists are highly organized and coordinated. They’re also prone to “willfully manipulate statistics,” as the osteopathic study proves. This doesn’t change the fact that anti-vaxxers are woefully outnumbered, however loud social media seems. Tragically, the loudest voice in the room gets taken seriously, sometimes.

After discussing her autism diagnosis, Gadsby begins the skit.

“Do you know what causes autism? No, you f***ing don’t. If you honestly think you do, your confidence is making you stupid.”

She’s aware anti-vaxxers are likely in the room. Her core demographic is wealthy, entitled white women, which is “a Venn diagram with a lot of crossover.” Gadsby holds no hope in changing minds, because that’s not how closed minds work: “They don’t work; they’re closed for business.”

She then pretends vaccines cause autism, although “pretending is not science.” She’s not upset about being on the spectrum. That doesn’t mean having autism is easy; quite the contrary. It’s difficult to always be the odd one out. That said, Gadsby brilliantly advocates for autism.

“As difficult as this life is, it’s nice to have a life. And it’s particularly nice to have this life in a world without polio. Polio is bad, and that is a fact, not a feeling.”

Text on a screen will never compare to Gadsby’s delivery: the crescendo of “polio,” the playful yet serious expression on her face when delivering this information. Her critique doesn’t stop there.

“I would rather have autism than be a sociopath like you.”

Tough statement, which she qualifies. Believing your child is more important than all other children means you’re not playing for the team. You’ve wrapped yourself up so tightly in a belief system that self-righteousness has become your creed. Far from being a posture on Twitter, this mindset has real-world consequences.

First, there’s the economic angle. Discredited physician Andrew Wakefield, who was paid to falsify data in his infamous measles vaccine-autism study, filed a patent for a single-jab measles vaccine as the same time he was decrying vaccines. His objective appears to have been financial from day one. 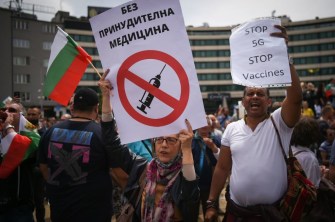 Protesters hold banners against the 5G technology and vaccines as others shout slogans during an anti-government protest in front of the parliament in Sofia on May 14, 2020.Photo by Nikolay Doychinov/AFP via Getty Images

Wakefield isn’t the only opportunist. Osteopath Joseph Mercola’s net worth has grown to over $100 million as he promotes his products to anti-vaxxers. Then there’s Judy Mikovits, the subject of the discredited film, “Plandemic,” whose book became a bestseller after the film’s release. Her book was published by a house whose sole focus is promoting anti-vaccination rhetoric.

Recently anti-vax rhetoric has rooted in Samoa. The result: over 4,000 children were infected with measles last fall. At least 70 died. An anti-vax advocate promoted the use of papaya leaf for treating measles; he was later arrested. The situation was so bad, the Samoan government declared a state of emergency and banned children under the age of 17 from gathering publicly.

Anti-vax rhetoric also hit Orthodox Jewish communities hard last year. In March, 2019 over 275 cases of measles were confirmed in New York state. The funding for this effort was provided by a wealthy Manhattan couple that has donated over $3 million to anti-vax organizations. One group is Informed Consent Action Network, an anti-vax organization run by a former television producer that specifically targets Orthodox Jewish communities in Brooklyn and Rockland County.

“Douglas” is a masterful piece of common sense propaganda. Gadsby is ready for the vitriol certain to come her way for exposing the public to basic science. She snacks on hate. Following that statement, she stares out into the crowd to ask if they understand why she would eat the bluster of haters. Her response is priceless.

“It builds immunity; it’s called microdosing. Your hate is my vaccine.”

“What are you going to do? I already have autism.”

Tags
autismbiologyentertainmenthealth carepublic healthVaccines
In this article
autismbiologyentertainmenthealth carepublic healthVaccines
Related
Thinking
Lobsters don’t die from old age — they die from exhaustion
Being mortal makes life so much sweeter.
Health
Food expiration dates don’t have much science behind them
A food safety researcher explains another way to know what’s too old to eat.
The Present
Five key findings from the 2022 UN Population Prospects
Explore the key highlights from the UN’s latest release of its world population estimates.
Health
Sepsis still kills 1 in 5 people worldwide
Two ICU physicians offer a new approach to stopping it.
The Learning Curve
What is technology addiction? (And how you can better manage it)
To reap the benefits of digital technologies, we must contend with their addictive designs.
Up Next
The Present
Furloughed due to COVID-19? Become a contact tracer.
State and local governments are hiring contact tracers to contain the spread of novel coronavirus.