While bedside manner is important, the ruse is immediately apparent. Another way of phrasing an anti-vaxx agenda is to claim, “I’m just asking questions,” wherein the questions answer themselves. The video in question tries to connect vaccines with “Nanobots, GMO’s [sic], trans humans [sic]” and “Covid-19 [sic].”

The monologue is an incoherent rambling of numerous buzzwords from different disciplines united by one goal: to make you believe a giant conspiracy is happening right in front of us that only the woke can see.

That I received the video on Facebook isn’t surprising. As Media Matters points out, the social media giant has become Ground Zero for the anti-vax movement. Despite the company’s stated intentions to combat anti-vax disinformation, that doesn’t seem to be changing.

“Facebook pages for NVIC, CHD, ICAN and their associated leaders and media projects have a combined more than 950,000 followers. This represents the tip of the iceberg; according to a recent report, anti-vaxxers have a combined Facebook following of 58 million people.”

Facebook’s recent fact-checking efforts appear to be doing more trouble than good. A friend recently posted an NPR article discussing the dangers of conspiracy theories. Since CTs (conspiracy theories) were mentioned, Facebook’s AI tagged the article with a warning. This sort of misstep causes consumers to question the validity of the fact-checking process, which only fuels the anti-vax movement.

This longstanding problem transcends social media. One 2010 study found that spending 5-10 minutes on an anti-vax website is likely to sway your opinion on vaccines—there are two sides to the story—while the opposite does not occur. Anti-vaxxers dig their heels in when confronted with opposing information.

This trend is having real-world consequences. Only half of Americans are willing to get a coronavirus vaccine, with a quarter wavering and a quarter against. While we should be confident of efficacy—gossip about a vaccine arriving in the Fall is ambitious and potentially unsafe—the idea that a quarter of the country will refuse any vaccine is a potential public health disaster (as if we’re not experiencing one now).

Making matters worse, we can’t fight disinformation with data. No matter how many articles debunk Plandemic, Mikki Willis gains momentum. Do 27,000 doctors really support his efforts to “reform our corrupt global healthcare systems?” There’s no way to tell, but that’s the thing about Facebook: it doesn’t have to be true. Willis’s claim, which he made in conjunction with a fundraising effort for the film, has been shared 4.4k times. Convincing his fanbase that perhaps tens of thousands of doctors aren’t on board will be a Herculean task.

“The first three installments of the ‘special report’ adopt right-wing themes unrelated to vaccines, such as the claim that public health orders that promote social distancing result in a ‘loss of civil liberties’ and subject Americans to ‘quarantine shaming.’ The fourth installment, published on March 29, includes the first attacks on vaccine development in the series … The fifth installment of the ‘special report,’ published on April 1, frames the vaccine development efforts of pharmaceutical companies and other entities as a cash grab.” 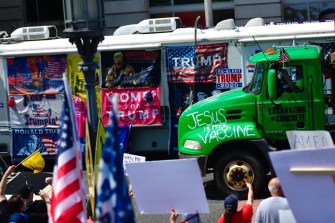 A truck with writing “JESUS IS MY VACCINE” drives by demonstrators rallying outside the Pennsylvania Capitol Building to protest the continued closure of businesses due to the coronavirus pandemic on May 15, 2020 in Harrisburg, Pennsylvania. Photo by Mark Makela/Getty Images

The irony is that NVIC’s Facebook page is listed as an “Educational Research Center.” Just today the organization posted about the long-disproven link between the measles vaccine and autism (via Robert F. Kennedy’s anti-vax organization, Children’s Health Defense), opportunist Joseph Mercola‘s questioning whether the COVID-19 surge in Texas has anything to do with the novel coronavirus, and conspiracy theory-rich GreenMedInfo, whose founder traffics in ridiculous ideas, such as germ theory being false.

And so here we are: instead of reporting on pressing global issues, Reuters has to fact check whether the metal strip in face masks is really a 5G antenna or if Wayfair is involved in human trafficking. (The woman that posted the “medical doctor” video above is convinced Amazon is involved as well.) No matter how ridiculous these sound—and they should, to any functioning adult—common sense is losing ground: an analysis of over 1,300 Facebook pages with 100 million followers shows that anti-vax agendas are becoming more influential.

When the printing press was first invented, anyone could hire a printer. The idea of objective news took some time to work out, and it is questionable that it ever did get worked out. But we’re in a truly disturbing place when one of the most effective therapeutics ever discovered—the millennia-old idea of allowing the body to build up immunity by introducing a small dose of an offending agent—is being used as, what? A political tool? An ideological battering ram? An apocalyptic battle song sung by the woke as they laugh at all the silly sheeple?

It’s impossible to tell what the end game is. Being contrarian is now its own currency. Whether or not your agenda accomplishes anything is secondary to just being on the team—a participation trophy for simply showing up. Putting in the intellectual and emotional effort demanded by the complex and nuanced realm of science is proving too much for America to tolerate. When a nation descends into such intolerance, anything becomes possible.

Both journalists have put themselves in danger to shed light on corruption and abuses of power in their home countries.
Up Next
Health