The first chiropractic adjustment took place in 1896 in an Iowa office building. D.D. Palmer, a fan of magnetic healing and anti-vaxxer, ran into the building’s janitor, who was suffering from back pain; he was also deaf. It’s not quite clear exactly how Palmer adjusted the janitor’s vertebral subluxation—a term unique to chiropractic that implies an undetectable spinal misalignment—as, with all origin stories, details are murky. Supposedly, Palmer claims the adjustment cured him of deafness; the second patient he treated apparently left with no more heart disease.

Palmer was a metaphysics fan and correlated physical symptoms with spiritual phenomena; chiropractic is based on the idea that energy flows block the “innate,” which manifests in things like back pain. Not only did he believe chiropractic had a religious and moral purpose, he also claimed he “received” it from a deceased physician. He called chiropractic a religion; he even tried to use the freedom of religion clause to circumvent the fact that he wasn’t a licensed medical professional, a move that got him jailed and fined. He ended up selling his school to his son, who apparently killed him in 1913.

While Palmer’s emphasis on the nervous system was an early contribution to an important physiological discourse that doctors are still uncovering today, chiropractic is still considered pseudoscience. Regardless, this is America, where suspect folk remedies and metaphysical interventions are commonplace. Within three decades there would be over 80 chiropractic schools established in the United States. Today, there are over 70,000 certified chiropractors in this country.

I’ve seen chiropractors hundreds of times. When I had trouble getting out of bed in high school—a case of sciatica following a femur break—it seemed to be the only thing that had me walking without pain. I revisited a number of chiropractors over the decades for various reasons, including neck pain and a broken collarbone. Eventually a pattern emerged that caused me to stop going: pain relief offered by chiropractic never led to addressing the actual issue.

For example, going to a chiropractor 2-3 times a week for years alleviated my sciatica but never fully stopped it. That only happened when I began practicing yoga. Time and again, chiropractors provided temporary relief without ever pointing to the cause of the pain. Every time I found actual relief through a new exercise modality or physical therapy.

Are chiropractors worth it?

Are chiropractors worth it?

I recalled my chiropractic history after reading science journalist Kavin Senapathy’s recent essay on infant adjustments. She writes about the small yet disturbing contingent of chiropractors that treat “birth trauma,” a number that the International Chiropractic Pediatric Association pegs at 90 percent, but which is actually less than 3 percent. As with many forms of complementary or alternative medicine, positive studies usually appear in journals dedicated to the modality (see: acupuncture; see: homeopathy).

Senapathy opens her article with the case of an Australian chiropractor adjusting a two-week-old newborn. This includes hanging the baby upside-down by the ankles and “activating” his spine by pulsing his tailbone and neck. Given the fact that during a newborn’s first month of existence every movement is a reflex action, how a spinal adjustment would do anything positive for the child remains a mystery. It also points to a deeper cultural issue.

This phenomenon of a baby needing an adjustment to treat trauma is really a reflection of the emotional temperament of our time, especially, it appears, in relatively affluent Western nations. “Trauma” has broadly become a signal to discuss personal issues. There is certainly plenty of actual trauma, as victims of rape and sexual harassment and soldiers returning from war know too well. Yet trauma has also become a buzzword that people apply to minor disturbances and grievances, which sadly takes the focus away from those who need it most.

Birth trauma is also real, yet the coddling of the child is its own modern issue. I refer to it as the playground problem. In the early eighties, all of the jungle gyms I played at had some form of dangerous obstacle: rusty pipes, nails, shoddy wood, questionable bridges, slides baking in the midday sun. No parent wanted their child to get hurt, but as a brave and dumb boy part of learning meant discovering my boundaries. Sometimes a scrape or bruise teaches lessons.

Today, jungle gyms are constructed of curved plastic with soft mats or sand at the bottom. We’ve removed the boundaries so that children no longer have an opportunity to discover them. There might be fewer injuries, but there’s also less education. Falling onto something soft during play does not prepare anyone for life, and play is an essential skill throughout the animal kingdom for learning boundaries. 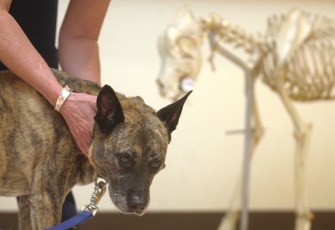 Tufts University School of Veterinary Medicine – Zephyr the dog gets a chiropractic assessment from Dr. Judith Shoemaker while the skeleton of a dog stands in the background on the classroom sidelines.

Education is essential, because the lessons you don’t learn become their own limitations, only these prohibit growth. That’s how the proliferation of pseudoscience began. There’s little coincidence that two of our most important medical advancements—germ theory and vaccinations—greatly aided the explosion in human population. Millions of years of evolution led to one billion humans only in 1804; in just over 200 years, we’re well beyond seven billion thanks to those two discoveries. Though life remains tenuous and prone to tragedy, we’re better off now than ever before, which has led to the neurosis known as pseudoscience.

Enter “alternative” healing, a conglomeration of industries worth many tens of billions of dollars, many of which address the “innate trauma” we experience while basically just living. Chiropractic, admittedly on the tamer side of this industry, is like taking an aspirin. It treats symptoms and only treats causes by coincidence. There’s also a good chance that what’s actually aiding your muscles is the electro-stimulation and massage (if offered) more than spinal manipulation. And if your chiropractor is also offering vitamin infusions, you can be certain the business is a sham.

As with every modality, medicine that works should be investigated. Sadly, a lot of chiropractic studies show no benefit greater than placebo or painkillers. The best chiropractors I’ve seen offered massage before an adjustment, which makes sense: loosen the muscles pulling on the spine before adjusting the spine. But if you don’t teach your patients how to strengthen those muscles on their own, they’re only going to keep getting tight or weak, which is good for repeat business but terrible for healing.

Our bodies are the result of our individual movement patterns. As movement expert Katy Bowman says, no one is out of shape; we’re all in the exact shape that we train for. If you don’t train, that’s the shape you’re in. Manipulating vertebrae is a useless practice without addressing the entire muscular structure of a human body and how that body moves on a regular basis.

Which is not to say that chiropractic is without value. As mentioned, it has helped me. It just never cured me. As Senapathy writes, the real problem, especially when dealing with infants, is that it could stop you from finding a professional that can heal you.

“While it’s reassuring to know that chiropractors are extremely unlikely to break an infant’s neck or otherwise cause physical injury, the concern is that parents who take their children to a chiropractor will do so in place of seeing a traditional primary care physician, which could delay the diagnosis and treatment of potentially serious conditions.”

That’s a risk we should all consider before deciding which medical professional to visit next.

Tags
emotionshealthhealth carehuman bodymedicinephysiologyscience
In this article
emotionshealthhealth carehuman bodymedicinephysiologyscience
Related
Health
How saliva changes the flavor of food
“It’s a liquid, but it’s not just a liquid.”
Neuropsych
Asthma drug brings back “lost” memories
In a study involving mice, scientists used two different techniques — one optogenetic and one pharmacologic — to recover “lost” memories.
Life
Our antidepressant drugs are affecting animals and ecosystems
A toxicologist explains the impacts of antidepressants on fish — and no, they’re not getting any happier.
Health
New blood types are often discovered following medical disasters
New blood types are regularly discovered by an unusual absence or an unusual presence — both of which can result in tragedy.
Neuropsych
How you breathe affects your brain
Your breathing rhythm influences a wide range of behaviors, cognition, and emotion.
Up Next
Technology & Innovation
What Netflix’s “Great Hack” tells us about the future of our data
The world promised by the internet and social media is one where physical barriers are a thing of the past and communication is instantaneous. The current reality has some of […]