What If We Got Exercise All Wrong? 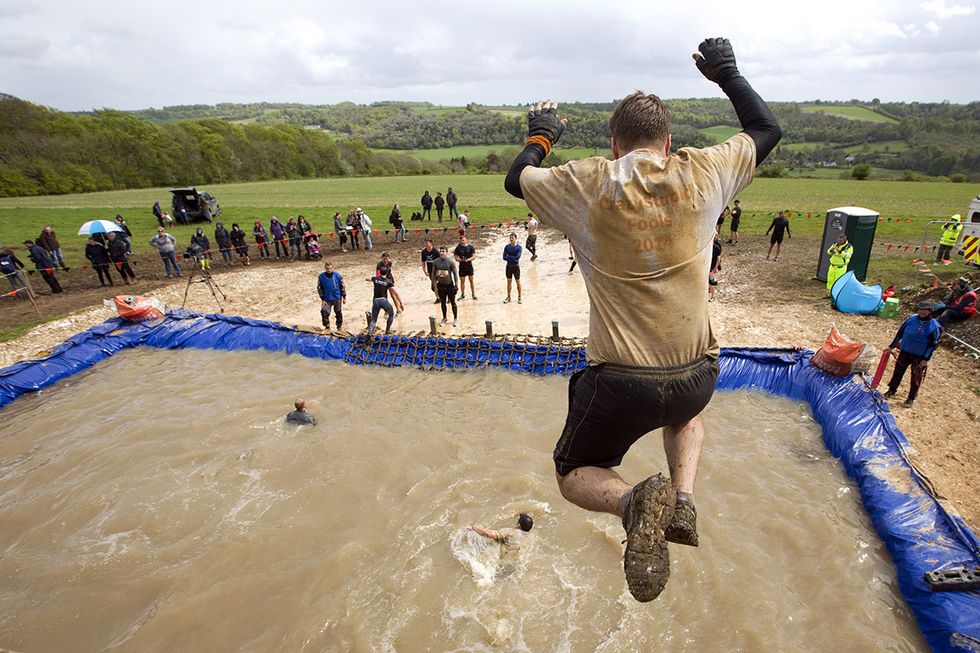 Participant jumps from a four meter high platform into water during the Tough Mudder endurance race in Henley on Thames, West of London, on April 26, 2014. The course is set out over 10-12 miles (18-20 km) with 20 obstacles. (Photo: Justin Tallis/AFP/Gett

It started with a chair. Biomechanist Katy Bowman asked followers of her Nutritious Movement Facebook page what would happen if someone suddenly removed the back of your seat. The most common answer: I’d fall backwards.

Exactly. The outsourcing of postural muscles, designed to hold our bodies upright in a variety of positions, would for many be so weak and untrained that the entire structure would collapse. Sitting tall takes work, the type of work too many humans are unequipped to handle. We recognize good posture, so prevalent and acceptable has trademark slouching become.

Another light bulb went on while at her laptop, an unexpected epiphany. Where did that chair come from? Which workers delivered it to their house? Were they the same workers that stocked the warehouse? What about the workers that built the chair, those who sourced the materials? A lot of movement happened to honor sedentary sitting.

This is one of the main ideas in Bowman’s latest book, Movement Matters: Essays on Movement Science, Movement Ecology, and the Nature of Movement. Regarding the chain of movement that led to the chair, she recently told me,

You’ve outsourced the work it takes to hold you in place to an inanimate object. That was work that, were that object not there, you would have had to have done for yourself.

This phenomenon extends beyond furniture. What we eat, how we connect, what we wear, how we travel—all sources of movement that we have removed ourselves from. Our economic system relies on movement, yet profoundly unequal contributions make for a skewed relationship to the environment.

Our cultural relationship to movement is backwards: we champion (and financially reward) sedentary occupations at banks and think tanks while scowling at physical labor. The basic message is that if you have to use your body to earn your daily bread, you’re not worth much bread.

Yet we have a biological requirement for movement that’s starving due to these sedentary positions. The movements of the labor class are sadly frowned upon. In fact, as much as anti-immigration policies make headlines, a few years ago the state of North Carolina needed 6,500 farm workers. A call to Americans for help yielded a total of seven. Fellow citizens were unable to handle movements needed for picking and sorting. As Bowman says,

The things that you depend on every day come from raw materials that are found by people squatting and crawling and digging. It’s one group of people’s perspective that these are archaic movements.

Bowman doesn’t believe our fitness solution helps. Like the false notion that you can burn off holiday calories with an influx of cardio, it’s impossible to undo ten hours falling backwards onto a chair by rushing to the gym. She compares this trend to the minerals, herbs, and supplements that are the cash cow of many grocers:

We don’t move at all for anything we need, then we walk into a gym and see all of these movement supplements that we can take. But they don’t really produce anything. They are simply producing within us good health, which is fine for us, but there’s a lot of other people around the world doing those movements on our behalf. If we can convert some of the extra time we spend on exercise that benefits only us and maybe start using that movement to accomplish something more than just the movement, you would be extracting more nutrition, if you will, from your bout of movement.

Coders partake in Spartan Races to chase after a physical reality that should be more gently and regularly woven into the fabric of daily life. Yet as technology advances we become enthralled with the prospect of uploading consciousness into the cloud. Like Gilgamesh seeking everlasting life, the fallacy is that consciousness is extractable from biology.

At least the King of Uruk planned to dominate his domain in his half-divine body. Only a sedentary culture could produce fantasies of disembodied ideas floating through the ether. Like early ascetics that viewed the body as a disposable meat wagon, futurists down gallons of Soylent in hopes of transcending the bloody reality of chemistry.

Alas, animals we are. As Thomas Friedman recently stated, earth does not care for our desires; it relies on physics, biology, and chemistry, not hopes, dreams, and prayers. Humans evolved over millions of years thanks to movement. An emphasis on sedentarism in the wake of the Industrial Revolution has resulted in an entire industry of mismatch diseases. Humans have not defeated the elements, as we often believe. We have surrendered.

Thus we treat exercise as medicine for poor habits. We construct chairs for weak spines and bulging middles, we drive a few blocks instead of walking—and since we barely walk, we pad our feet in sneakers that produce anatomical nightmares up the posterior chain to our neck—and then we hope four or five hours a week on a treadmill will even the playing field.

In Movement Matters Bowman offers numerous tips for rethinking your relationship to how and why you move. Just as we would not need anti-inflammatory drugs, statins, and surgeries if not for poor diets, our bodies would dramatically change if we moved more naturally and put that movement to constructive use. Our relationship to our bodies would change, as would how we understand and treat nature.

Movement should be something that you’re doing all of the time for yourself. That is the natural relationship of a human to movement. It’s like saying that breakfast is medicine for starvation. It’s not medicine; it’s just food. You’re supposed to be eating; it’s a biological requirement. The same holds true for movement.