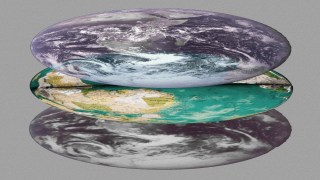 Can this end flat-Earth theory once and for all?
▸
10 min
—
with
Big Think

BILL NYE: Is the earth flat or round? It's round, okay. Now, let's see. How do we go about proving that?

MICHELLE THALLER: That's a hard thing for me to even start talking about because there are so many proofs that the earth is round it's difficult to know where to start.

NEIL DEGRASSE TYSON: B.o.B., the rapper, I have a video letter to him the transcript of which is in "Letters From An Astrophysicist." That rose to that level of attention because he started saying 'I'm using laws of math and physics to show Earth is flat.' Those are fighting words. You're going to say using math and physics? That is an alarm to the Geekoverse that we must rise up and counteract these forces from the dark side that are out there.

THALLER: There are proofs all around you. It is not difficult to know that the earth is round. So let's start from the simple to the slightly more complicated. One of the things you can see yourself with a pair of binoculars is if you actually go out to a lake and there are boats on that lake the farther away a boat is, the more the bottom of the boat will disappear and you'll basically just see the mast of the boat. And as a boat goes farther and farther away, the last thing you will see is the very top of the mast of that boat, and that's because the boat is actually going over the horizon that's curved. And that means that as it goes farther and farther away you see less and less of the bottom of it and more of the top of that. You can see that with binoculars by an ocean, by a lake. It's really easy. That wouldn't happen if the earth were flat. You would simply see the boat getting smaller and smaller and smaller as it went farther away, but you'd be able to see the whole thing with the same proportions.

NYE: Go to the seashore. Go to a seashore and figure out if you live on the East Coast figure out why you can't see Spain from the East Coast of North America. Just go to the middle of the Mississippi River and look south. Why can't you see Louisiana. Why can't you see New Orleans. What's the problem there? Or the climb a tower or go to the top of a hill or a mountain and you'll see a little farther, but you will not see to the other side of the earth, places we know to exist. For example, I've been to London. I can tell you other people have. I've been to Vancouver, British Columbia and you cannot see Vancouver, British Columbia from Boise, Idaho let alone from New York City or Toronto or what have you.

THALLER: Then there's some other proofs that are a little more obscure but they're actually really lovely and one is to observe What happens during a lunar eclipse. Now a lunar eclipse happens when the earth casts a shadow on the moon. The moon actually goes dark. In fact if you've seen one you could actually see the earth's shadow go across the moon. And when the moon is entirely in the earth's shadow the moon looks like of dark and even kind of red colored. It's really, really beautiful. What's happening in that case is that the sun is on one side of the earth. The earth is in the middle and it's casting a shadow. The earth is casting a shadow on the moon. And as the shadow moves across the moon you'll notice that the shadow is curved, it's round. So something like the Sun that's bigger than the earth and is able to cast a shadow of the earth on the moon can actually show you the shape of the earth. Aha, you might say, but could the earth be a disk? Could it be flat but it's actually still shaped like a disc, not like a sphere. There was a Greek scientist called Aristarchus and what he noticed was that you can get a lunar eclipse at many different angles where the sun is. Sometimes the shadow goes straight across the moon. Sometimes it just kind of glances the moon just a little bit is in shadow just on the top or on the bottom. From every different vantage point, every different angle that the sun is casting a shadow you always get a perfectly curved shadow. The only shape that can cast a shadow that's curved from any direction you put the light is a sphere. So people have known that the earth is spherical for thousands of years.

NYE: Look at pictures from space where you see the earth as a sphere. Those pictures are not faked and I'll tell you just if nothing else here's why you can tell they're not faked. Just to create the paperwork that NASA had created, NASA in this one case. Just the paperwork to send anything out in space. To send people into orbit or to send them to the moon, that amount of paperwork would make faking it prohibitively expensive. No one could afford to generate that much documentation. Then the other thing if you want to get into this, if your friends are really serious, have them get on a boat or a ship and go out at sea and you'll notice you can't see infinitely far. Furthermore if you get into it enough pick up a book about navigation or go online and learn about navigation. A very, very important thing you have to take into account when you try to navigate the ocean from a ship or a boat is how high you are off the sea surface. The higher you are off the sea surface, the farther you can see, the farther away the horizon is.

THALLER: I actually said this to somebody and I couldn't believe they'd never thought of it, but with binoculars you can see planets. You can see Saturn and Jupiter. You can see Mars with a telescope. The sun, the moon, everything else you see in the solar system is a sphere. So we're the one thing that is different? And that actually made somebody who was more interested in actually hearing information, that got them to think like you're right. Everything else we take a picture of is a sphere.

NYE: And you guys, come on. Everybody watches newscasts. You all use mobile phones. You all see airplanes fly around. You all go to see Ed Sheeran in concert one day in London, another day in Melbourne, Australia. This all depends on our fundamental understanding of the size of the earth and its shape with extraordinary precision. And if you want to get into it the earth isn't quite a sphere. It's a little wuhh. Its spin is a little wuhh, stretched it, made it slightly oblate as the saying goes.

THALLER: And it's not okay to think that the earth is flat. This is not a viable argument. I have friends who have been on the international space station. They have orbited the earth once every 90 minutes. I have had personal experience with people that have been up in space and can see with their own eyes that the earth is round. And, of course, we've taken all these amazing pictures from space. They're so beautiful all those pictures of the earth. So I don't really know what's going on right now with this earth is flat thing.

TYSON: In a debate what is the construct? It's typically two people and there's an audience and you debate some opposite sides of some issue and then there's a winner of the debate. And everyone walks away reflecting on the winner. So who wins a debate? It's often the person who's charismatic, who may be charming that's related to charisma of course. Who had a good way with words, good vocabulary. And you can have someone who doesn't have any of that who is speaking objective truths who could lose a debate. So then what is the point of the debate if one of these points of view is objectively true? I will not enter a debate where I have the objectively true side of an argument and the other person does not. That is something that should not be debated, does not belong in front of an audience getting debated. You want to debate something? Debate political policy of what to do in the face of climate change. Do you have carbon tax? Do you have solar panels? Do you subsidize them? Debate that. Don't debate something that is or is not objectively true in this world.

NYE: This is all susceptible to analysis, but spend some time learning about navigation, tell your friends to spend some time learning about navigation. Ahh. Navigation has changed the world by the way. What are you wearing? You're wearing stuff that came from another part of the world on a ship. It didn't get here by magic. It got here through science.

TYSON: I think it's important to combat people who are claiming that they are using math, science, evidence and physics behind their cause when, in fact, they either aren't or they're using it badly. That needs to be called out. Otherwise, if you just have a belief system I don't really care. We live in a country that protects free speech which usually also means free thought. You want to think Earth is flat, go right ahead. But if you start influencing other people who have power over other people and you have no foundation in objective reality it can be dangerous. If you influence people or you yourself become someone who has influence over legislation, laws, rules by which we all abide in society, that's an unhealthy situation for civilization to be in. If your personal belief system which does not have correspondence in objective reality starts becoming predominant in the thoughts and hearts and minds of civilization.

THALLER: It's not okay to say that the earth is flat. This is some sort of strange denial. I don't know where it comes from and it's something where I keep getting this question. We really need to put this question to bed because we've known the earth is a sphere for a long time.