A new AI-based tool developed by Japanese astronomers promises to remove unwanted noise in data to generate a cleaner view of the true shape of galaxies. The scientists successfully tried this approach on real data from Japan’s Subaru Telescope and discovered that the distribution of mass produced by their technique corresponded to the established models.

The scientists from the National Astronomical Observatory of Japan (NAOJ) in Tokyo believe their method could be very useful in the analysis of big data from large astronomy surveys. These surveys help us study the structure of the universe by focusing on gravitational lensing patterns.

The trouble with gravitational lensing

Gravitational lensing refers to the phenomenon whereby massive space objects like a cluster of galaxies can distort or bend the light that comes from objects in their background. In other words, images of distant space bodies can be made to look strange by the gravitational pull of objects in the foreground.

One example of this is the “Eye of Horus” galaxy system, discovered by NAOJ astronomers in 2016. The striking images of the system, named in honor of the sacred eye of an ancient Egyptian sky god, are the byproduct of two distant galaxies being lensed by a closer galaxy.

The issue with gravitational lensing for astronomers is that it can make it hard to differentiate galaxy images that are distorted by gravity from galaxies that are actually distorted. This so-called “shape noise” undermines confidence in research into the universe’s large structures. 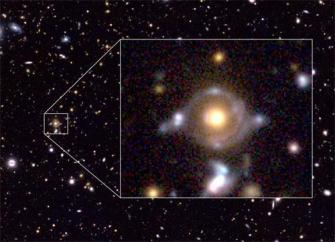 Eye of Horus galaxy system. The yellow object at the center represents a galaxy about 7 billion light-years away that bends the light from two galaxies in the background that are even farther away.Credit: NAOJ

The new study, published in theMonthly Notices of the Royal Astronomical Society, shows how the research team was able to counteract shape noise by utilizing ATERUI II, the most powerful astronomy supercomputer in the world. By feeding it pretend and real data from the Subaru Telescope, the scientists had the computer simulate 25,000 mock galaxy catalogs. They added realistic noise to these data sets while teaching their artificial intelligence network through deep learning to pick out the correct data from the noise.

“This research shows the benefits of combining different types of research: observations, simulations, and AI data analysis,” shared team’s leader Masato Shirasaki. He added, “In this era of big data, we need to step across traditional boundaries between specialties and use all available tools to understand the data. If we can do this, it will open new fields in astronomy and other sciences.”

How the AI works

Employing a generative adversarial network (GAN), the Japanese astronomers’ AI learned to find details that previously could not be seen, explained the observatory’s press release. The GAN developed by the scientists actually uses two networks — one of them generates an image of a lens map without noise, while the other one compares it to the real noise-free lens map, tagging the created images as a fake. By running this system through a large number of noise and denoised map pairs, both of the networks are trained. The first one makes lens maps that are closer to the real ones, while the other network does a better job of identifying fakes. 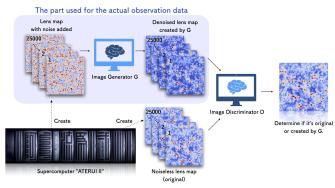 The diagram of the AI (generative adversarial network) utilized in the study. Credit: NAOJ

To further test their method, the scientists turned their AI’s attention to real data from 21 square degrees of the sky, showing that the distribution of foreground mass is in accordance with what is predicted by the standard cosmological model.

We’ll never be able to extract any information about what’s inside a black hole’s event horizon. Here’s why a singularity is inevitable.
Up Next
Life

One man studied apes for 50 years. He says nature isn’t as cruel as you think.