Astronomers found evidence for a new type of supernova, confirming a theory from over 40 years ago. The discovery expands our knowledge of the life cycle of stars and may explain the formation of the famous Crab Nebula.

A primer on supernovae

Supernovae are gigantic, extremely bright explosions that take place when stars die. Previously, two types of supernovae have been confirmed to exist: A thermonuclear (type Ia) supernova describes the explosion of a white dwarf star (the remains of a star less than eight times the mass of the sun) in an uncontrolled fusion reaction. A core collapse (type II) supernova happens when a star with more than 10 times the mass of the sun burns up all its fuel and its core collapses into a black hole or a neutron star.

The supernova whose existence astronomers likely proved would be called an electron capture (type III) supernova, a phenomenon that pertains to the explosion of stars between eight and 10 times the sun’s mass. In this type of supernova, as the star’s core runs out of fuel, gravity would force the core’s electrons into their atomic nuclei, causing the core to collapse in on itself.

The international team of researchers behind the new study, which was published in Nature Astronomy, followed up on an idea first proposed in 1980 by Ken’ichi Nomoto of the University of Tokyo.

The new type of supernova was identified based on analysis of supernova 2018zd, first spotted in March 2018. This supernova, about 31 million light-years from Earth in the galaxy NGC2146, was detected three hours after the explosion happened. Astronomers were able to compare images from before the explosion taken by the Hubble Space Telescope and Spitzer Space Telescope to images and data obtained after the supernova, including data from the 10-meter telescope at the W.M. Keck Observatory in Hawaii.

As explained in the press release from UC Davis, the SN 2018zd blast exhibited all six indicators of an electron capture supernova: (1) Its progenitor was a Super-Asymptotic Giant Branch (Super-AGB) star; (2) the progenitor lost most of its mass prior to the explosion; (3) the stellar data showed an unusual chemical spectrum expected of this type of supernova; (4) the actual explosion was relatively weak; (5) the supernova’s light behaved like theory predicted; and (6) there was little radioactivity.

“We started by asking ‘what’s this weirdo?’ Then we examined every aspect of SN 2018zd and realized that all of them can be explained in the electron-capture scenario,” lead author Daichi Hiramatsu said. 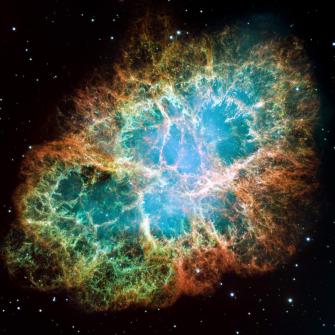 While the scientists were excited to find such a perfect match for an electron capture supernova, the discovery also sheds light on a nearly thousand-year-old mystery. Chinese and Japanese records from 1054 AD talk of a bright light in the sky that was visible even during the daytime for 23 days. At night, the light could be seen for almost two years.

The new study’s result provides greater confidence that this ancient event was, in fact, an electron capture supernova. Its remnants became the Crab Nebula.

Ken’ichi Nomoto, who is also credited as the author of the paper, commented that he was “very pleased that the electron capture supernova was finally discovered, which my colleagues and I predicted to exist and have a connection to the Crab Nebula 40 years ago.” He added that “this is a wonderful case of the combination of observations and theory.”

LIGO can detect the inspirals and mergers of the lowest-mass black holes, but not the biggest ones. Here’s how pulsars can help.
Hard Science

Humans won’t survive if we stay on Earth. Michio Kaku explains.
▸
7 min
—
with
Michio Kaku
Up Next
The Past

Discovering fossilized insects is difficult, but a new find suggests a unique place to look.