Big Think may not be well known for our football coverage —yet! — but we have some rare science / football crossover news.

While the Patriots battle the Eagles in Minneapolis during Super Bowl 52 (February 4th, 2018, starting at 6:30 p.m. ET on NBC) a quite large asteroid with the official name of ‘2002 AJ129′ is set to whiz by Earth, missing us by a scant 2.6 million miles. To put things into perspective, Mars, which is relatively close to us in the solar system, is about 34 million miles away. So AJ129 is flying practically “tight parallel parking” distance in terms of interstellar distances.

Yet that is still several thousand times the width of Earth, so we aren’t even close to getting hit. So, despite some alarming press coverage, NASA tweeted out to a concerned citizen (in Spanish) telling them that any cries of armageddon are “a lie.”

AJ129 is thought to be about 0.745645 miles wide (just under 3/4’s of a mile) and has an elliptical orbit, meaning that it roughly intersects with Earth’s orbit about once every 16 years. It’s quite an enterprising little guy and even has its own Wikipedia page!

You can see for yourself just how close AJ129 is coming to us by checking out the white oval here compared to Earth’s orbit in blue: 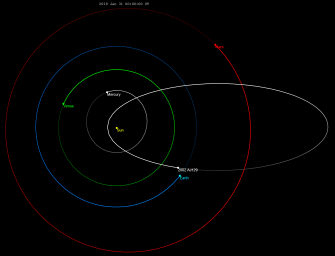 Even with six months’ notice, we can’t stop an incoming asteroid.
Hard Science

A study looks at how to use nuclear detonations to prevent asteroids from hitting Earth.
Hard Science

The impact might have triggered the Ice Age.
Hard Science

You think you’ve had a day where everything that went wrong could? T-Rex has you beat.
Up Next
Surprising Science