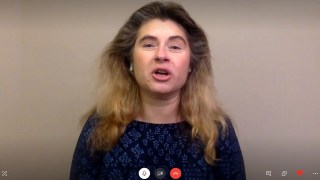 MICHELLE THALLER: I'm an astrophysicist and one of the things that I have been really impressed with with the International Space Station, some of the most amazing and innovating and strange experiments today are actually located on the space station. It's, of course, a wonderful platform to look at a lot of stuff because you're up above the atmosphere, you're up in space and you can both look out into space and you can also look back down at our home planet the Earth.

One of the things that makes it a challenge to actually use it as, for example, an observatory with telescopes is that the space station swings around a lot so you have to be able to actually stabilize the image and what you're looking at, especially if you're working on the space station. But to me certainly one of the most amazing discoveries of the last year has come out of the space station experiment called NICER, that's the acronym. It stands for the Neutron star Interior Composition Explorer so NICER. And NICER it's actually a camera that looks at x-ray light. So, this is very, very high energy light and luckily for us this light does not get through the atmosphere. There are x-rays coming from space all the time and they would be very harmful to us but they're absorbed by the air in the Earth's atmosphere. Of course that means if you want to study x-rays coming from space you need to get up above the atmosphere and the space station is. Now, NICER was specifically designed to look at a very interesting type of dead star called a neutron star. And a neutron star is the remnants when a very massive star, a star that might have been 10, 20, 50 times the mass of the sun violently dies and explodes. And incredibly the core of the star is usually still intact after that because the core became so compressed in that explosion that it holds together as a giant ball of atoms basically. Neutron stars are only about ten miles across. They have the density of one big atomic nucleus and that means that if you had a teaspoon full of this material, this neutronium, that teaspoonful would have about as much mass as Mount Everest. So, a ten mile ball every little bit of it is that dense and not only that these things spin hundreds of times a second. They are wonderful. They are real monsters. The gravity around them is so intense, it's not a black hole but it's sort of natures next best thing. The gravity is so intense that light is actually bent around these objects. And one of the most amazing things that we did with NICER recently is we used data coming in from x-rays from these hot dense little balls to actually map the surface and see where parts were hotter than others. And that was very challenging to do because when you actually took an image, and this wasn't a simple image it was constructed out of many different observations, but what you're actually doing is you're not only seeing the front of that object but you're seeing the back of the object too because light is bending around the object. Gravity is so strong it actually warps light around so that you see the front and the back of the object at once.

And so, to make this map we had to actually sort of deconvolve which parts were from the front of this neutron star and which parts were from the back. Now, another thing that is just kind of wonderful is that these things spin around as I said hundreds of times a second. And as they do they emit burst of radiation every time they make a spin. And that's a very, very accurate clock, they're actually more accurate than most clocks here on Earth. And what we're doing now is we're trying to use those bursts of radiation coming hundreds of times a second to create a timing device all around the Earth. And what that will be is something like a system of GPS satellites, global positioning satellite. So, all of those tiny little signals each one is a little different, each neutron star spins at a slightly different rate and you can triangulate exactly where you are based on these blips that are coming at you from the neutron stars. And what that means is that we'll have a GPS system we can use anywhere in the galaxy. So, even our deep space probes you get far away from earth like say you want to go out to Saturn, we don't have any GPS satellites out by Saturn; it's hard to know exactly where you are and we still use the positions of stars around the spacecraft to do that. But what if you had a GPS system that will never go out, it will never go down, it will stay accurate for many, many centuries if not millennia and it's not based on anything technological, anything human driven it's based on rotating dead stars in the sky?
Conceivably we could go to any of these planets that we're discovering, more than 4000 planets now around other stars, and using the same system we would know exactly where we are. So, you might not think about it but right now the space station at this moment is taking data from hundreds, if not thousands, of these spinning dead stars and we're using it to find our place in the galaxy.