Large asteroids don’t tend to hit Earth very often. But when they do, major cataclysms result. Remember the dinosaurs?

Add to this the fact that since 1998, scientists have detected about 25,000 near-Earth asteroids, while in 2020 alone, a record 107 of them came closer to our planet than the distance to the moon. With so many asteroids floating by, protecting our planet from impacts by these giant space bodies is an existential priority.

To prepare for the day when an asteroid will be heading our way, a joint study published in Acta Astronautica from the Lawrence Livermore National Laboratory (LLNL) and the Air Force, looked at how to use neutron energy output from a nuclear blast to deflect such a threat.

The scientists devised sophisticated computer simulations to compare strategies that could divert an asteroid 300 meters in diameter. In particular, they aimed to identify the effects of neutron energies resulting from a nuclear “standoff” explosion on the space rock’s path. (A standoff detonation involves detonating a nuclear device near a space object — not on its surface.) The goal would be to deflect the asteroid rather than blow it up. 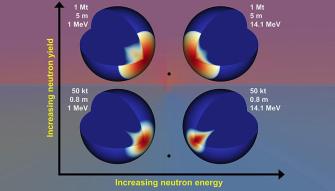 Detonating a nuclear device near an asteroid deposits energy at and below the surface.Credit: Lawrence Livermore National Laboratory

The researchers understood that they could affect an asteroid’s path by changing the distribution and strength of the released neutron energy. Directing the energy could influence how much melted and vaporized debris could be created and its speed, which in turn would alter the asteroid’s velocity. As the authors write in the paper, “Changing the neutron energy was found to have up to a 70% impact on deflection performance.”

The scientists see their work as a stepping stone in continuing research into how best to protect our planet. They plan to devise further simulations in order to comprehend more precisely the energy spread needed for the deflection strategy to work.

Lansing Horan IV led the research, while getting a nuclear engineering master’s degree at the Air Force Institute of Technology (AFIT) in a program with LLNL’s Planetary Defense and Weapon Output groups. Horan explained that their team decided to zero in on neutron radiation from a nuclear blast because neutrons are more penetrating than X-rays.

“This means that a neutron yield can potentially heat greater amounts of asteroid surface material, and therefore be more effective for deflecting asteroids than an X-ray yield,” he shared.

Another possible strategy for getting rid of an asteroid threat would be through so-called disruption. It essentially involves blowing the asteroid up, breaking it into tiny fast-moving pieces. Most of these shards should miss the Earth but around 0.5% could make it to the surface. The strategy does seem to have some drawbacks, however, if a larger asteroid came close to Earth. Exploding something like that could create a significant amount of calamity for the planet even if the whole asteroid didn’t graze us.

Horan thinks disruption may be more appropriate as a last-minute tactic “if the warning time before an asteroid impact is short and/or the asteroid is relatively small.”

Deflection is ultimately safer and less likely to produce negative consequences as it involves a smaller amount of energy than it would take to explode it. Horan said that over time, especially if we detect and deflect asteroids years before impact, even small changes in velocity should make them miss Earth.

While some may be understandably worried about using nuclear blasts close to Earth, Hogan sees it as something that may have to be considered in situations when time is of the essence.

“It is important that we further research and understand all asteroid mitigation technologies in order to maximize the tools in our toolkit,” Horan elaborated. “In certain scenarios, using a nuclear device to deflect an asteroid would come with several advantages over non-nuclear alternatives.”

One such scenario would be if there’s not enough warning and the approaching asteroid is large. In that case, a nuclear detonation might be “our only practical option for deflection and/or disruption,” proposed the scientist.

As the first Friedmann equation celebrates its 99th anniversary, it remains the one equation to describe our entire universe.
Starts With A Bang

“Most distant explosion ever” turns out to be a lie

The universe is filled with unlikely events, but is also full of ways to fool ourselves.
Starts With A Bang

It's been precisely 13.8 billion years since the Big Bang occurred. Here's how we know.
The Future

Inspired by the group behaviors of simple animals, a team of roboticists has developed a new way for swarm robots to maneuver on land.
Hard Science

The findings include signs of flash flooding that carried huge boulders downstream into the lakebed.
Up Next
Neuropsych

A study finds that sexual regret doesn't change how we behave in the future.