The asteroid 2021 PDC was first spotted on April 19, 2021 by the Pan-STARRS project at the University of Hawaii. By May 2, astronomers were 100% certain it was going to strike Earth somewhere in Europe or northern Africa. On October 20, 2021, the asteroid plowed into Europe, taking countless lives.

There was absolutely nothing anyone could do to deflect it from its deadly course. Experts could only warn a panicking population to get out of the way as soon as possible, if it was possible.

The above scenario is the result of a recently concluded NASA thought experiment.

The question the agency sought to answer was this: If we discovered a potentially deadly asteroid destined to hit Earth in six months, was there anything we could do to prevent a horrifying catastrophe? The disturbing answer is “no,” not with currently available technology.

While Europe can breathe easy for now, the simulation conducted by NASA/JPL’s Center for Near Earth Object Studies and presented at the 7th IAA Planetary Defense Conference is troubling. Space agencies spot “near-Earth objects” (NEOs) all the time. Many are larger than 140 meters in size, which means they’re potentially deadly. 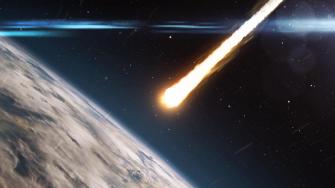 “The level [at] which we’re finding the 140-meter and larger asteroids remains pretty stable, at about 500 a year. Our projection of the number of these objects out there is about 25,000, and we’ve only found a little over one-third of those so far, maybe 38% or so,” NASA’s Planetary Defense Office Lindley Johnson tells Space.com.

With our current technology, spotting an NEO comes down to whether we just happen to have a telescope pointing in its direction. To remove humanity’s blind spot, NASA is developing the NEO Surveyor spacecraft, which they plan to deploy in 2025. The project is being supported by the Planetary Society, the same organization that deployed Earth’s first light sails. According to the Planetary Society, NEO Surveyor will be able to detect 90 percent of NEOs of 140 meters or larger, a vast improvement.

How to move an asteroid

The DART spacecraft will attempt to deflect an asteroid.Credit: NASA

The NASA/JPL exercise made clear that six months is just not enough time with our current technology to prepare and launch a mission in time to nudge an NEO off its course. (Small course adjustments become significant over great distances, which is why “nudging” an asteroid is a potential strategy.)

What would such a mission look like? Hollywood aside — remember Armageddon?— we know of no good way to redirect an NEO headed our way. Experts believe that shooting laser beams at an incoming rock, exciting as it might look, is not a realistic possibility. Targeted nuclear blasts might work, but forget about landing Bruce Willis, Ben Affleck, and Liv Tyler on an asteroid to set off a course-altering bomb, especially just a month after its discovery (as was the case in the movie).

Another thing that might work is crashing a spacecraft into an NEO hard enough to shift its course. That’s the idea behind NASA’s Double Asteroid Redirection Test (DART). This mission will shoot a spacecraft at the (non-threatening) asteroid Dimorphos in the fall of 2022 in the hope of changing its trajectory.

The harrowing “tabletop exercise,” as NASA/JPL called it, took place across four days at the conference:

“Each time we participate in an exercise of this nature,” says Johnson, “we learn more about who the key players are in a disaster event, and who needs to know what information, and when.”

Practically speaking, little can be done to hurry technological development along other than budgeting more money toward that goal. Maybe we should have Bruce Willis on call, just in case.

At four million solar masses, the Milky Way’s supermassive black hole is quite small for a galaxy its size. Did we lose the original?
Starts With A Bang

Time isn’t the same for everyone, even on Earth. Flying around the world gave Einstein the ultimate test. No one is immune from relativity.
Starts With A Bang

The idea of black holes has been around for over 200 years. Today, we’re seeing them in previously unimaginable ways.
The Well

Jim Al-Khalili: How our ancient sense of wonder drives physics deeper into the unknown

Popular media often frame scientists as having a cold, sterile view of the world. That couldn’t be further from the truth.
13.8

Astronomers in 2017 caught an image of a supermassive black hole in a galaxy far, far away. Doing it in our own galaxy is a huge milestone.
Up Next
Neuropsych

New research suggests that there is no “typical” form of Alzheimer’s disease, as the condition can manifest in at least four different ways.