Thank you to all for the comments over on the “state of the blog” post – keep those comments coming. I thought I’d send you off for the weekend with a new Mystery Volcano Photo. If you remember, last time we have a real stumper from Papau New Guinea (submitted by Dr. Philipp Ruprecht). It took a while (and for you all, that means a few hours rather than minutes), but Doug C finally identified MVP #34 as Wagifa Island (see satellite image of Goodenough Island, with Wagipa/Wagifa near the top left of the tear-shaped island), D’Entrecasteaux Island Group in PNG. The shot was taken from Goodenough Island and Wagifa Island is part of this andesite-to-basaltic andesite volcanic cluster.

updated to reflect the winner of that mystery, Jan Nygard.

As I’ve been doing for the last couple MVPs, this new image needs some exact information – so you need to identify the volcano and crater in the image … and provide a rough idea of when it might have been taken. 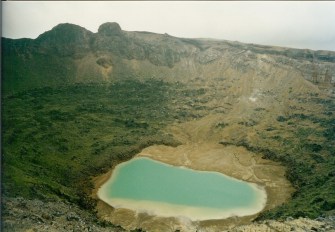 Surely they can’t be worse…can they?
Up Next
Videos

People tend to focus on “The Origin of Species,” but Darwin’s later work “The Descent of Man” has fascinating insights into human behavior and leadership.