The Nationalization of Congressional Elections

"Wave elections" may be becoming more common because of the intense political polarization that has emerged. 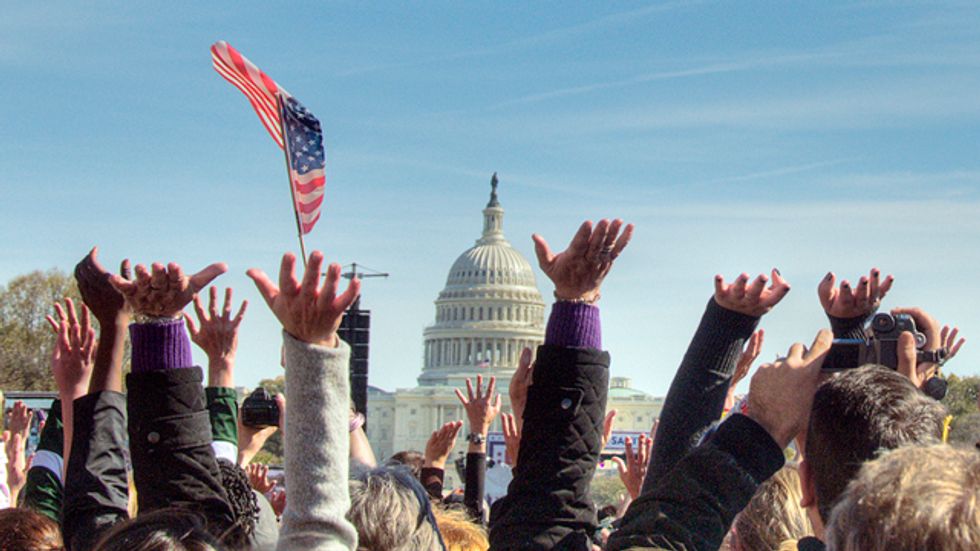 As demonstrated again in the 2010 elections, the single most significant fact about American politics over the last generation is the emergence of hyperpolarized political parties.  The parties are both internally more unified than in prior decades and more sharply differentiated from each other.  This is not a transient fact.  This polarization has began roughly in the 1980s and has been increasing constantly ever since.  Indeed, the 2010 election cycle saw an even further purification of the parties, as a number of more centrist or moderate figures were eliminated during the primary process.  As I have written about, this hyperpolarization will have numerous consequences for both elections and governance, one of which was played out yesterday:  congressional elections are likely to be more nationalized.  They will be much more referenda on the political parties and their leaders than individualized judgments about particular House and Senate candidates.  Candidates will rise and fall with the fate of their political parties more than in the past.  And the fate of the parties will be heavily determined by public judgments about the party’s leaders, particularly, for the party in power, the President.  That is the best explanation, I believe, of why we have now experienced three cycles in a row of “wave” elections, with yesterday’s being the most dramatic example.

Here’s the data to support the view that “wave elections” are becoming more common.  From 1976-2004, there was only one year in which the shift (or “swing,” in the more technical jargon) in the aggregate, nationwide vote for the parties from one election cycle to the next exceeded 5% (for data, I am relying on this paper by Nagler and Issacharoff).  That was in 1994, when the Republicans took over the House.  On average during this period, the swing between the parties was 2.18% (if we include the dramatic 1994 election) and 1.89% (if we exclude 1994).  But in 2006, the swing from 2004 was 7%, in favor of the Democrats.  That is because the 2006 elections were a national referendum, in effect, on the Bush presidency at a moment at which that presidency had become widely unpopular, as demonstrated in Gary Jacobson’s analysis of those elections.  Initial analysis from Nate Silver of yesterday’s results indicate that there was a swing of 6.7% for the Republicans from the prior election.  The 2010 election, again, was a nationalized referenda, this time on the first two years of the Obama administration.  Though individual factors influenced many races, the general pattern was again one in which candidates rose and fell with their party moreso than in earlier decades.   From 1964-2004, there were only two elections with a swing of 6% or more, 1966 and 1994.  We have now had at least two elections involving this kind of swing in the last four years.

Why are “wave elections” becoming so much more common?  My hypothesis is that it’s because of the intense polarization of the parties that has emerged.  This polarization does not guarantee that we will see much more dramatic swings for and against the parties; voters might have stable preferences between the parties over long periods of time, even if the parties are sharply polarized.  But this polarization makes wave elections more likely.  When the party labels represent clearly identifiable brands that are sharply distinct from each other, voters are more able, and more likely, to link the fates of individual candidates to each other through the party label.  Parties always try to nationalize congressional elections, if they think that’s in their favor, or make them about individual candidates, if they think that’s in their favor.  But the effort to nationalize these elections is likely to be much more effective in our era, in which the parties represent so much more of a consistent, unified, and sharply differentiated brand.  Hence, polarization, nationalization of elections, and waves of shift in support between the parties all go hand in hand.

Many other implications follow from the way polarization makes nationalization of elections more likely.  Briefly, here’s another one—I sometimes get asked why, if congressional districts are so gerrymandered, has there been so much turnover in Congress in 2006, 2008, and now 2010?  The answer, I believe, is nationalization of the elections.  Congressional seats are safer than in the past:  it takes a much greater shift in votes to the opposite party to throw out those who were elected in the new districts created after the 2000 Census. But, those much larger shifts are now more likely, as we have seen in these last three election cycles.  These tidal waves are large enough to overcome the extent to which gerrymanders are able to insulate seats.  If this is too brief to be clear, I will elaborate in another posting.  But for now, I want to emphasize the link between party polarization and nationalization of elections, and begin to raise issues about the consequences for various aspects of elections and governance.