Many in the American public are reeling due to the fact that Hilary Clinton won the popular vote, but lost the last presidential election because of the Electoral College. They are reminded of the 2000 debacle. Petitions are floating around to get rid of the Electoral College altogether, or to have them put Hilary in the Oval Office, either of which is unlikely. So what happened to American democracy? The answer is, what democracy?

The founding fathers called democracy “mobocracy.” Instead, the US is a Republic or representative form of government. It was feared at the writing of the Constitution that a demagogue could easily sway an uneducated populous, take over the country, and establish a new monarchy or a dictatorship. It’s important to note that most of the people in the country at the time were uneducated and illiterate.

Today, the high school graduation rate is the highest it’s ever been, 80%. The literacy rate is 86%. And 40% of Americans of working age have at least a bachelor’s degree.

Not only is the populous ready for a more democratic system, many believe we should embrace the type of government we espouse abroad. But there are problems concerning the Electoral College. How it works is, each state gets a certain number of votes, related to population. Electors are selected on the number of Senators and House Representatives a state has. 538 is the total number of electors today. A candidate must secure 270 in order to become president.

In this way, those living in more rural states with smaller populations are given more of a voice. When the Constitution was written, it was feared that the voices of these states would be drowned out by bigger ones with a higher population. Today, candidates spend most of their time in swing states like Pennsylvania, Florida, and Ohio. This leaves large swaths of the US electorate largely ignored. 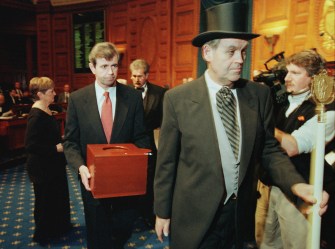 Electoral votes being counted in Congress. Many argue the system is anachronistic.

Some critics argue that the Electoral College seems to favor Republicans, and their main constituency, older, white, rural, conservative voters. That of course is up for debate. Even so, the Electoral College remains wildly unpopular, with a recent Gallup poll finding 66% of Democrats and 61% of Republicans calling to abolish the institution. What’s funny is Trump himself once spoke out against it tweeting, “The electoral college is a disaster for a democracy.”

Be that as it may, it still plays a role. According to TheNew York Times, the system helps avoid a recount, which would be difficult and expensive in close races. It would also be hard to jettison. Though malleable, the Constitution is difficult to change. To eliminate the Electoral College altogether, a two-thirds vote would have to pass Congress and 38 states, which is highly unlikely.

The fact that the popular vote doesn’t put a president in the White House is causing many to lose faith in the system, as the wave of protests across the country have demonstrated. The Electoral College may be unpopular and anachronistic, but it seems that we’re stuck with it. This has political scientists, Constitutional lawyers, and others scratching their head. At a time when America should be coming together, it is instead more deeply polarized.

So how can we make the people’s vote count in a democratic and pragmatic fashion? A workaround has been drawn up. The National Popular Vote Interstate Compact (NPVIC), is a measure that would ensure that the popular vote puts a candidate into the White House. The idea is to get enough electors to agree to vote the way the popular vote goes across the nation, rather than in their own particular state. The compact needs to get 270 electors onboard, the number required to secure the presidency. Protests in cities across the US after Trump was elected energized the debate surrounding the Electoral College.

Say New Jersey is our focus and its electors have signed on. In this scenario, they can award their votes to their state’s winner, rather than the national winner, up until 270 electoral votes is reached. Once that occurs, those electors who pledged to the NPVIC, would have to give their votes to the national winner of the popular vote, even if it counters how their state voted. For instance, George W. Bush would have secured New Jersey’s electoral votes in 2004, a solidly blue state, if it operated under this system. This can only happen after enough electors have signed on.

Surprisingly, it’s gotten backing from both Republicans and Democrats, as the measure is thought to help restore some faith in the system. 11 states and Washington D.C. have signed on already, securing 165 electors thus far. One advantage is that Congress is kept out of the matter. Another is that this plan would give individual votes more weight, allowing voters to feel that their vote mattered.

There are a few hang ups however, including the fact that those swing states wield a lot of power under the current system, and might not want to give it up. Another is that a deeply red state may have to go blue in a tight race or vice-versa. The immediate aftermath of this election is the perfect time to contact one’s representative and show support for the NPVIC. If a tidal wave of voters showed support, it might see the plan implemented. Otherwise, it’s likely that this initiative will lose steam and fade away.

A recent ATTN post covered a series of tweets from former Congressional staffer Emily Ellsworth, about the best way to contact one’s Senator or House Representative. She worked as a staffer for six years, serving under Rep. Jason Chaffetz (R-Utah) and Rep. Chris Stewart (R-Utah). Ellsworth said that contact through social media was largely ineffective.

A letter to the district office made more of an impact. But it is impossible to read all the letters, and many of the emails get batched and scanned, then evaluated by an algorithm. The best way to get a Senator or House Representative’s attention is to call their district or state office. If you are American and feel strongly about this, find your representative’s contact information here: https://www.usa.gov/elected-officials. Contacting state officials is worthwhile too, since states establish their own election laws. You can find state representatives through the aforementioned link as well. Tell them you support the NPVIC.

Expert Matthew Ball explains how the Metaverse is a golden opportunity to fix the internet.
▸
4 min
—
with
Matthew Ball
Up Next
Technology & Innovation

A new partnership is leveraging the power of AI to hunt down online sex traffickers.