The internet? We don’t need to tell you what a game-changer it’s been. It’s our infinite library/newsstand/theater, and social media has expanded our ability to connect with each other. Unfortunately, it’s also proven to be a dream come true for sex traffickers who’ve invented brand-new ways to capture and exploit prey. Thorn, a non-profit dedicated to fighting child sexual exploitation, is fighting back using the latest technology to assist law enforcement in putting a stop to it.

There are a range of ways in which the internet has become the center of sexual exploitation, with an estimated 325,000 U.S. children currently at risk:

Actors Ashton Kutcher and Demi Moore founded Thorn, and explain its mission in this video from 2013:

As “Digital Defenders of Children,” Thorn has recently partnered with company Digital Reasoning to develop Spotlight, a new web-based technology built on AI. “Coming face to face with the sheer numbers of children being trafficked for sex and the number of disgusting pictures being circulated on millions of machines around the country made us sick,” writes Tim Estes, founder and CEO Digital Reasoning on the company’s site.

Spotlight leverages Synthesys®, Digital Reasoning’s cognitive computing platform. It finds patterns in oceans of internet data, and produces leads for law enforcement regarding suspected trafficking networks and individuals in order to shut them down and to assist and identify their victims. In the last 12 months, Spotlight has identified 6,325 victims, of whom 1,980 are children. It’s also pinpointed 2,186 traffickers, assisting authorities nationally in 7,442 cases.

Top 5 states in which Spotlight is helping (THORN)

Synthesys’ cognitive capabilities allows it to uncover well-hidden criminal activities. An estimated 100,000 escort ads are temporarily posted every day before being quickly taken down before they can be tracked and reposted at a later time. Victims ages and identities are falsified, and sometimes their faces are hidden in the ads. It’s a twisted mess for law enforcement. Spotlight uses methods such as language analysis and the collating of data from seemingly unrelated sources to see behind the subterfuge. It helps authorities follow the true history of a victim’s exploitation with the aim of locating and rescuing them.

According to one Homeland Security investigator, identified as “Amy” on the Digital Reasoning site, “I cannot even recall life before Spotlight. Every single phone number coming across my table that I suspect may be involved in gangs, drugs, or trafficking, I immediately plug into Spotlight.” 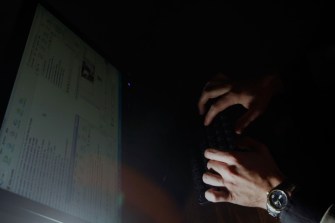 A federal agent in Hawaii says on Thorn’s Spotlight page, “Spotlight is a force multiplier at every stage of the operation. We can use this tool to gather intelligence and plot trends prior to conducting an operation, during the operation we can allocate resources effectively and tighten our investigative vision to have the greatest immediate impact, and following this operation we can couple Spotlight with information gathered in interviews to develop a more complete picture of the scope of Human Trafficking in our area.”

We read all the time about developments in AI and the ways in which it may make lives better. Criminals can be shrewd — Spotlight helps law enforcement outsmart them, and it reminds us how powerful technology can be in the hands of the right people.

If you’d like to know more about Thorn and learn how you can help, visit their site.

Based on product labeling claims, scientists hypothesized that green cleaners were less toxic. They were wrong.
Up Next
The Past

Much news on the Internet is very similar to the dangerous “yellow journalism” of history.