There are only so many kinds of stories — but the exact number is up for debate. Joseph Campbell and Christopher Vogler found one major story by studying the world’s mythology. Christopher Booker came up with seven types of stories by analyzing novels. Even Kurt Vonnegut jumped into the fray, outlining eight kinds of stories across all of literature. Now science settles the debate once and for all.

Scientists at the University of Vermont’s Computational Story Laboratory looked at all those types of stories and many more. Amongst all the different classifications they found a common theme: characters grew in them. They changed by the end of the story. They gained wisdom and emotional depth. They became better people, and that arc connected with the listeners and later readers who discovered the story. “Our ability [as humans] to communicate relies in part upon a shared emotional experience,” the researchers explain in the study, “with stories often following distinct emotional trajectories, forming patterns that are meaningful to us.”

That said, researchers realized that those emotional trajectories might be the real root of all our stories. They might also have patterns that could be codified and analyzed, inspiring them to use data mining tactics to figure it out. In a study published on arXiv, the research team decided to focus their search on story plots, because “the plot captures the mechanics of a narrative and the structure encodes their delivery…. we examine the emotional arc that is invoked through the words used,” the researchers explain. So in order to figure out the words creating that arc, they looked at public domain stories from Project Gutenberg. They looked at the 1,737 most popular books on the site and used its metadata to analyze 10,000 “word windows” or groupings of words expressing the emotions a character throughout the story: 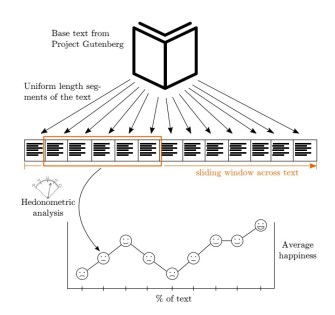 Schematic of how the team computed emotional arcs. Credit: arXiv

Those word windows gave the researchers enough data to perform a sentiment analysis of words with positive and negative emotional impact. As they explain, “words can be a measure of the emotional valence of the text and how it changes from moment to moment. So measuring the shape of the story arc is simply a question of assessing the emotional polarity of a story at each instant and how it changes.” The emotional polarity of a story is simply whether something good or bad happened to the main character. By using word windows and principal component analysis, researchers measured the polarity and defined the story’s emotional arc. You can play with an interactive word window yourself to see how — or check out an illustrated example from Harry Potter and the Deathly Hallows below:

The results? “Six core trajectories which form the building blocks of complex narratives,” according to the study. “We find broad support for six emotional arcs.” Those arcs are variations on rising and falling trajectories. They are:

Questioning isn’t just a way to get the right answer — it’s also a means for sustaining relationships and creative thinking.
Up Next
Personal Growth

Does the Ark Encounter Violate the First Amendment?

The Freedom From Religion Foundation sent out over a thousand letters warning public schools away from this creationist propaganda.