The most famous study in psychology turns out to be theater, and the lead researcher is over defending his myth. 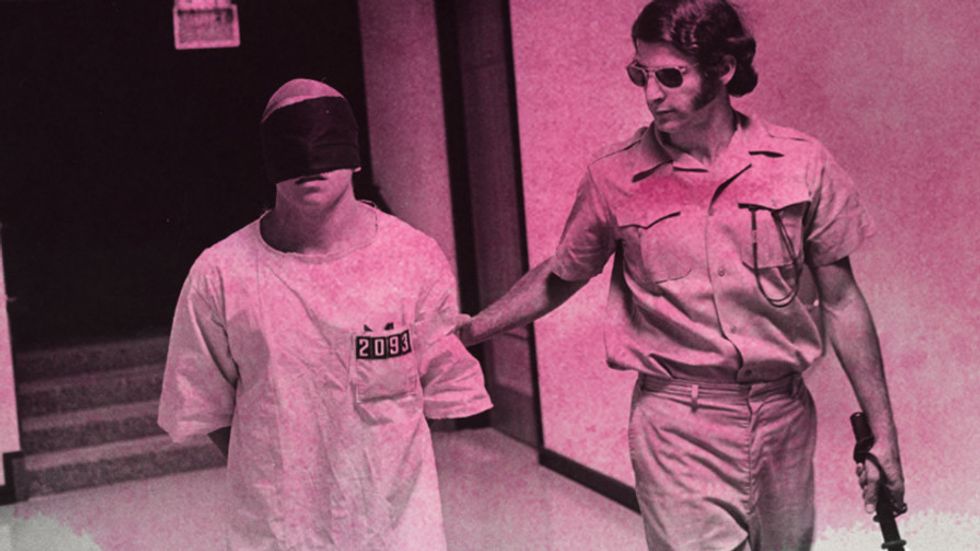 Provided by the Stanford University Libraries.

Scientific experiments make for good movies. The 2010 film, The Experiment, is an emotionally gripping retelling of the famous 1971 sociological study, the Stanford Prison Experiment. Featuring Adrian Brody and Forest Whitaker, it’s based on a 2001 German version of the same study, Das Experiment. (The first film on this topic was 1977’s La Gabbia by Italian director Carlo Tuzii.) Not content with those versions, a slick rendition was made in 2015. The Stanford Prison Experiment was based on study leader Philip Zimbardo’s book, The Lucifer Effect. Though enjoyable it did not hit near nearly as hard as Paul Scheuring’s 2010 version.

How could it not be disturbing, however? We know the basics, given how prominent this research has been in psychology textbooks over the last half-century: a deep dive into the psychology of power through the observation of nine "prison guards" and nine "inmates"; volunteers housed in a Stanford University building, assuming one role or the other; though everyone was clear it was role-playing, the guards quickly became authoritarian and abusive, the prisoners, rebellious or submissive. Pledges of “no violence” were quickly abandoned. The two-week experiment shut down after only six days.

Ever since the literature has been clear: men are inherently violent and will assume total power if given the opportunity. The study points to our inherently aggressive biological roots, harkening back to longtime tribal allegiances. The individual immediately becomes an archetype, their behavior based not on personal characteristics but the environment they’re thrust into.

The Stanford Prison Experiment (SPE) has long been considered a lucid rendering of who we really are as animals. Yet since inception, it has been equally criticized. A new expose has put the validity of the entire experiment into question.

Ben Blum became interested in crime after his cousin, Alex, participated in a 2006 bank robbery by a group of Army Rangers. For seven years he investigated what led to that crime, resulting in his book, Ranger Games. Discussing the uncritical acceptance of Stanford’s results, Blum writes:

The SPE is often used to teach the lesson that our behavior is profoundly affected by the social roles and situations in which we find ourselves. But its deeper, more disturbing implication is that we all have a wellspring of potential sadism lurking within us, waiting to be tapped by circumstance.

The breakthrough moment leading to mainstream attention involved the volunteer, Douglas Korpi, effectively losing his mind. All is not what it seems, however. In an interview with Blum last summer, Korpi, now a forensic psychologist, says that any “clinician would know that I was faking.” He relates the scene to dramatic role-playing in an acting seminar, claiming he was more hysteric than psychotic.

Korpi initially enrolled because he thought it would be a good opportunity to study for the GREs. He grew antsy when prison guards refused him his study books. Faking a stomachache didn’t work, so he feigned madness. The greatest psychological scam in modern history is the result of an impatient grad student throwing a temper tantrum because he misunderstood the parameters of the experiment.

This study was certainly emotional. But the boundaries remain obscured. Some volunteers claim Zimbardo wouldn’t let them out when they wanted to leave, while the lead researcher claims a “safe phrase” would have automatically released them. Yet there is no evidence of such a phrase in the contract. The guards really did ratchet up aggression. But the fever pitch of psychosis, as portrayed in the cinematic retellings—disturbingly so, you Germans—is the narrative of film, not life.

This isn’t the only experiment to incorrectly reverberate in public consciousness. As Brian Resnick writes, a replication crisis (which I recently wrote about regarding clinical studies) is a chronic problem in sociological experiments. Resnick writes that a whole host of research, including the famous “marshmallow test,” as well as experiments on social aggression, ego depletion, and stereotypes, are failing to be replicated. Sometimes, he writes, the problem begins with the intention of the researcher:

It’s wrong to throw out data that refutes your hypothesis and only publicize data that supports it.

Though some data are corrected—the false notion that humans only use 10 percent of their brain power, for one—it’s too late. Once an idea enters mainstream vernacular, disproving myths proves impossible. Resnick continues:

In science, too often, the first demonstration of an idea becomes the lasting one—in both pop culture and academia. But this isn’t how science is supposed to work at all!

During Blum’s interview, Zimbardo claims this to be his last interview on the topic. His legacy will forever be those flawed six days and frankly, the professor is over people questioning him:

In a sense, I don’t really care. At this point, the big problem is, I don’t want to waste any more of my time. After my talk with you, I’m not going to do any interviews about it. It’s just a waste of time. People can say whatever they want about it. It’s the most famous study in the history of psychology at this point. There’s no study that people talk about 50 years later.

Which, of course, is not good science. Truth does not emerge because someone is tired of defending their cover-ups. Zimbardo seems content with his study’s longevity and fame, unconcerned about his skewing of evidence. He even plays the victim near the end of the interview.

Powerful stories make for compelling television. How pertinent it is to actual life is another story. The difference between what happens on a screen and in “real life” is becoming blurrier as it is. The influence of the two is now bidirectional, for better or worse. While this is great television—one teen drama on Facebook highlights this blurring of reality and script—life itself has become a story we’ll grapple with, moment by moment. How true each is remains to be seen.