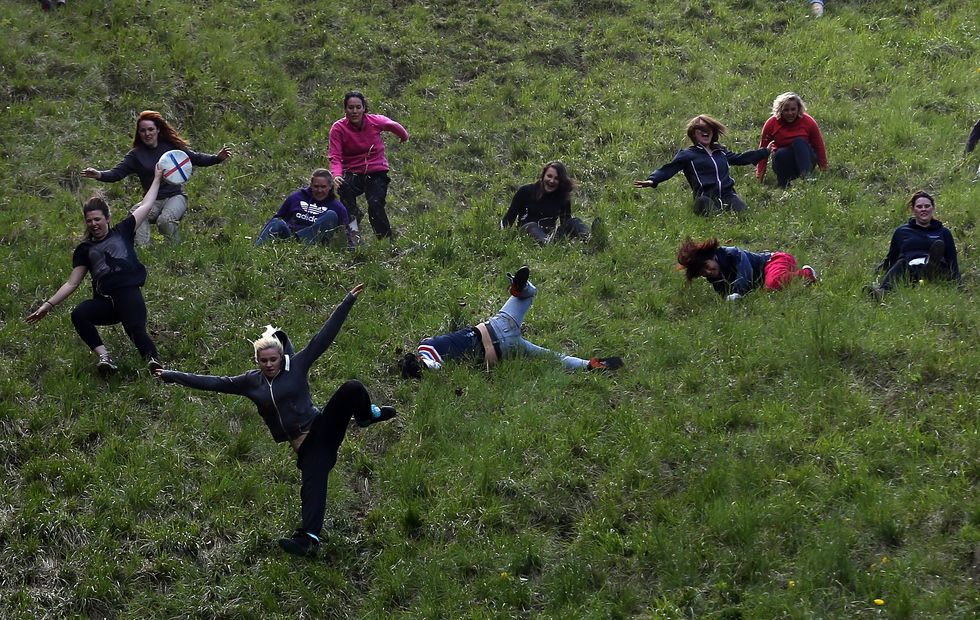 Contestants in the women's race chase a replica Double Gloucester Cheese down the steep gradient of Cooper's Hill during the annual Bank Holiday tradition of cheese-rolling on May 27, 2013 in Brockworth, Gloucestershire, England. (Photo by Matt Cardy/Gett

People take fitness seriously. Those ten thousand steps. Marathon over, time to tackle the ultra-marathon. Pounds upon pounds on the squat rack—just make sure to post it or it never happened. And yoga, well, people take their yoga very seriously.

Taking health seriously is wonderful, arguably better than not considering it at all. That said, one of the greatest joys of exercise is play. Your workout should be hard, otherwise you'll plateau and never grow stronger. Yet this does not imply it can't be fun. Many sequences I create for my classes begin with me rolling around on the floor. In fact, that's what inspired me to pursue fitness in the first place, a dance class in which crawling around was mandatory. It reminded me of my youngest years rolling down hills because, well, the hill was there. Only later do we justify what once was spontaneous and pleasurable.

Though play we learn essential life skills. We tumble and push and roll and incorporate the lessons into the grander sweep of life. Play is a means of discovering boundaries. Humans and quadrupeds aren't the only animals that master skills in this manner. New research from the University of York shows that crows and parrots learn through play.

The study, led by researchers at the Universities of York and St Andrews, demonstrated that two types of bird were able to solve tasks more successfully if they had explored the object involved in the task beforehand.

By explore, the researchers mean playing with the objects: peck at it, roll it around, flip it over, figure out what it can do. The researchers chose the New Caledonia crow as it has been observed using objects in the wild, while kea parrots are a particularly destructive breed that seem to play harshly through their environment.

The team offered the birds various blocks and ropes. They then offered a tasty reward to find out if the birds could figure out how to use the objects to retrieve their food. Researchers mixed up the tools in later sessions to see if they could remember which tools did what. They did.

This means that the birds did not appear to explicitly seek information about the objects, but rather learned about their properties incidentally through exploring them.

Philosophers have championed play for eons. Alan Watts noticed Western societies treat work as a serious endeavor, far removed from any implications of play. He believed our social and sexual rigidness came from this oversensitivity to the serious—he once said that the gods of the East laugh and play while the God of the West is a stern fellow, indicative of the cultures that created their deities.

To Watts the West has it backwards: you work hard to earn enough money to acquire enough leisure time in order to play. What if we reorient our perception so that our vocation is similar to playing the guitar or dancing? We'd have much more energy at the end of the day, he argues, for we'd enjoy the process of playing at life instead of dreading our tasks in order to achieve a reward later—a rather religious sentiment.

[Watts suggests that we] do everything you have to do in this spirit. Don’t make a distinction between work and play. Regard everything that you’re doing as playing, and don’t imagine for one minute that you’ve got to be serious. Easier said than done. But the idea is not without precedent. We all learned through playing at some point in our lives, whether stacking wood blocks into castles or by attacking invisible windmills with twig swords. The late neuroscientist Jaak Panksepp believes play is such an important component of our genetic make-up that he labelled one of the brain's seven primary processes the PLAY system.

Beyond boundaries, Panksepp speculates that this system helps us learn “nonsocial physical skills," such as foraging and hunting. Play is paramount in social skills as well, from courting and sex to developing friendships. It helps us compete for status and cooperate when necessary. Panksepp puts playing at the very foundation of what we call society:

[Play] may be an essential force for the construction of many higher functions of our social brains.

After knee surgery I was told I should stop jumping. This made no sense to me, as jumping is one of our body's four primary movements. With the repetitive stress of running, which is a short, controlled form of jumping, out of the equation, I began box jumping to increase my vertical jump as well as strengthen my posterior kinetic chain.

A high box at first seems insurmountable. And indeed, if you overthink the leap, it is. Every time I focus on the height I don't make it. A few months ago I started playing a game with my friend and workout partner, Jeff. We go jump for jump, three series of ten, back and forth. Before we knew it we were both clearing heights that once seemed impossible.

Can we translate this simple gym game to society? If all parties are willing, certainly. But humans take themselves quite seriously. More to the point, we take our points of view as if they're the last word on matters, especially when dealing with politics and spirituality. We think too highly of ourselves; any evidence to the contrary is immediately denied, or worse, mocked. While some confuse mocking with play, the only people who laugh at cynical and unwarranted bigotry under the guise of humor are those afraid of actually testing their own boundaries.

So we remain serious, which is a shame. The NY Times points out that more teenagers are suffering from anxiety than ever before. Anxiety is the most common emotional disorder in the world, yet instead of instilling a healthy relationship with mechanisms for relaxing our stress, we reinforce the problems that led to such overwhelming anxiety in the first place.

Anxiety is a multifactorial issue—I suffered from this disorder for 25 years—I'm not suggesting that rolling down a hill would solve all the world's problems. But it might help. We'll never discover the wisdom of play until we try it out. We might not be able to fly like birds, but we can certainly learn from their other skills.