The heaviness of this moment is impossible to overstate. Anxiety and depression are rising due to COVID-19. A severe economic downturn is having a toll on many Americans. Interventions like meditation, cognitive reframing, and exercise are important, but for growing numbers of people, not enough.

There isn’t one method that can lift you out of depression and curb feelings of uncertainty. A multivariate approach is needed. One of the seemingly simple yet effective methods shown to lift moods is playfulness. As a new study from Martin Luther University Halle-Wittenberg shows, playfulness can be trained.

Play is deeply embedded in many species. Young animals play in order to set boundaries and explore social conditions. This social skill causes young children to wrestle and roll down hills. The late neuroscientist Jaak Panskepp believed play to be an ancestral system in our brains. He says this instinct is necessary in children even if adults are confounded by it.

“There is no ambiguity among young children; they instinctively know what play is. Academics get confused, parents get confused — calling what their children are doing ‘naughty,’ ‘aggressive,’ ‘being bad’ — but kids are having fun, so we know that there is that one play system in the brain.”

The Primal Power of Playwww.youtube.com

Many adults lose their sense of play as they age, though some retain it. Previous research has shown playful adults appear to experience better moods. The team in Germany wanted to know if playfulness can be taught, even in serious adults.

“Particularly playful people have a hard time dealing with boredom. They manage to turn almost any everyday situation into an entertaining or personally engaging experience.”

Proyer’s team divided 533 volunteers into three groups. One group was tasked to write down three playful situations they experienced during the course of their day for seven nights; another group was asked to reflect broadly on any playful moments throughout the day; the control group was given an assignment irrelevant to the study.

Every volunteer filled out a questionnaire before the study began. They then responded to questionnaires four times after the intervention, the last being 12 weeks after the study’s conclusion. Researcher Kay Brauer, part of Proyer’s group, believed people could train themselves to be more playful.

“Our assumption was that the exercises would lead people to consciously focus their attention on playfulness and use it more often. This could result in positive emotions, which in turn would affect the person’s well-being.” 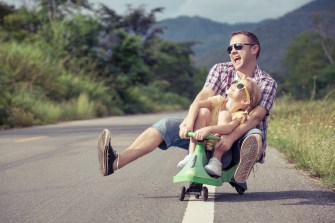 The team was right. The group tasked with writing down playful experiences experienced an increase in well-being. Proyer feels this could be used at work and in romantic relationships, as well as in life in general. Being an intuitive, ancestral component of the human experience, any opportunity to play should be taken seriously as part of a holistic program for mental health.

While Panksepp focused his career on play in children, he admitted adults can also play. He was concerned that play-reducing medications like Ritalin stunts this ancestral need. As he says,

“We have to develop a society that understands play, and the many good things it does for children’s brains and minds. We developed the concept of having ‘play sanctuaries,’ where children have safe environment to play and develop their own games. We have much to learn about how good play is for the brains of our children.”

As this new research shows, play is healthy at any age. Perhaps we all need to create a play sanctuary. While it won’t solve the world’s problems, it could help the days pass with a little more levity.

Protein fibrils accumulate in the brain during neurodegeneration. Cryo-electron microscopy has now uncovered fibrils of an unexpected protein.
Neuropsych

To reap the benefits of digital technologies, we must contend with their addictive designs.
Up Next
Neuropsych

How a mother’s voice shapes her baby’s developing brain

Most of us carry a mother’s voice in the neural patterns of our brain.