First, a clarification. We haven’t found dark matter or dark energy, which together are thought to make up about 98% of the universe. In fact, according to Neil deGrasse Tyson, we shouldn’t even call it dark matter, because we don’t know that it is in fact matter, or even what it is. He suggests we use the term dark gravity.

Regardless, 70% of the universe is thought to be dark energy and 23% dark matter. While all the so-called normal or ‘baryonic’ matter comprises just 5% of our cosmos. The discovery just recently announced is relegated to this “normal” realm. This is a relief among astronomers, astrophysicists, and cosmologists. Among the trillions of observable galaxies that make up the known universe, something was missing—until now: what matter exists in between galaxies.

Stars and galaxies make up about 10% of normal matter. Outside of that, scientists weren’t sure where about half of the regular matter in the universe was. Though they have speculated about it for decades, we now know that clouds and strands of hot gases connect galaxies together. Locating them “has been one of the major challenges in modern cosmology,” researchers write, in a report published in the journal Astrophysics. 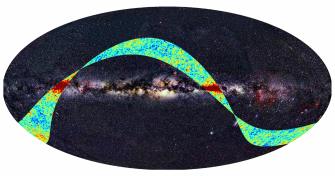 Two groups of scientists made the discovery, one led by Anna de Graaff at the University of Edinburgh, in the UK, and the other led by Hideki Tanimura at the Institute of Space Astrophysics in France. Both teams utilized the Sloan Digital Sky Survey in their work, the most comprehensive, 3D rendering of our universe to date.

Scientists suspected missing baryons inhabited “filamentary structures in the cosmic web, forming a low density gas.” But this gas wasn’t hot enough for them to pick up on X-ray telescopes. They’re also way too thin to be seen visually. Another method of detection had to be found.

In this study, researchers attempted that using the thermal Sunyaev-Zel’dovich (SZ) effect. The remaining radiation from the Big Bang, known as the cosmic microwave background (CMB), is at this moment bouncing around the universe. When such particles pass through hot gas filaments, they gain energy. The photons from the CMB kick out electrons found in the gas, creating warm-hot intergalactic matter (WHIM) that can be picked up with equipment and studied. This phenomenon is known as the SZ effect. 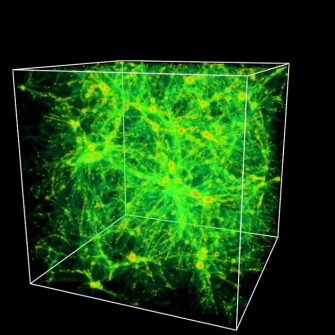 Galaxies in the universe were already considered to be interconnected in a web, with galaxies and galaxy clusters strung along the strands. But this was all speculative, until now. What researchers did was they stacked these areas found between galaxies together, making them easier to detect.

While the French team combined the data of 260,000 galaxy pairs to detect baryon filaments, the Scottish team stacked over a million. The French group found the strands four times denser than normal matter, whereas the Scottish one found them six times denser. But accounting for the French group’s approach, which used filaments that were at varying distances, the findings were actually similar. This proves that the gases were dense enough to form the strands that hold the universe together.

One important thing to note, according to astronomer J. Michael Shull of the University of Colorado, Boulder, is that such gases may not align perfectly between galaxies. Or so he told Science Magazine. It may take on a more complex configuration within a 3D space. Still, this discovery allows for scientists to understand matter and our universe better. Even so, mysteries still abound. We remain clueless on the vast majority of what makes up our cosmos.

Is the universe controlled by gigantic structures?

8 Yale University courses you can take online, for free

“The value of a college education is not the learning of many facts but the training of the mind to think,” Albert Einstein said. So go back to school, Ivy League style.
Hard Science

Churchill displays a surprising amount of knowledge on a question that we are still wrestling with.
Up Next
Technology & Innovation

Is This The Secret Behind the Mysterious Em Drive?

The secret behind the Em Drive’s thrust, which is real, may be in the long-discarded pilot wave theory.