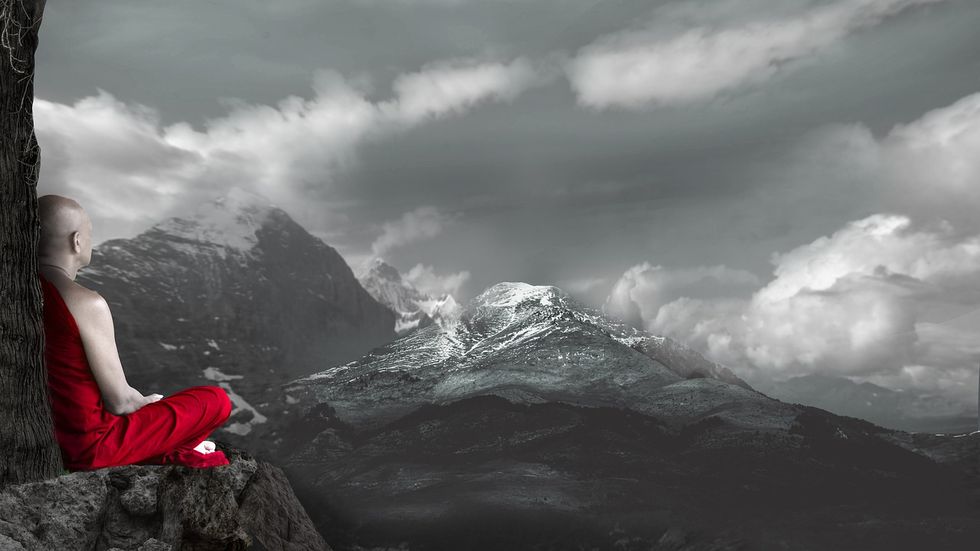 If you’ve ever meditated, you likely know the positive feelings that follow a seated practice. You feel lighter, calmer, focused—the general contours of the interplay of conscious intention and neurochemistry. Later, in the midst of chaos—stress at work; relationship trouble; death of a loved one; spending five minutes on Twitter—you wonder where that sense of inner peace went. Life is always relatively turbulent and peaceful. Meditation is no cure-all, though its effects persist long beyond the initial experience. At least seven years, according to a recent study conducted at the University of California, Davis, published in Journal of Cognitive Enhancement, proclaims.

The goal of this study was to discover if attentional capacities last beyond an initial period after intensive meditation. The team, led by Clifford Aaron, a research scientist at UC Davis’s Center for Mind and Brain, and lead author Anthony Zanesco, a postdoctoral researcher at the University of Miami (formerly at UC Davids), had already assessed the cognitive benefits on attentional performance after three months of “full-time meditation.” This new study represents a seven-year follow-up.

The initial study is based on the Shamatha Project, a series of two three-month retreats conducted at the Shambhala Mountain Center in 2007. The study followed sixty volunteers practicing Buddhist mindfulness meditation for six hours a day. The benefits of immediate changes in the meditator’s brains are now well-documented. The UC Davis team wanted to better understand how this plays out over the long-term.

Longitudinal investigations that track practitioners across periods of training and years of practice are critical for understanding the durability of trait-level cognitive changes associated with meditation, and for broadly characterizing the influence of attentional training on cognitive development across the lifespan.

Since cognitive decline, both in terms of memory and executive function, becomes more problematic as we age, the team wanted to know if meditation can help stave off such cognitive troubles. Many people remain sharp and lucid into their ninth and even tenth decades of life, so such a decline is by no means guaranteed. After the results of this study came in, the team was confident that answer is yes, meditation helps keep cognition humming along. As Zanesco comments,

This study is the first to offer evidence that intensive and continued meditation practice is associated with enduring improvements in sustained attention and response inhibition, with the potential to alter longitudinal trajectories of cognitive change across a person's life.

Immediately following the initial study, volunteers noted improvements in attentional capacity, ability to deal with stress, and general well-being. This alone is an important (and clinically repeated) phenomenon, especially in an age of increasing psychological disorders. As the NY Times reports, for example, anti-depressant withdrawal is proving impossible for many people suffering from depression. Alternative non-pharmacological interventions, such as meditation, as well as psychedelic therapy, need to be investigated, considering that depression rates and prescription rates are both rising. Depression is only one of the problems meditation addresses. The volunteers in the original group followed up on their gains at six and eighteen months. Now, seven years later, forty of the participants continue to mediate an hour a day. The gains experienced in Colorado are still present. This is in stark contrast to antidepressants, which often lose efficacy over time, requiring stronger doses and the assistance of other drugs to counter the side effects of the increased dosages as well as to better promote the initial effects.

The more time people put into meditation, the clearer the gains. Those at the upper end (an hour a day) showed no signs of cognitive decline. Though there were no further improvements after the period of intensive meditation, the gains were preserved by a regular practice. As the team concludes,

Continued meditation practice seems to be associated with substantial experiential and developmental influences on practitioners’ attentional capacities over the lifespan.

These results could provide alternative therapies for those suffering from psychological disorders, attentional problems, and the cognitive decline in memory and executive function we normally associate as a necessary consequence of aging. That is not necessarily the case, provided we put interventions such as meditation into action.