Walter Isaacson is a renowned biographer, CEO of the Aspen Institute, and previously the chairman of CNN and managing editor of TIME magazine. He is the author of Einstein: His[…]
Go to Profile 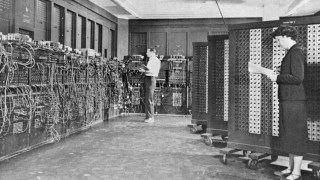 Walter Isaacson on Alan Turing and the Imitation Game

Biographer Walter Isaacson talks British mathematician Alan Turing, the inventor of the Turing Test and one of the subjects of Isaacson's newest book, "The Innovators."
▸
3 min
—
with
Walter Isaacson

Biographer Walter Isaacson compares Alan Turing’s computing philosophy with that of Ada Lovelace a hundred years prior. Turing, the subject of the new film “The Imitation Game,” is also featured prominently in Isaacson’s new book “The Innovators.”

Walter Isaacson: It’s great to trace things back to Alan Turing. You know he’s in Bletchley Park, England. He had come up with the concept of the universal computing machine but then he has to help put it in practice to break the German wartime code. So he comes up with a device called the bomb and then colossus and these are machines that can break the code and he starts thinking about the difference between human imagination and machine intelligence. And it goes back to what he calls Lady Lovelace’s objection. It goes back to Ada Lovelace a hundred years earlier who had said machines will be able to do everything except think. And so Turing comes up with what he calls the imitation game. Now we call it the Turing test in which he tries to figure out how would you tell the difference between a human and a machine. How would you know the machine’s not intelligent. He says well put a human and a machine in a different room, we send them in questions and if after a while you can’t tell which one’s a machine and which one’s a human, then it makes no sense to say the machine isn’t thinking.

Now you can have philosophical arguments about whether or not that’s a good test but ever since then, it’s been about 65 years since he came up with that concept, we’ve been trying to invent machines that would pass the Turing test or the imitation game. Every now and then you read about a machine that can sort of do conversational gambits and maybe confuse a person for five minutes or so and sort of try to pass the Turing test. But surprisingly we found it very difficult to have machines that can really carry on a conversation and be confused with a human. You can usually tell the machine from the human. A different way of looking at the way the computer age evolved is sort of Ada Lovelace’s way which is that computers and humans will evolve symbiotically. They’ll be partners. We will get more intimately connected to our machines and the machines will amplify our intelligence and our creativity will amplify what the machines could do. And we don’t need to try to create robots that’ll work without us. It’s kind of cooler to create this partnership of humans and technology or as she put it the humanities and engineering. So those are really the two schools of thought in computer programming. And every now and then you hear people say the singularity’s coming or we’re about to get to the age of artificial intelligence and machine learning. And I suspect it may come but it’s always about 20 years away. And in the meantime it’s sort of the Ada Lovelace vision rather than the Alan Turing vision. The vision of having machines that connect to us more intimately rather than replace us and don’t need us anymore.

Slavoj Žižek: Events and Encounters Explain Our Fear of Falling in Love