Jonathan Zittrain is a Professor of Law at Harvard Law School, Professor of Computer Science at the Harvard School of Engineering and Applied Sciences, Vice Dean for Library and Information[…]
Go to Profile 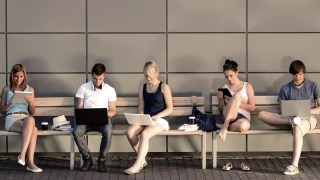 Why Wikipedia Works Really Well in Practice, Just Not in Theory

Harvard University’s Jonathan Zittrain explores the amazing success of Wikipedia, a concept that “works really well in practice, just not in theory.” Not only is it a remarkable and unique model of a self-regulating entity, but also its governors and stakeholders are both members of the public at large. Zittrain examines whether Wikipedia is something that can be sustained long-term, whether it will need to adapt or grow in the future, and whether such adaptations and growth could potentially scuttle the entire operation. Finally, Zittrain offers up a suggestion for how to apply Wikipedia in an academic setting: Why not turn Wikipedia articles into long-term research projects?

Jonathan Zittrain: There's a great saying that Wikipedia works really well in practice, just not in theory. And that is true. Wikipedia's success is so singular, so spectacular that figuring out whether it's a model for anything other than Wikipedia is a puzzle that even the folks behind Wikipedia have faced as they've tried to do Wikisearch, Wikinews, and Wiktionary at different times. But the idea of having a scheme where the day-to-day governance, the day-to-day edits, whether done for substance to improve the truth level of an article in the view of the editor or done for process, oh that edit shouldn't have been made; it breaks the following rule; I'm going to revert it. To have the people doing that be members of the public at large is an extraordinary devolution of responsibility out to people who are in one way or another, implicitly or explicitly sort of taking an oath to subscribe to the principles behind Wikipedia of neutrality, of fairness, of learning — kind of the values of the enlightenment. And can that survive itself over the long haul? I don't know. As you get more and more importance attached to Wikipedia, more and more places that draw from Wikipedia as a source of data, whether it's something like the Wolfram Alpha Knowledge engine or Google to assemble basic facts for results in a search. There may be more and more reason for entities to want to game the results.

If you can just put yourself in the Guinness Book of World Records for having the longest beard or something and you don't actually have to grow anything, it's like well why not? I'll vote myself rich. These are problems that Wikipedia has had to deal with so far relatively successfully. And there's a level of humility that I think it has to maintain in order to recognize new problems, to recognize where there might the structural forms of bias or discrimination going on. And to be able to endure the more targeted intentional attempts to basically poison the well of truth that Wikipedia at least aspires to be. What would I propose as a longer-term way of shoring it up? I think we should solve a problem with a problem. We haven't really figured out in the early 21st century what to do with kids who are in school for hours at a time every day sort of warehoused in daycare; I think it would be wonderful to make as part of the curriculum from, say, sixth grade onward part of your task and what you'll be graded on is to edit and make the case for your edits to an article on a service like Wikipedia and then we'll have new ranks of people being supervised by teachers who are working on the articles and on the product and that maybe even will apprentice to the norms by which you have an argument over what is true and what isn't. And maybe some of them will choose to continue on as Wikipedians even after the assignment is over. So to me if I think of an advanced civics class, it's great to learn that there are three branches of government and X vote overrides a veto, but having the civics of a collective hallucination like Wikipedia also be part of the curriculum I think would be valuable.

What Mark Zuckerberg and Beyoncé Can Teach You About Getting Attention