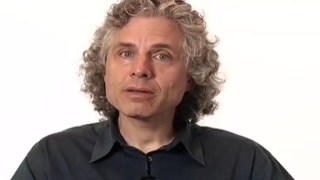 Pinker: I did what I think is, and for a long time to will be the most exhaustive study of one aspect of child language development.  The fact that kids make errors like, “We holded the baby rabbits,” and “The alligator go kerplunk.”  Or they add a regular suffix like    “-ed” to an irregular verb like “hold” or “hear” or “stick”, producing errors like “sticked” and “teared” and “holded”.  I analyzed 20,000 of those forms from computer transcripts of children developing language, and developed a theory of why kids make that error, how they outgrow it, what it shows about language.  The reason to obsess over a tiny little topic like that is that it’s a nice illustration of children’s creativity in acquiring language.  The essence of language is that you aren’t restricted to a fixed list of messages that you’ve memorized and then you regurgitate like a parrot; but rather you recreate . . . recombine elements to create new messages.  Every sentence that we utter is a brand new sentence, but it’s rather hard to study the process of kids making up new sentences.  When a kid says something like “sticked”, or “teared”, or “heared”, or “holded”, that’s a tiny example of recombination that I think is the engine that powers language as a whole.  The act of children making an error like that I think is a way of catching them in the act of doing something that makes language powerful, mainly combining things by rules.  And in trying to understand that one phenomenon, I hope that we – my students and I – shed light on the process of linguistic generativity or creativity in general.  I also try very hard to crack the code of what verbs means and how that influences how we use them in sentences.  The verb is, in a way, the chassis of the sentence.  Once you pick the verb, it’s got slots that the rest of the sentence is built around – the subject, the object, the indirect object, prepositional objects and so on.  So knowing how the verb works tells you a lot about how the sentence works.  And how the verb works depends on what the verb means.  You might think how could you ever get a handle on something as nebulous as what a verb means.  But I’d like to think that I cracked a lot of that code.  What’s the difference between a verb like “to fill”, and a verb like “to pour”, and a verb like “to load”?  They’re not just video images in the head of someone pouring, and filling, and loading, but rather they have an anatomy.  They’re built out of parts – parts like to cause, to move, means versus end, let versus cause.

Pinker:    I think the only way to make sense of nature and nurture is _______ obviously to point out that these are not alternatives; that you couldn’t have nurture – that is the creation and transmission of culture – without a rich system of emotion and learning to make sense of it; to create the culture; to acquire the culture if you’re faced with learning it as a child.  And in the other direction, it would be a pretty useless kind of innate human nature if it couldn’t take in information from the environment; if it couldn’t figure out the kind of physical and social world that it had been placed in; and soaked up information as to how to prosper in it.  In order to . . .  So you need both.  How do they interact?  Well you have to specify, I think, the innate motivational systems, the innate learning mechanisms that make learning and transmission of culture possible.  So something is innate.  What is innate is not concrete behaviors or chunks of knowledge.  What is innate is an ability to analyze the world and to learn in certain ways.  Language makes it concrete where we certainly could not possibly be born with English.  On the other hand, just an ability to learn generically isn’t enough because you could take a baby, or you could take a cat or a parrot, give them the same environment – the baby will learn to speak, the cat won’t.  So something innate must be there as well.  In the case of language, it would be a motive and an ability to analyze the signals coming out of someone else’s mouth as being formed out of units that have fixed meanings within a community and combinatorial rules that allow new ideas to be expressed by arranging these fixed signals in different orders and combinations.  The brain mechanism that is equipped to do that – to find the words, the nouns, the verbs, the phrases – to analyze speech as having that logic . . . that’s what’s innate, not just a generic ability to learn at one extreme, not knowledge of English at the other extreme.  What I basically try to do is understand human nature, how the mind works, what makes us tick.  What are the patterns of thought, and emotion and motivation that characterize our species?  I focus on language partly because you can’t make a living out of studying human nature.  It’s just too big a topic.  You’ve got to pick something tractable to study.  For me it has been language, and indeed for much of my career one little corner of language, namely regular and irregular verbs.  And I have my reasons for focusing on that particular corner. I think it sheds light on larger questions about what makes the mind work.  But language as a general topic is, I think, a good entrée into human nature for a number of reasons.  It’s distinctively human.  If you’re interested in general in what makes humans unlike mice and birds, language is a pretty good place to start not only because of language itself – the fact that we make noise with our mouths in order to get ideas across, but because language has to be fine tuned for the kinds of thoughts and the kinds of social relationships that humans want to share and negotiate with one another.  So it’s a window into human nature.  It’s also figured into debates on human nature, perhaps most famously with Chomsky in the late 1950s using language as a way to rehabilitate the idea of innate mental structure, something that was virtually taboo in the 1950s.  He said language was a very good candidate for something that is innately and uniquely human.  So it’s an opening wedge for the idea that important parts of the mind are innately structured.  It’s also a prime case of mental computation.  It’s very hard to make sense of language, of our ability to string words into new combinations, sentences that other people have never heard before but can very quickly understand for the first time without appealing to the idea that we have a mental algorithm, a set of rules, or a recipe or a formula that picks words out of a memory store and strings them together in combinations where the order, as well as the choice of words is meaningful.  So language sheds light on the idea that the mind is a computational system.