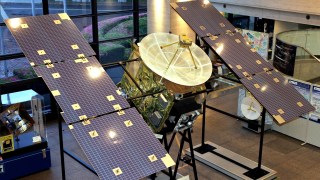 Get Ready for the Asteroid Gold Rush

Did you know there are several companies already in existence dedicated wholly to mining asteroids? What was once the topic of sci-fi has become the reality of our near future. According to author and entrepreneur Steven Kotler, the great asteroid gold rush will serve as a major economic engine for future growth. That’s because many of the rare elements and minerals on which we depend can be found in plentiful amounts floating through space, just waiting to be collected. History has taught us that heightened resource acquisition has led to massive waves of innovation and economic growth. Kotler believes we’re only a short span of time away from history repeating itself, this time on chunks of rock beyond the surface of the Earth.

Steven Kotler: We had the idea that we could mind asteroids for over a hundred years. Late 1800s is when we first started thinking about this in the first place. And today we have, I think it’s three or four different asteroid mining companies. It’s no longer an idea. We actually have companies that are actively pursuing this. And we also have really serious economic reasons for pursuing this, right. A lot of the metals, rare earth metals that we need to make all of our electronic gear are very scarce on Earth and totally plentiful in space. Gold, platinum — platinum is a fantastic conductor. We don’t build technology around it very much because all the platinum on Earth would essentially fit into the back of a flatbed truck, right. There’s a very limited supply. It is everywhere in space. So if you look at the history of the world, it’s always been the search for resources that has opened up new frontiers. It’s been the economic driver that has opened up new frontiers. Well that economic driver is there in space. And you have to think about it this way. If you go back 20 years ago, right, when Shell discovered the first North Sea oil deposit. It was beneath 5,000 feet of water, 10,000 feet of rock and they had to operate in this very cold, very hostile, very faraway environment robotically to get at oil. It was resource extraction. North Sea oil platforms are very, very expensive, but we learned. Shell was willing to take a very, very expensive bet to operate robotically in a very hostile distant far and away environment to get at resources, right. The same budget sort of applies to asteroid mining and it’s the same exact situation. It is a very faraway, very remote robotically extracted resource if we’re mining asteroids. So we’ve done this before. We’ve been down this exact road and for the first time in history we have the technology, right.

We’ve already been in three different missions already. Two out of NASA and one out of Japan that have caught up to asteroids. We even had one that — Hayabusa, which is the Japanese probe — scratched the surface and brought back some dust. It’s low-grade first step mining, right. So we already have proof of concept. We know it can be done. We know the resources are out there. And there are companies pursuing it. Will it happen in the next 20-25 years? The next 10 years? The next 20-25 or the next 50 years? I don’t know. If you talk to the people running the companies, they’ll put a 10- to 20-year time horizon on it. I think it’s a little farther out. But again, we’re going to see it sometime in the next 50 years. And you have to understand what this means. You know they did a study where they looked at the amount of gold contained in just a typical middle-of-the-road asteroid, not even like a metallic asteroid. Just a typical middle-of-the-road one and it was double what Fort Knox held at the height of Fort Knox, right. So there’s enough gold in one asteroid to kind of devalue every currency market on Earth. So that’s what’s coming and it’s really, really interesting, right. It sounds like this crazy science fiction technology but it’s going to have real-world economic impact on this planet within the century. And so we have to kind of be prepared for it at the same time that we’re thinking about it’s still science fiction.

Symmetry: How Einstein Changed the Way We See Everything