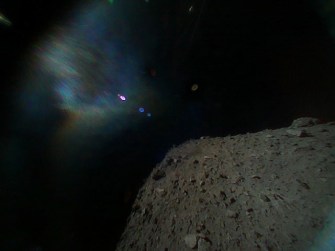 There is a lot of money floating around in space. Neil DeGrasse Tyson famously declared that the first trillionaire would be an asteroid miner (although Jeff Bezos is gunning for that position at the moment). Just to give a sense of the potential value out there, the value of Earth’s annual extracted metals and minerals is about $660 billion. Ryugu represents a large chunk of that, right? Well, there are far more valuable asteroids out there, too. In the asteroid belt, there is an asteroid named 16 Psyche that is worth an estimated $10,000 quadrillion. Let me write that number out: $10,000,000,000,000,000,000,000. That’s more than the value of everything produced on Earth in a year. Hell, according to one calculation, that’s 2,000 times more valuable than the Earth itself.

Like I said, there’s a lot of money floating around in space.

Currently, we don’t have the technology to access 16 Psyche and other insanely valuable asteroids like it. That’s why we’re sending small spacecraft to relatively small asteroids like Ryugu to get hard evidence about whether its worth the effort. It seems like the private sector has already made up its mind, however. 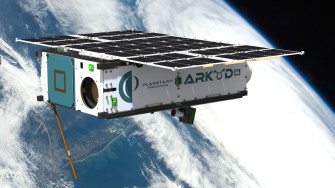 An artist’s rendering of the ARKYD-6 satellite, launched by Planetary Resources. The satellite is specifically tuned to search for water on near-Earth asteroids.

Asteroid mining has been likened to a space-age gold rush, only there’s a few crucial differences. First, gold is just one of the many valuable minerals we can expect to find. While gold is an important and valuable resource, what we really need are the many other minerals we can find in space. Most of the valuable minerals in the space dust that formed the Earth have been sucked into its core, locked away forever (unless we want to destroy the planet). What we mine today comes from the finite deposits of comets and meteorites that struck the planet’s surface over its history. Those materials will eventually run out, and, even if we get another “delivery” from outer space, it might render the whole economic endeavor moot. We need precious metals to build smartphones, but we also need living human beings to buy smartphones.

Second, regular people aren’t going to be able to pan for precious metals on the surface of an asteroid. There is a handful of corporations dedicated to asteroid mining operations, notably Planetary Resources. To date, the company has launched a couple of satellites that will survey likely candidates for mining from Earth’s orbit. Ultimately, however, their vision of asteroid mining will consist of sending out space probes, and developing fully automated mining and processing facilities on or near their target asteroid. They also plan to construct a fuel depot in space, where water extracted from asteroids can be split into hydrogen and liquid oxygen for jet fuel.

As stated earlier, today most of the mineral wealth on Earth comes from a finite supply delivered by comets and meteorites. Part of what makes these minerals valuable is the very fact that they are finite. What’s going to happen when a $10,000 quadrillion asteroid is mined for its resources?

Well, the short answer is we don’t really know. Once this science-fiction story becomes fact, it’s going to fundamentally transform our economies in ways we can’t really predict.

There is some concern that the vast amount of mineral wealth available in space will cause commodity prices to drop precipitously, tanking the economy. This likely won’t be an issue. Only a handful of companies will have a foothold in space, and because of their oligopoly, they won’t flood the market with, say, platinum. That would drive the value of platinum down so low that they couldn’t make any money. As an example of how this will likely play out, we can look at the diamond market. Diamonds are actually quite abundant on Earth, but the De Beers organization has such a monopoly on the market that they only release just enough diamonds to satisfy demand. Since the “supply” was artificially made to always meet demand, De Beers could ensure their continued profits. (Note that the De Beers monopoly has since been broken up).

So, the economy won’t collapse. But this also means that inequality on Earth will become more extreme. Right now, a handful of billionaires are betting on asteroid mining, and, if it pays off, they’re the ones who will reap the benefit. The rags-to-riches conditions of the gold rush aren’t going to be replicated out in space: there will be no Space Dream to match the California Dream.

On the other hand, mining operations will likely take place in space and correspondingly grow and develop in space. As more mineral resources are found in space and less on Earth, mining operations here won’t be as appealing, which is a profoundly good thing. Mining is incredibly damaging to the environment, and in developing countries, mines are often worked by child labor. On a theoretical asteroid mining operation, most of the work would likely be automated, and any pollutants would be shot off into outer space.

The most optimistic perspective on asteroid mining is that it will propel us towards a post-scarcity society, one where the incredible abundance of water and minerals and asteroids will enable virtually limitless development. Gathering water from asteroids, in particular, would represent a tremendous boon. Unfortunately, selling water to thirsty humans isn’t likely what’s going to happen; instead, it’ll be used to make rocket fuel for further asteroid mining ventures.

Tags
Engineeringfutureinvestmentminingnasascience fictionwater
In this article
Engineeringfutureinvestmentminingnasascience fictionwater
Related
The Well
A futurist sets the stage for the next 1,000 years
We don’t need one Elon Musk. We need 8 billion empathic futurists.
▸
8 min
—
with
Ari Wallach
Hard Science
Cracking a mystery about Vesta, our solar system’s second largest asteroid
How did the troughs form?
Hard Science
Earth’s first puff of oxygen may be thanks to volcanoes
Scientists track down a puzzling early burst of oxygen on Earth.
The Present
MIT engineers design touch-sensing glove that ‘feels’ pressure and maps stimuli
The design could help restore motor function after stroke, enhance virtual gaming experiences.
The Present
Spending money on new infrastructure isn’t always the best idea
The questions about which massive structures to build, and where, are actually very hard to answer. Infrastructure is always about the future: It takes years to construct, and lasts for years beyond that.
Up Next
High Culture
Banned books: 10 of the most-challenged books in America
America isn’t immune to attempts to remove books from libraries and schools, here are ten frequent targets and why you ought to go check them out.