Would you like to be a billionaire? All you have to do is figure out how to go into space and mine 16 Psyche, an asteroid made of gold and other metals like iron and nickel. Flying somewhere between Mars and Jupiter, this amazing space rock is estimated to be worth as much as $700 quintillion, thanks to all the metals it contains.

Quintillion, if you are wondering, is 1 with 18 zeroes. It’s such a large amount of money that if you divide it up between everyone alive on Earth currently, each person would get about $93 billion.

Of course, don’t pack your bags for your new palace just yet – the prospect of actually getting such a giant chunk of precious metals back to Earth is difficult and hasn’t been accomplished yet even on much smaller scales. And 16 Psyche is a truly massive space rock at over 200 km (120 mi) in diameter. It is one of the largest asteroids flying in the asteroid belt.

Experts, like Professor Zarnecki of the Royal Astronomical Society, conjecture we may be up to 50 years away from being able to carry out commercial mining operations of that size. To start things off, NASA is planning to send a Discovery Mission to the asteroid in 2022, which will arrive there by 2026.

Some skeptics also don’t believe the asteroid is as full of expensive things as we think, with Peter Schiff of Euro Pacific Capital tweeting that 16 Psyche may just be “made almost entirely of an iron-nickel alloy, with small amounts of other metals, likely to include gold.” He thinks the news about the asteroid are just out there to help bitcoin, which would benefit from the price of gold going down.

There are also other questions to consider – if it really is so full of gold and other riches, the asteroid could actually crash Earth’s economy, which at $75.5 trillion is a pittance against the amount of money one could get from the asteroid. 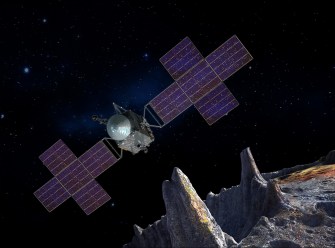 Artist’s conceptual drawing of the Psyche spacecraft, which will be used to directly explore 16 Psyche.

Veteran miner Scott Moore, CEO of the mining company EuroSun Mining, explained to Oil Price that: “The ‘Titans of Gold’ now control hundreds of the best-producing properties around the world, but the 4-5 million ounces of gold they bring to the market every year pales in comparison to the conquests available in space.”

Of course, the thinking that a space gold rush that discovers a vast amount of heavy metals could bring down Earth’s affairs is based on the current state of economy and the needs of the present day. Decades from now our requirements for metal might be entirely different.

16 Psyche was actually discovered back in 1852 by the Italian astronomer Annibale de Gasparis, and named after the Greek mythological character Psyche.

Besides this giant rock in the asteroid belt, there are other mining opportunities much closer to Earth. Moore points out that while Psyche “may be the Holy Grail of space exploration for gold,” near-Earth asteroids are much better first targets for mining. Even our moon might be a better place to start such operations. It also has gold as well as platinum and other rare earth metals.

In other nearer goals, Deep Space Industries and Planetary Resources each plan to mine the 2011 UW158 asteroid, worth up to $5.7 trillion.

Lest you think this is all science fiction, Morgan Stanley projects the global space economy to be already worth $350 billion, which it thinks will grow to trillions by 2040. The race is on between the U.S., China, Japan and even small Luxembourg, which has 10 space-mining companies registered.

Why is NASA sending a spacecraft to a metal world? – Linda T. Elkins-Tanton

Why is NASA sending a spacecraft to a metal world? – Linda T. Elkins-Tanton

Sitting is the new smoking, but not all types of sitting are made equal

A new study has bad news for those who binge watch TV.