Want to go to Mars? It will cost you. In 2016, SpaceX founder Elon Musk estimated that manned missions to the planet may cost approximately $10 billion per person. As with any expensive endeavor, it is inevitable that sufficient returns on investment will be needed in order to sustain human presence on Mars. So, what’s underneath all that red dust?

Were a SpaceX-like company to establish a commercial mining presence on the planet, digging up these materials will be sure to provoke a fraught debate over environmental preservation in space, Martian land rights, and the slew of microbial unknowns which Martian soil may bring.

Given the rate of consumption of minerals on Earth, there is plenty of reason to believe that there will be demand for such an operation.

“Almost all of the easily mined gold, silver, copper, tin, zinc, antimony, and phosphorus we can mine on Earth may be gone within one hundred years” writes Stephen Petranek, author of How We’ll Live on Mars, which Nat Geo’s MARS is based on. That grim scenario will require either a massive rethinking of how we consume metals on earth, or supplementation from another source.

Elon Musk, founder of SpaceX, told Petranek that even if all of Earth’s metals were exhausted, it is unlikely that Martian materials could become an economically feasible supplement due to the high cost of fuel required to return the materials to Earth. “Anything transported with atoms would have to be incredibly valuable on a weight basis.”

Actually, we’ve already done some of this kind of resource extraction. During NASA’s Apollo missions to the Moon, astronauts used simple steel tools to collect about 842 pounds of moon rocks over six missions. Due to the high cost of those missions, the Moon rocks are now highly valuable on Earth. 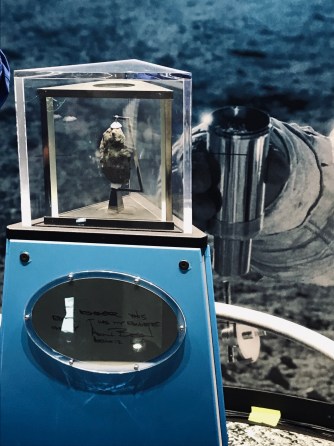 In 1973, NASA valuated moon rocks at $50,800 per gram –– or over $300,000 today when adjusted for inflation. That figure doesn’t reflect the value of the natural resources within the rock, but rather the cost of their extraction.

Assuming that Martian mining would be done with the purpose of bringing materials back to Earth, the cost of any materials mined from Mars would need to include both the cost of the extraction and the value of the materials themselves. Factoring in the price of fuel and the difficulties of returning a Martian lander to Earth, this figure may be entirely cost prohibitive.

What seems more likely, says Musk, is for the Martian resources to stay on the Red Planet to be used for construction and manufacturing within manned colonies, or to be used to support further mining missions of the mineral-rich asteroid belt between Mars and Jupiter.

At the very least, mining on Mars has already produced great entertainment value on Earth: tune into Season 2 of MARS on National Geographic Channel.

Trolls undermine the credibility of authors and publications, researchers say

The impact of abusive comments is “significant.”