Tim O'Brien is an American novelist. His books include the National Book Award-winning "Going After Cacciato" (1978), as well as his debut novel, "If I Die in a Combat Zone,[…]
Go to Profile 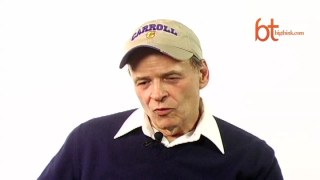 How U.S. Soldiers Have Changed Since Vietnam

The author and former veteran sees none of his generation’s “edgy,” questioning attitude in the modern military.

Question: What’s different about the rnAmerican soldier’srnexperience now as opposed to when you served?

Tim O’Brien: Well, one of the huge things, rnof course, isrnthere’s no draft and the people that are fighting are in the armed rnforces outrnof volition or of their own will, decisions.  And rnthat’s pretty huge.  It attracts a certain rntemperament that wasn’t mine.  A kind of “can-do,”rn macho, adventurous temperament.  Andrnpatriotism feeds in very strongly as well.  That’srn a pretty big difference from the people who went tornfight; I mean there were many volunteers, of course, that went to rnVietnam.  But the bulk of us were draftees whornprobably more or less went reluctantly. rnAnd in my case, a lot more than less.  And rnso the two wars are being fought by American soldiers onrneach side of pretty different temperaments.

I, for example, did an article for a big magazine, rnwhere I wasrnsent to Brook Army Medical Center in San Antonio, where the terrible rnamputeesrnare sent and the burn victims.  AndrnI felt great compassion for these young men and one young woman.  But out of their mouths, there was nonernof the irony that accompanied the war from my generation. rn There’s no questioning of the rectitudernof the war whatsoever.  It wasrnjust—it wasn’t even thought about as far as I could tell. rn In fact, in response to my question, dornyou ever wonder about there were no weapons of mass destruction?  Did that bother you?  And the rnanswer was uniformly fromrnmany, many mouths, a flat, “No.  Itrndoesn’t bother me. I don’t evenrnthink about it.”  But even thern“don’t think about it” wasn’t there. rnIt was just, “No, it doesn’t bother me.”

There was none of the edgy feel of questioning or rnambiguity,rnor that certainty thing we began with, was there in those young people.  And these were horribly maimedrnpeople.  Horribly wounded.  But,rn instead coming out of their mouthsrnwere words such as, “wounded warrior,” and “war against global terror,” rnand itrnwas kind of military sloganeering. rnIt was part of who they were. rnAnd that was another one of the differences from my time.  One of the odd things, I guess, one of the great rnironies isrnthat “The Things They Carried” as a book is one of the things being rncarriedrnaround Iraq and Afghanistan and finding out that book is passed around rnfromrnsoldier to soldier, which gives me a little hope that they’re getting rnsomethingrnfrom another point of view, which is mine.  And rnthat’s good for me.

What We Still Don’t Get About Vietnam