Greenland’s ice: A trip back in time to see the future of climate change

There are clues to the future and past trapped in Greenland's ice.

Jon Gertner
Jon Gertner is a journalist and historian whose stories on science, technology, and nature have appeared in a host of national magazines. Since 2003 he has worked mainly as a feature writer for the New York Times Magazine. His first book, The Idea Factory: Bell Labs and the Great Age of American Innovation, was a New York Times bestseller.
22 June, 2019

JON GERTNER: It's hard for us here to imagine what the Greenland ice sheet is like. This is thousands of miles from the United States, as well as from Europe. It's a country that few people ever visit; it's a flyover -- maybe when you're going to Northern Europe you see this vast ice sheet. And Greenland's ice sheet, you might just imagine kind of a cupcake where the icing doesn't quite go to the edges. I mean, not only is Greenland the world's largest island, but this ice sheet, which is about 1,500 miles long and 700 miles across, covers well over 80% of the island. So there's really only this narrow strip of land around the edges that have been hospitable to settlements. Because nothing really lives on the ice sheet. This is a place where frozen temperatures get down as low as minus 80 degrees fahrenheit. It's a place that was considered forsaken by the native Inuit, a place that was somewhere you would stay away from, where evil spirits dwelled.

And it was also a place that in its center -- if you consider this kind of icing on the cupcake, in the center it's 10,000 feet high. So it's this kind of giant dome of ice, and it's two miles thick. One scientist I spent a lot of time with in Greenland called it the world's largest laboratory. Which is a kind of strange phrase when you think of it as the world's largest island, and it's covered in ice. Well, why is that? But if you look back in the history it sort of offered this opportunity for the study of the one remaining ice sheet in the northern hemisphere; the other is down south in Antarctica. But it also offered some of those early scientists a way to look back in time. Because ice, in the words of a lot of scientists, is depositional. It creates a kind of record of all the deposits that fell on it through snow. And we think, OK, well it has old snow. But it's more than that. It actually holds ancient gases. It contains records from ancient volcanic eruptions. And the way we began to access that information, because it really is information, was to drill into the ice.

And the first people to do this in a significant way, they weren't actually drilling into the ice. There was this guy Ernst Sorge, who was stationed with Alfred Wegener's team in the center of the ice sheet in 1930. And he began, literally, he was camped out under the ice with another guy -- two other guys, actually -- and he began to literally dig down with a shovel. He dug a staircase into the ice. He dug about 50 meters -- 50 feet, excuse me, down into the ice. And he began to carve out blocks and bring them back up to where they were sleeping, and he would measure them on a scale. And he wanted to measure their density. And what he discerned was that there was a very kind of discernible variation between wintertime-density snow and summertime. And he could, by doing this, sort figure out exactly how many years back in time he was going. So that was the big first step. OK, you can actually measure these sort of stripes in the ice, if you think of it that way, by kind of going down deep. And after that it became much more ambitious.

In the 1950s and 1960s scientists really brought drilling rigs up there. They tried to figure out how you could kind of drill down and pull up a core, which might sound easier than you think, but it's actually quite hard because you want to retain the pristine nature of the ice. Because what you really want to do is all sorts of experiments on chemical analysis to try and understand the isotopes in the ice. And these are kind of keys to understand what ancient temperatures are like. There are also these ancient bubbles trapped in ice, and they're keys to ancient atmospheres, too. So the farther down you go, the farther back in time you go.

And we could say, well, OK, so big deal. You can figure out maybe what the temperatures were like 1,000 years ago. But that's not a trivial piece of information. Because it's not just telling us what temperatures are like, it's telling us maybe what changed. It explains pieces of history that we might not understand. It could explain, for instance, why the Greenland Norse who came to Greenland 1,000 years ago and then mysteriously died out, why did they go? Was there a dramatic temperature change? It could explain, for instance, what happened to the Earth about 11,000 or 12,000 years ago, when we see these dramatic shifts in temperature that happened really in the space of 10 or 15 years that make us ask now, gee. We always think of climate as changing sort of gradually and slowly, but actually history, as we figured out from these ice cores, shows us that climate can actually change pretty quickly, and the Earth doesn't really care about changing slowly. Sometimes it has different modes that it can just rapidly switch into.

So there's all sorts of information that we've found out from the center of Greenland's ice. It's kind of a key to the past. Sometimes it's not always reassuring, but it's always given us new knowledge that helps us think, again, about this place as a big laboratory, and not just a big hunk of ice. 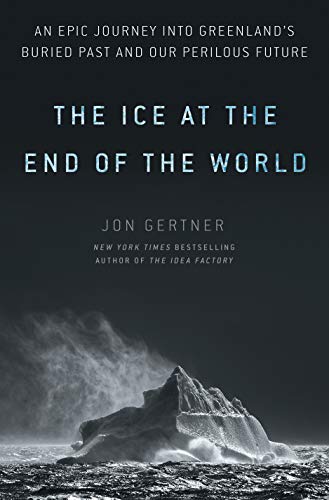