Insects might often seem like a nuisance, yet life on this planet would be impossible without them. Sure, mosquitoes kill more humans every year than any other animal, but there’s a trade-off when it comes to such invertebrates: without pollinators, we wouldn’t be able to survive. And while Americans might scoff at the idea, insects are a food source for four-fifths of the planet (and Americans really should consider this route).

Speaking of 80 percent, that was the same percentage of one 2016 study regarding European insect collapse. More recent research has found that 40 percent of insect populations are in decline; one-third is in danger of extinction. On the face that sounds like more enjoyable summers until you realize that, for humans at least, the trend could result in no more summers at all. As two Australian researchers phrase it,

“Unless we change our ways of producing food, insects as a whole will go down the path of extinction in a few decades. The repercussions this will have for the planet’s ecosystems are catastrophic to say the least.”

Pesticides have long been identified as a driver of insect collapse. They’re not the only agricultural problem, however. In fact, as a new study (published in Science) shows, the thousand little cuts that have led to climate change are driving extinction—especially, in this case, of monarch butterflies.

Insect ecologists Art Shapiro and Matthew Forister looked at 450 butterfly species at 70 different locations in the western United States. While butterfly numbers have been dropping regularly since 1977 at a rate of 1.6 percent every year, the trend seems to be increasing. Just last month, a disturbing report from Mexico found that the hibernating population of monarchs has decreased by 26 percent since 2019, predominantly due to deforestation and drought— factors helping drive or due to climate change. 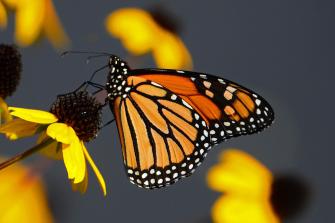 While problematic, human development and pesticides have nowhere near the impact of warming autumns. Fall temperatures have outpaced summer increases for years, disrupting butterfly breeding patterns and the life cycles of the plants they depend on.

Fewer butterflies aren’t just an aesthetic problem. Forister notes that the loss of these key pollinators could cause an ecosystem collapse in the coming years. Hotter falls also negatively impact bee populations. Recent colony collapses in Colombia are likely the result of monocropping avocados and citrus.

The enormity of this problem cannot be overstated. Insects fertilize for us—three-quarters of all crops across the globe. According to a 2016 study, 1.4 billion jobs depend on pollinators. With the loss of insects, our food supply (and a giant economic driver of society) goes with them.

Regional efforts to save monarch butterflies are underway. Tribal organizations in Oklahoma are trying to replant milkweed—often viewed as a pest by farmers—to boost butterfly populations. The Tribal Alliance for Pollinators (TEAM) has secured nearly a quarter-million dollars in the last three years to plant milkweed and nectar plants to help the annual butterfly migration to Mexico.

The road ahead will not be easy. Until legislative measures are enforced to curb climate change, seasons will continue to be unpredictable: warmer autumns, colder winters, especially in places unaccustomed to such drastic changes in temperature—last month’s storms in Texas provide a cautionary tale. Yet we’ve had many such tales at this point. With the loss of insects, there won’t be any more stories left to be told.

Tags
Agricultureanimalsclimate changeearth scienceenvironmentHard Sciencepublic healthsocietyThe Presentweather
In this article
Agricultureanimalsclimate changeearth scienceenvironmentHard Sciencepublic healthsocietyThe Presentweather
Related
Life
Strange life forms create an “alien” ecosystem in an abandoned uranium mine
Slimy biofilms made up of bacterial and eukaryotic life forms have taken over an abandoned, flooded uranium mine in Germany.
Hard Science
Earth has an eerie “sodium glow,” and astronomers use it to image stars
Air currents in our atmosphere limit the resolving power of giant telescopes, but computers and artificial stars can sharpen the blur.
The Present
Climate change is altering the chemistry of wine
Smoke taint from wildfires is gross, even to wine amateurs.
Life
Our antidepressant drugs are affecting animals and ecosystems
A toxicologist explains the impacts of antidepressants on fish — and no, they’re not getting any happier.
Thinking
Visual thinking: How to understand the inner lives of animals
Humans are good visual thinkers, too, but we tend to privilege verbal thinking.
Up Next
Starts With A Bang
No, Today’s Stars Are Not The Same As Yesterday’s Stars
The Universe’s idea of a ‘typical star’ has changed dramatically over time.When you look out at the Universe today, you’re not seeing it exactly as it is at one particular instant […]