Discussions of the climate crisis tend to view future consequences on a global scale. Hot and more acidic oceans will lead to coral death and species die-offs. Increased growing seasons and less snowpack will stress watersheds. Acts of God (or Mother Nature) such as droughts, hurricanes, and forest fires will become alarmingly frequent parts of our annual routines.

Even when we turn our attention to the human toll, our focus can be statistically stoic. Effects like large-scale human migration, interstate competition for resources, and degradation of habitable land are terrifying, but from our contemporary vantage, they too easily read like local news from several states over. Horrible but distant.

But a recent study in Environmental Research Letters has narrowed the focus. It shows that an increase in global temperatures by 2°C will affect everyone, neighbors and friends, whose job takes them outside. 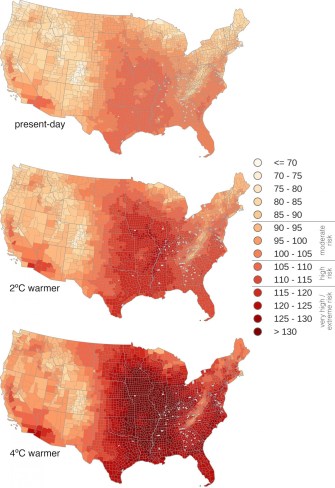 Three maps showing the maximum daily heat index, in Fahrenheit, for the top 5% of the hottest days in the growing season.

Turning up the heat index

The study’s authors spotlighted how the climate crisis will transform agricultural work. They chose agriculture not only because its workers are essential, but because few studies had looked at the men and women who support this economic cornerstone.

“Studies of climate change and agriculture have traditionally focused on crop yield projections, especially staple crops like corn and wheat,” Michelle Tigchelaar, the study’s lead author and a postdoctoral researcher at Stanford University, said in a release. “This study asks what global warming means for the health of agricultural workers picking fruits and vegetables.”

The researchers obtained employment data from the Bureau of Labor Statistics’ (BLS) Quarterly Census of Employment and Wages program and used it to determine the number of workers in the America’s agricultural counties during the growing season (May through September).

They then compared that data to models of climate change, using “business-as-usual scenarios” in which carbon emissions neither increase nor decrease drastically in the coming years. According to these conservative models, global temperatures are projected to increase by 2°C (~36°F) by 2050 and 4°C (~39°F) by 2100.

Their use of the heat index is critical as climate change won’t only increase the planet’s temperature. It will increase global humidity, too.

Typically, our bodies perspire to cool down. On dry summer days, sweat evaporates from our skin to transfer our metabolic heat into the air around us. But when humidity rises, sweat evaporates much slower as the surrounding air is thick with water.

Because of this, humid days don’t just feel hotter. According to our bodies, humid days are hotter. We experience an 88°F day with 85 percent humidity as though it were a stifling 110°F.

Exposure to such heat can cause illnesses such as sunburn, heat cramps, and heat exhaustion. If a person’s temperature reaches 103°F or higher, they may suffer from heatstroke which can result in headaches, nausea, fatigue, confusion, loss of consciousness, and even death.

Chronic overheating has been correlated with stress-related heart, kidney, and liver damage, though studies have not shown conclusive causation.

When global temperatures rise by two degrees, according to the study, the average agricultural worker will face 39 days of heat that exceed safety standards. At four degrees warming, that number grows to 62 days. Their data also show that heatwaves—defined as a three-or-more-day stretches of extreme heat—will become five times as frequent by 2050.

“The climate science community has long been pointing to the global south, the developing countries, as places that will be disproportionately affected by climate change,” David Battisti, co-author and a UW professor of atmospheric sciences, said in the same release. “This shows that you don’t have to go to the global south to find people who will get hurt with even modest amounts of global warming — you just have to look in our own backyard.”

It’s worth noting that those numbers are averages, and agricultural workers in different locations will encounter drastically different conditions.

For example, the study’s data show counties in Washington state remaining on the cooler side of the median. Meanwhile, workers in Imperial, California already contend with 105 days that exceed safety standards. By the year 2100, that number will jump to 136—nearly the entire growing season! 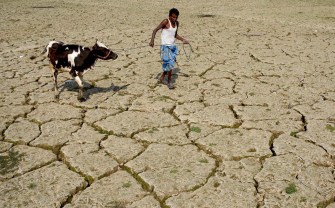 The costs will be global

Heat-related illnesses are a concern for all outdoor workers, but agriculture workers are particularly vulnerable as they typically lack health insurance and have low incomes.

But these recommendations come with trade-offs. Breathable clothing is not an option when personal protective gear is necessary to protect workers from dust, pesticides, and UV radiation, and the slower pace would hurt productivity and, as a consequence, worker’s already low pay.

According to Patrick Behrer, an environmental and developmental economist and Harvard Ph.D. candidate in the Graduate School of Arts and Scienceswho was not involved in the research, the relationship between heat and pay will take its toll on workers:

“Relative to the other damages of climate change, the impact of any given hot day is small, both in absolute and relative terms; some of our other work suggests that just one additional hot day removes a fraction of a percent of your annual take-home pay. When you start talking about going from eight extremely hot days to 50 extremely hot days, then that adds up very quickly. It also adds up very quickly when you’re taking a fraction of a percent of pay away from large parts of the United States.”

Of the U.S.’s most fatal occupations, eight of the nine are either performed outdoors or in environments that make heat-regulation difficult to manage, such as iron and steel-working. Without proper preparation, it isn’t difficult to imagine how fatigue, confusion, and other heat-related symptoms may exacerbate dangerous conditions for these essential workers.

And it is not only workers. By one study’s estimate, the billions of people worldwide who can’t afford air conditioning will be at risk—any one of which may be a friend, neighbor, or essential member of society much closer than the next state over.

Here’s what it means for the field.
Up Next
Starts With A Bang

This image is a composite of the Ring Nebula (Messier 57). This combines new Hubble Wide Field Camera 3 data with observations of the nebula’s outer halo from the Large […]