Of all the projects aiming to make the world more sustainable, none is less appealing than toilet to tap, a water recycling process where wastewater is converted into potable water.

But despite the gross-out factor, a handful of governments have already invested in the technology, including those in Singapore, South Africa, Belgium, California, and Texas. Soon, others may have few other options. El Paso is leading the way.

The case for drinking treated wastewater. (Yes, from the toilet.) | Just Might Work by Freethinkwww.youtube.com

Depletion of resources and climate change are threatening to dry up parts of the global water supply. By the late 21st century, the number of people impacted by extreme droughts is projected to double, a shortage that would not only affect the health of millions of people but also potentially create catastrophic socioeconomic problems and geopolitical conflicts.

The U.S. is already feeling the heat. In May, California declared a drought emergency in 39 counties. It wasn’t really a shock to the state, which has endured severe droughts over the 20th century, including a historical five-year drought from 2012 to 2016.The U.S. Forest Service has warned that droughts like these could render half of the nation’s freshwater basins unable to consistently meet monthly water demand by 2071.

The causes are twofold. One is a growing population that will demand more water. The other is that global warming is evaporating more water from soil, lakes, reservoirs, and rivers, while climate change alters patterns of precipitation and snowmelt, which feed the rivers and lakes from which we get much of our drinking water.

Facing a dry future, some municipalities have accepted the crappy-sounding reality: Converting sewage water into drinking water through water recycling may be the best way to prevent a crisis.

The average adult flushes about 320 pounds of poop down the toilet every year. Where does it all go?

When you flush your toilet, the water swirls through a U-shaped pipe, called a trap, that prevents sewage gases from entering your home. That toilet water — along with other wastewater from your sinks, washer, and shower — flows into a sewer line, which is connected to the buildings and homes in the immediate area. These sewer lines can be big. In New York City, for example, combined sewer lines can span more than 12 feet wide, enough space for a subway car.

These pipes carry wastewater to municipal water treatment plants for cleaning. In the U.S., the water treating process typically involves steps like:

After wastewater is treated and deemed clean enough for the environment, it’s used for crop irrigation, or it’s discharged back into streams, rivers, and lakes. But some municipalities take water reclamation several steps further, purifying wastewater to the point where it’s safe to drink. 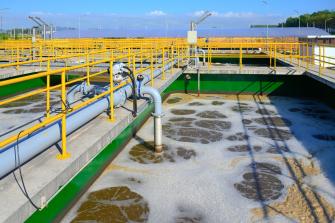 Today, drinking water in places like Northern Virginia, Phoenix, and Southern California is, at least in part, reclaimed wastewater. But in some parts of the U.S., climate change poses such a severe threat to the water supply that more drastic measures are required.

El Paso, Texas, is an exceptionally dry city. Located in the Chihuahuan Desert where only nine inches of rain falls per year, it’s drier than some parts of sub-Saharan Africa. The city has historically received half of its water supply from the Rio Grande, but the river has been steadily drying up, forcing officials to turn to other solutions, like building the nation’s largest inland desalination plant and establishing incentives that encourage residents to use less water.

In recent years, El Paso has been working on what officials call the next logical step: Creating a closed-loop water recycling system that purifies wastewater and sends it right back into the drinking water supply.

El Paso and other U.S. cities already clean wastewater and pump it back into the aquifer, an underground layer of rock. But while this water reclamation process is environmentally safe, it can take years for the recycled water to make its way back into the drinking supply. A closed-loop system would speed things up.

The process will begin at El Paso’s conventional water treatment facility, which cleans water according to long-established standards. But then the water will be piped nearby to the city’s Advanced Water Purification Facility to undergo several additional cleaning steps:

As El Paso’s reclaimed water goes through these additional purification stages, technicians at El Paso Water will monitor the water in real-time to ensure it meets safety standards.

“The water we’re going to produce out of the Advanced Water Purification plant is the safest water that could be produced through treatment processes these days,” Gilbert Trejo, EPWater’s chief technician officer, told Freethink.

Freethink recently visited El Paso Water to get an up-close look at what is set to be the first closed-loop water recycling system in a major U.S. city. (See video above.)

In addition to cleaner water, water recycling facilities like El Paso’s would also be cheaper and more practical than solutions like desalination. After all, not every city lives close to the ocean, and even those that do have to pay to transport saltwater to the treatment plants. But practical benefits aside, toilet to tap is tough to sell to the public.

The prospect of drinking recycled water unsurprisingly elicits a disgust response in many people, some more so than others. A 2015 survey of more than 2,000 U.S. residents across the nation found that: “Approximately 13% of our adult American sample definitely refuses to try recycled water, while 49% are willing to try it, with 38% uncertain,” the researchers wrote. “Both disgust and contamination sensitivity predict resistance to consumption of recycled water.”

For a minority of people, it seems no amount of purification through technical means will render the water potable. That’s because of “spiritual contagion,” which the researchers said is “conceived of in terms of the entrance into the target of some spiritual essence which does not resemble standard physical entities. It does not respond to washing, boiling or filtering, but remains as a permanent essence.”

But even though water reclamation is generally unpopular, and some people may always resist it, research suggests that people become more accepting of water recycling as they learn more about the process.

That’s why El Paso has aimed to be transparent and proactive in explaining the process to residents through public outreach programs. In 2016, nearly 90 percent of El Pasoans supported the idea of producing more drinking water through the city’s Advanced Water Purification Facility.

“I think it’s very exciting for El Pasoans to know that what we’re doing here in El Paso is going to change the water industry. The engineering community and the water community knows and understands that these treatment processes treat the water and produce a very high-quality water. It’s a matter of which community is going to be the first one to have absolute trust in their water utility, and in the water, and that’s what we’re about to do here in El Paso.

The holograms use 'aerohaptics', which creates feelings of touch with simple jets of air.
Up Next
The Future

10 emerging technologies that will change our world

The revolution is already happening.