Skip to content
Who's in the Video
Ethan Hawke
Ethan Hawke is an American actor, novelist, screenwriter, and director. Hawke received Academy Award and Screen Actors Guild Supporting Actor nominations for his work in Antoine Fuqua's "Training Day," opposite[…]
Go to Profile
Videos
Ethan Hawke: Success Is as Simple as Setting Achievable Goals
As an actor, director, screenwriter, and novelist, Ethan Hawke knows how to get things done. The secret to his success is taking small, progressive steps to a larger goal. It's just that simple.
▸
4 min
—
with
Ethan Hawke

Although Ethan Hawke is a novelist, he says writing a novel has never been a personal goal. His comment is not a falsely modest one. Rather it comes from a feeling of genuine intimidation before the task of writing a book-length manuscript. As a famous poet once said, our ends never know our beginnings, and in the case of achieving our goals, this might be a good thing.

The idea of taking baby steps through a project is cliche enough to be virtually meaningless. As a way through that impasse, Hawke discusses some real life examples of when setting small goals has allowed him to achieve greater success. Before he ever dreamed of writing a novel, he took a retreat to simply write for ten days in a row. The goal? One short story. After acting in Dead Poets Society, Hawke decided to do some directing. Instead of directing a feature-length film, he chose a short documentary.

The key, says Hawke, is not setting yourself up for failure. Whatever your medium is, whether banking reports or epic poetry, you must set achievable goals for yourself, despite whatever grandiose wishes you have. Setting impossible goals will result in failure, and failure, says Hawke, is just depressing. One of the greatest motivators in Hawke’s writing endeavors was the praise of his friends, so receiving positive feedback for your work is essential. Positive feedback comes from inside and outside, and both depend on setting goals that are realistic.

Ethan Hawke’s graphic novel is Indeh: The Story of the Apache Wars. 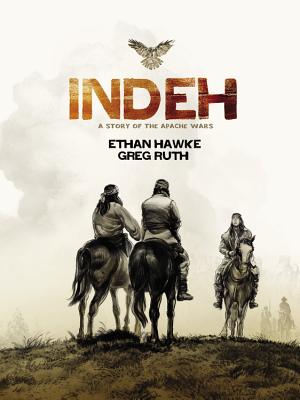 Ethan Hawke:  I have thrived on one simple idea which his placing achievable goals in front of you. I never would give myself a goal like writing a novel. I find goals like that really intimidating. I do well by saying I’m going to try and write every day for ten days. I remember when I was first starting to teach myself to write. I would say I’m going to go away for ten days. I’ll go on a ten day retreat and I’ll write every day for ten days with the goal of one short story. Let’s see if we can just – I’m going to come back with one short story I can hand to my friends. And usually those simple actions give you confidence. I did that. I wrote a short story and I gave it to my friends and they really liked it. I mean they’re my friends, right. And they were encouraging. I knew that there were a couple of paragraphs that were really good. You know when you start accessing that part of yourself and you give yourself achievable goals – I remember I didn’t decide that I wanted to direct films. I told myself that I was going to direct a short film and I was going to make it super manageable, something that I could afford to produce. I didn’t need to ask anybody. I took the money I made from Dead Poet’s Society and I made a short film.

You know, I’ve got a graphic novel coming out. That’s kind of weird, you know, for an actor to do. I made a documentary last year. I wrote a children’s book last year. I’ve acted in plays. To a lot of people that strikes them as weird. Or they can accuse me of being a dilettante or something like that, right. But I believe in cultivating the attitude of a student at all times and putting yourself out of your comfort zone. You know if all I did was act since I was 13 I could do that but it doesn’t help me become a better actor. Writing helps me become a better actor. Directing, you know, I’m trying to direct a movie right now. I’m trying to talk other actors into being in the movie and they say no all the time the bastards. And but it helps me understand wow, that’s how she works. I would have never thought that about the script. You know what? She’s right. It is strange. Why does that do that? Now when I’m meeting a director who is trying to talk me into doing a movie I know how sensitive they’re feeling, you know, and I know how to talk to them in a way that’s not going to be hurtful or disrespectful.

I have had a lot of experience in different things and, you know, I’ll give myself a goal of a first draft of something with plenty of time. But you have to make it. If you give yourself achievable – the great thing is you don’t want to position yourself to fail because failing is depressing and it makes you lose steam. Whereas if you say like I don’t have to direct a movie by next year or anything like that but I will have a first draft or I’ll die. I’m going to have this first draft. And so what do I really need to do that? Well I need to have an outline by next week and then I’ll make that outline into a ten page treatment. I’ll turn that ten page treatment into a 20 page treatment. Then I’ll try to write a first draft of a screenplay with my goal of it being 60 pages. And like that. And okay. Invariably often you can get done sooner than that.

Up Next
Is Penn Jillette the World’s First Praying Atheist?
▸
7 min
—
with
Penn Jillette
Related
13.8
The weirdness of quantum mechanics forces scientists to confront philosophy
Though quantum mechanics is an incredibly successful theory, nobody knows what it means. Scientists now must confront its philosophical implications.
Neuropsych
Why is a Starbucks loyalty rewards program making customers so angry?
The rewards price to get a free cup of hot coffee at Starbucks is going up.
Empowering growth
7 essential management training topics for every team leader
From emotional intelligence to problem solving, these management training topics will set team leaders up for success.
Thinking
What if you could rewire your brain to conquer suffering? Buddhism says you can
For Buddhists, the “Four Noble Truths” offer a path to lasting happiness.
Hard Science
Solved: 500-year-old mystery about bubbles that puzzled Leonardo da Vinci
The solution involves the infamous Navier-Stokes equations, which are so difficult, there is a $1-million prize for solving them.