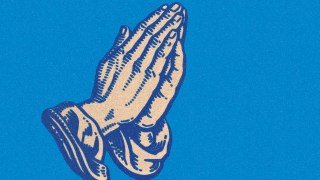 Right before he goes to sleep every night, staunch atheist Penn Jillette does something surprising. He says a little prayer – sort of.
▸
7 min
—
with
Penn Jillette

Right before he goes to sleep every night, staunch atheist Penn Jillette does something surprising. He says a little prayer – sort of. It’s called ‘Penn’s Guilt Round Up’ and it’s where he reflects on all the things throughout the day that he regrets, or wonders if he should have done and how they affected people. Then he moves on to thinking about what he wants in life and how he can get there. Before he made 100 pounds disappear from around his middle (hey presto!), he used to think, frustrated and longingly, about having the discipline to lose weight, to tell that slice(s) of pizza to talk to the hand because the face (with glowing skin and no chin) ain’t listening.

Out of respect for people who use prayer authentically to reach a higher power, Jillette is very hesitant to use the word ‘prayer’ to describe his own ritual, but he questions whether atheists (and society as a broader effect) might benefit from a certain kind of placebo prayer. It’s a provocative question: if you’re certain that there is no God, is it okay to talk to an imaginary one for the sake of catharsis and self-reflection? Jillette anticipates that many people on all sides will disagree with that idea strongly, but he references the powerful placebo effect – it could be harnessed by atheists as a ritual to explore themselves and their awareness in the world. We all have incessant mind chatter and some of us occasionally speak out loud to ourselves when we’re alone, but perhaps for atheists speaking aloud to a fictitious God of their choice might yield a greatly improved mental clarity, and a kinder, more compassionate perspective.

It’s a curious case for Jillette; when people give up religion, he cautions that they shouldn’t throw the baby out with the bathwater. The non-religious have the same social needs as believers – the need for communal gathering, closeness, meaningful social contact, tribalism. Where are they to get that? There’s some semblance of it in niche internet and gaming forums, in music, and especially EDM music. Jillette hopes in the next few decades we will find exactly what that space should be so atheists can healthily re-fill the void left behind by the beautiful sense of community that lives within a church.

Penn Jillette’s most recent book is Presto! How I Made Over 100 Pounds Disappear and Other Magical Tales. Penn Jillette: I very rarely look in this kind of proximity when I’m not sexting. If you want to know how to be a good leader watch Donald Trump and don’t’ do that. Don’t do any of that. I realized recently that I do something very close to prayer. And I don’t want to show any disrespect to people by using the word prayer because I know from my friends who are religious that prayer has a supernatural element, that people are actually connecting to a higher power. And I don’t want to show disrespect to that. But I also want to make a little bit of an argument. Sam Harris makes his argument for atheist meditation. I want to make a little bit of an argument for atheist prayer. I do something before I go to sleep at night called Penn’s guild roundup. And Penn’s guild roundup is I go through conversations that I’ve had like tonight before I go to bed I’ll think should I really have made that sexting joke when I was at the Big Think. Should I really have done that? Did that make people uncomfortable. Is that a line. And I’ll run through how I could have done that better.

I say that with no joke. I’ll actually do that. And I run through conversations I’ve had and things I’ve done. One that comes up every night was, you know, should I treat Teller better? And the answer is always no. But I do reflect about it. I do think about it. I also try to think of what I want and how I can get there. Now I’m very fortunate because when I go to my desires they’re not very often material desires because my family is well cared for. I’ve been very lucky and I’ve done well. But I think about – I used to think about my weight and one of the things I used to – and I’m very hesitant to use the word because I don’t want to show disrespect for those who think it really is supernatural. But I would pray to be able to control the watts of my diet. Wouldn’t that be great? And I try to run through how to do that and I do believe with God there’s a lot of throwing the baby out with the bathwater. I’m not referring to baptism there. I’m referring to the fact that so much of the social and personal elements of religion are really good. I would say maybe more than good, maybe very close to necessary.

Try to find ways for people to get together and help each other and be in celebration and all over this country now. When I first started talking openly about atheism the country was set at about .8 percent for atheism - .8. Less than one percent. And now some polls are giving you over 20 percent. I don’t think that people are being created as atheists. I think they’re just simply coming out of the closet and we have to show a great deal of gratitude to the religious people in the U.S. for being more tolerant of atheists so they do dare to come out. But I’m watching now a lot of my friends struggle with how to get that community in their life. And every community in this country whether it’s the FOMO’s, you know, the former Mormons in Salt Lake City. They call themselves FOMO’s. Or whether it’s the community thinkers in the churches that don’t have God that are in Vegas. Or the DC chapters that are doing this stuff. I hear about all of them. They try to get together and do music and do that kind of stuff.

We’re going to find what that is. You know, maybe that already is a rock concert or something. I don’t know what it is. Or maybe this is, you know, EDM music or EBM. Maybe it is that and I’m just not hip to it. But things are happening in that. But also personally. We have to be very careful when we throw out talking to God we don’t throw out self-reflection. And I also don’t think and I think there’s some religious atheists who would disagree with me on this strongly. But I think it’s okay to talk to an imaginary power if you’re sure that power is imaginary. There’s this nutty thing it’s like a Zen cone to me. Placebos work even when we know they’re placebos. That’s one hand clapping. That’s harder than one hand clapping. Placebos work when you know they’re placebos. To do my weight loss one of the things I did with Ray Cronise, Cray Ray, was to put myself in a cult. I used a lot of the techniques of a cult in order to get my weight off. I pretended that Cray Ray had answers to all my questions. Any question I asked Cray Ray would answer. Now we knew in advance that he could be making up stuff.

But I needed that. I needed someone to give me the answers. He also cut me off from my friends by saying don’t talk about your diet to them ever until you’ve lost your weight. Don’t ever talk about it. The first rule of Cray Ray, don’t talk about Cray Ray. Do this on your own. We knew we were doing that kind of stuff. We knew we were cheating. And it worked. It worked, you know. You can pretend. I think sports people do this all the time. They pretend that winning a game is a life and death situation. They know it’s not but they believe it when they’re playing whatever games they play. Why I used a sports analogy when I don’t know the rules to one single sport is beyond me. Bad rhetoric. That’s why I did it. But I also think there’s a lot from prayer in just self-reflection. You sit with yourself. I like to do it right before I go to sleep. Lying in bed going over how could today have been better. How can tomorrow be better. How could I make my own life, my family’s life and the world just a little better. And I’m not talking about working hard and busting your ass. You don’t have to be a hero.

Just how much better. Could I have been more polite to my barista? Those are the kind of things I ask myself at the end of the day. I think that we’re going to find in 20 years that we have pulled, just sucked out of religion all the good, the community, the self-reflection, the compassion, the love and thrown away the bad, the God, the hate, the superstition. Let that go away. Let the reflection of the community come back in. And I pray you’ve understood me.